A small glimspe at the possible future 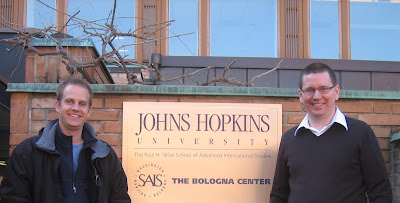 Our friend, Yale, stopped by Bologna for a quick visit on Friday. We met Yale at Arizona State University while he was attending Law School. He now works for the State as a Forgein Service Officer over Agriculture. His travels for work have been amazing.

While on his 2 week European vacation, Yale stopped by Bologna for few hours to catch up with us. We met at Antica Bologna, a great Pasticceria around the corner from Johns Hopkins SAIS Bologna Center. After eating our yummy selections and enjoying our cioccolata calda and orange juice we headed to the school for a brief tour where we found out that Yale is related to our friends the Anderson's! Very small world! 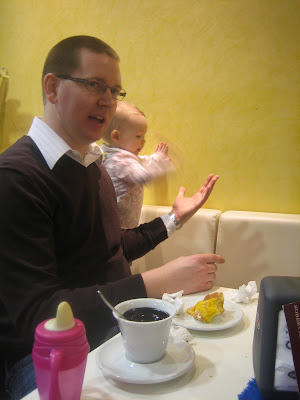 Tyson was mid-sentence with Yale. And Taryn was only concerned with making new friends with the people who sat next to us....and trying to get out the front door.

I ran to my Italian class while Tyson showed Yale around the center of Bologna and then they parted ways, Yale to the train station on his way to Milan, and Tyson & Taryn back to school.

His visit with us was short but fun. It's always great to see a familiar face again. Yale also filled our minds with endless possibilities of jobs after Tyson has finished with his Master's. There is so much Tyson could end up doing that it's hard for us to picture what the future could hold for our family. Later that night Tyson and I talked about the very real possibility of traveling and living abroad as part of his work experience. There's also a possibility that we will be in the States for the rest of his career. What ever path we end up on will be full of adventures, I'm sure. Our minds are spinning!
Posted by Brianna Smith at 7:06 AM