A night out with my favorite guy, Mr.T 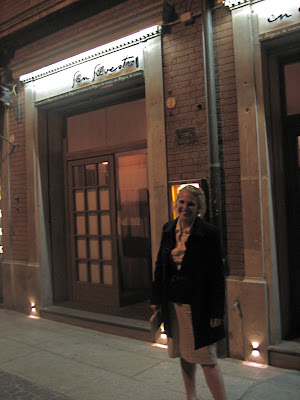 We had to stop and think for a long time. When was the last time we had a real date, just the two of us? I think we settled with California, last summer. That's too long ago.
Luckily, we have awesome neighbors that live upstairs who offered to watch Taryn for us. We've just now gotten around to taking them up on the offer. Taryn slept wonderfully for the two hours we were gone on our official date.

We took the recommendations of the ladies who watched Taryn, made reservations, and ate at San Silvestro. We loved the food and told ourselves that we couldn't eat that much for a long time. Tys and I both agreed that we ate the best prosciutto ever during that meal. We had only gotten to the Primi piatti when we both said we'd be happy and full to stop there, knowing that we still had the Secondi piatti and contorno coming. Besides one man who sat by himself, we were the only people in the restaurant for one hour. Restaurants here don't start to act alive until 8:30 or later. Even though there is never any rush to eat, we were done within 1 1/2 hours. We grabbed some of the best Gelato I've ever had, (how did I make room for it!!!) and walked home. It was a wonderful, much needed date for two and we're thankful to the girls upstairs who made it possible.
Posted by Brianna Smith at 5:55 AM