Saturday was a full of sunshine. We were able to play in the sun at the park while Tyson played basketball and Taryn met a special friend. She was enthralled with the juggler and tight rope walker, as you can see in the video, she would not move an inch! He was kind enough to let Taryn play with his juggling balls while he performed for her and a lady that had just walked by. I was amazed by how skilled he was as he managed to go from a standing position to a "I'm just relaxing on my hammock" position ,when I was really thinking- how comfortable can a thin piece of rope be when you are laying on it?!?)- sorry I didn't catch that part on video, I had to run after Taryn!

Watching him and many others practice their unique talents made me think of my brother's family who live in Oregon as they have spotted all sorts of interesting hobbies at the park as well. It reminds me of all the fun street performers we have seen and the varied instruments they play, Banjo, harp, flute, guitar, violin, accordion, one man band, keyboard, trumpet and the list goes on and on....

As you will see in the video, Taryn loves to pick up cigarette butts (what I thought was dirt at first!) So we keep the hand sanitizer handy! Gross- it makes me wish that no one in this world would smoke. Also- sorry the video is a little bumpy. I was pushing the stroller over the grass and filming. Not a great combo. 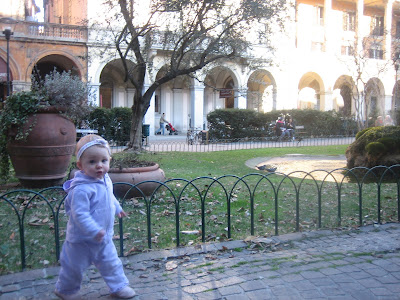 We met up with Bill and Andrea for some gelato at one of our favorite places too. Taryn took advantage of having two parents with gelato, going between the both of us to get in a good taste before walking around more. Tys lifted her over the tiny gate -the sign says "No Dogs" not "No babies" - so why not :) and Taryn went straight to the pigeons and then to the pond. Luckily Tyson jumped over fast enough to catch her before she jumped in . 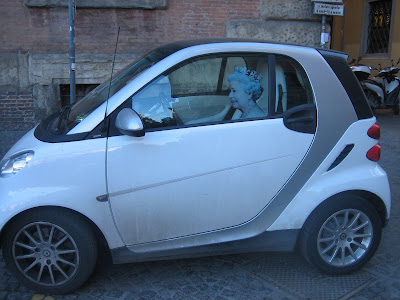 We saw that the Queen of England was out and about again in Bologna in her Smart car. Smiling, no less. ( I laugh every time I see it, and then as I watch others who are seeing it for the first time) 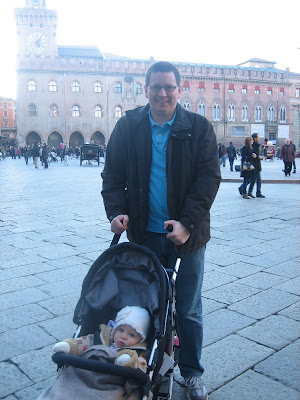 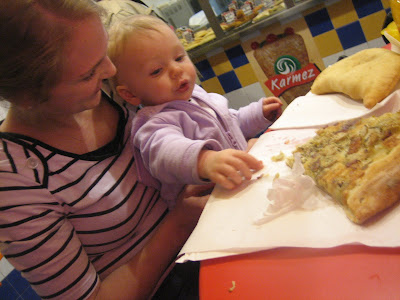 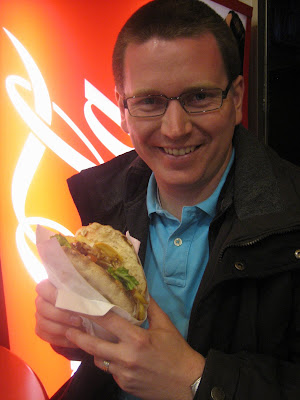 We did a little shopping and grabbed a bite to eat before going back home. On Sunday we took a walk in the park and met the Andersons there. I love that the park is so close and I know our days will be filled with park outings from here on out. I walked into my Italian class today and my teacher said, "Ahh, prezzo il sole!" Yup- I got a lot of sun this past weekend. And it was wonderful. We've pulled out Taryn's sun hat again and we're thinking about buying some sunscreen soon too!
Posted by Brianna Smith at 6:33 AM