Her first trip to Disneyland! 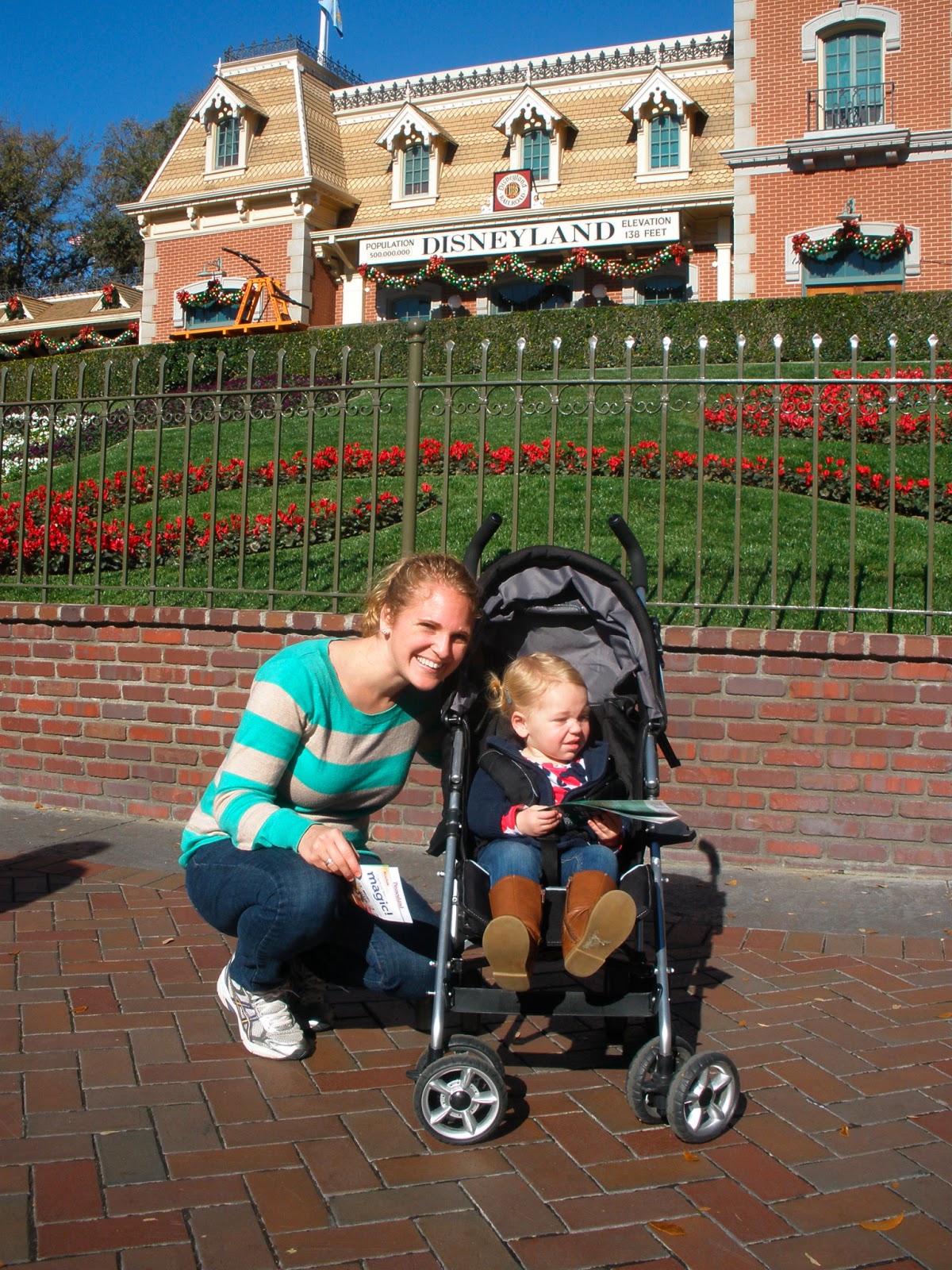 Grandma and Grandpa Smith took Taryn to Disneyland for her first time ever! Tyson and I had talked about when the right time would be to take her because we knew that we would be visiting Southern California often and a Disneyland trip is a must in any child's life. We knew she was at a fun age but we had no idea how perfect she was for it this season! She got so excited to see all the rides, the characters, the fun displays everywhere- and to top it off it was Christmas so of course we saw all the holiday words she knows how to say- "Santa!" "Reindeer!" "Snowman!" It was like a second Christmas for us to be able to witness her taking it all in. I mean, this girl thought the main street train was amazing! Does it get any better?!! Yup!
Thanks Grandma and Grandpa Smith for showing Taryn the happiest place on earth! 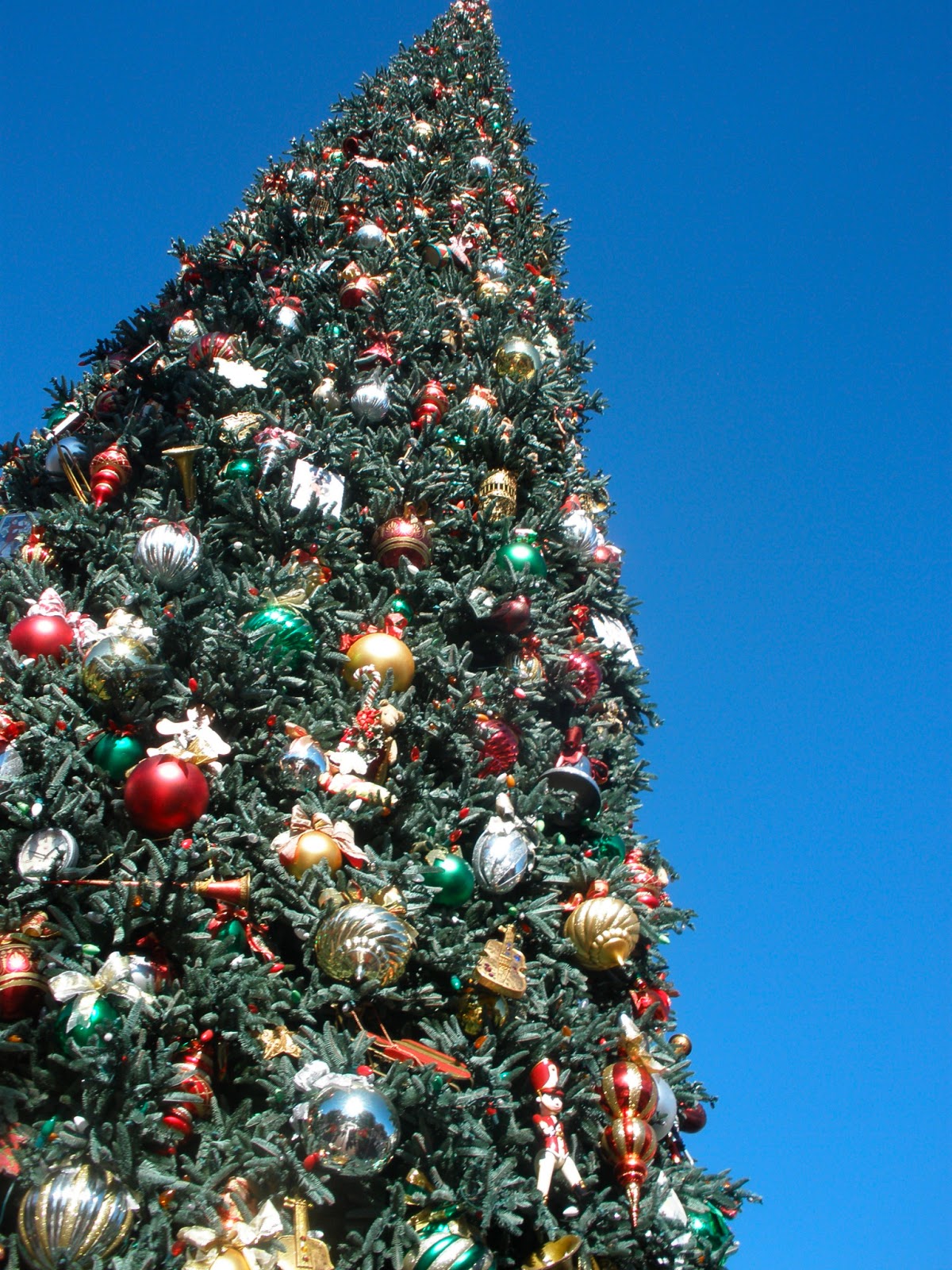 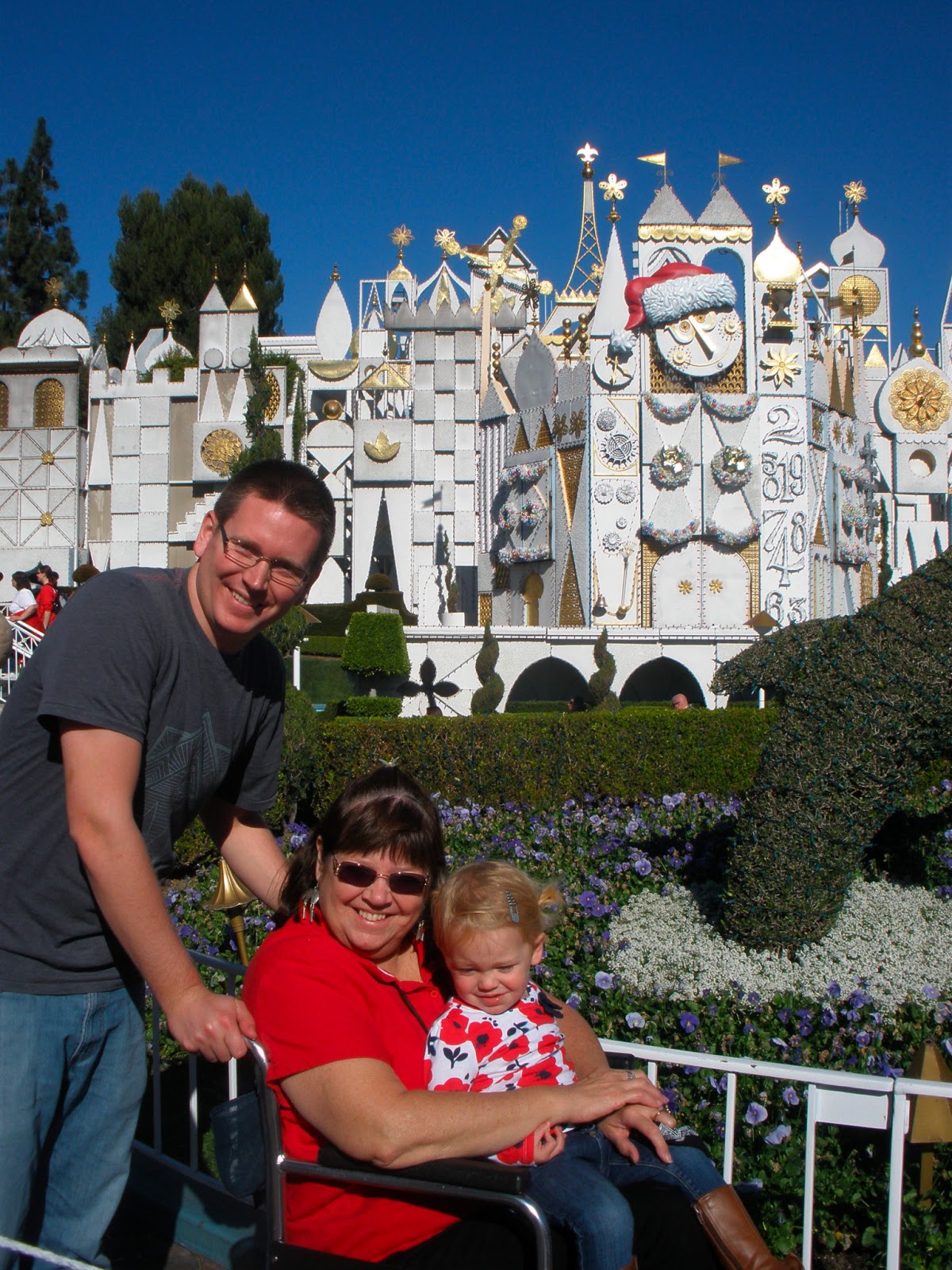 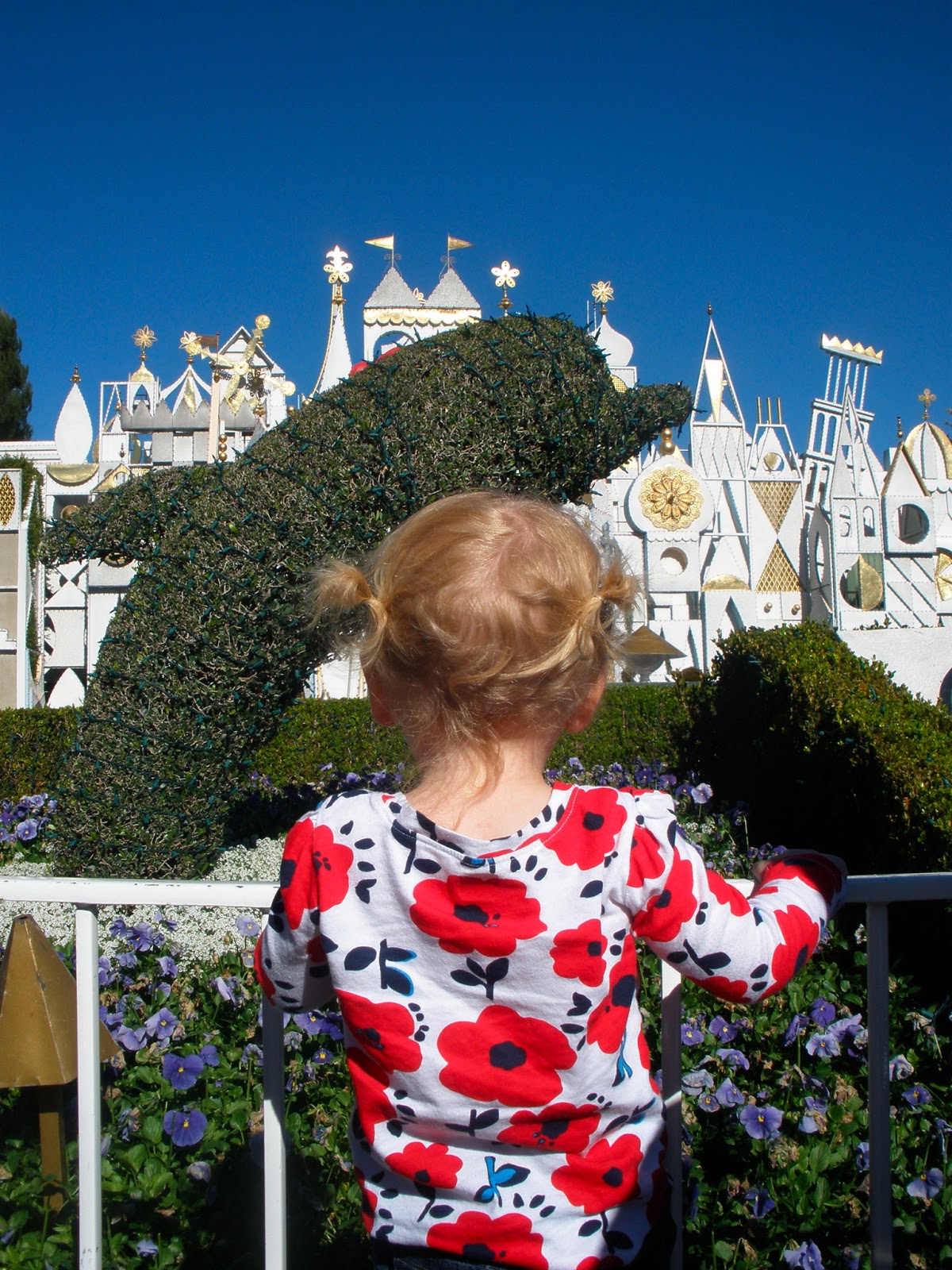 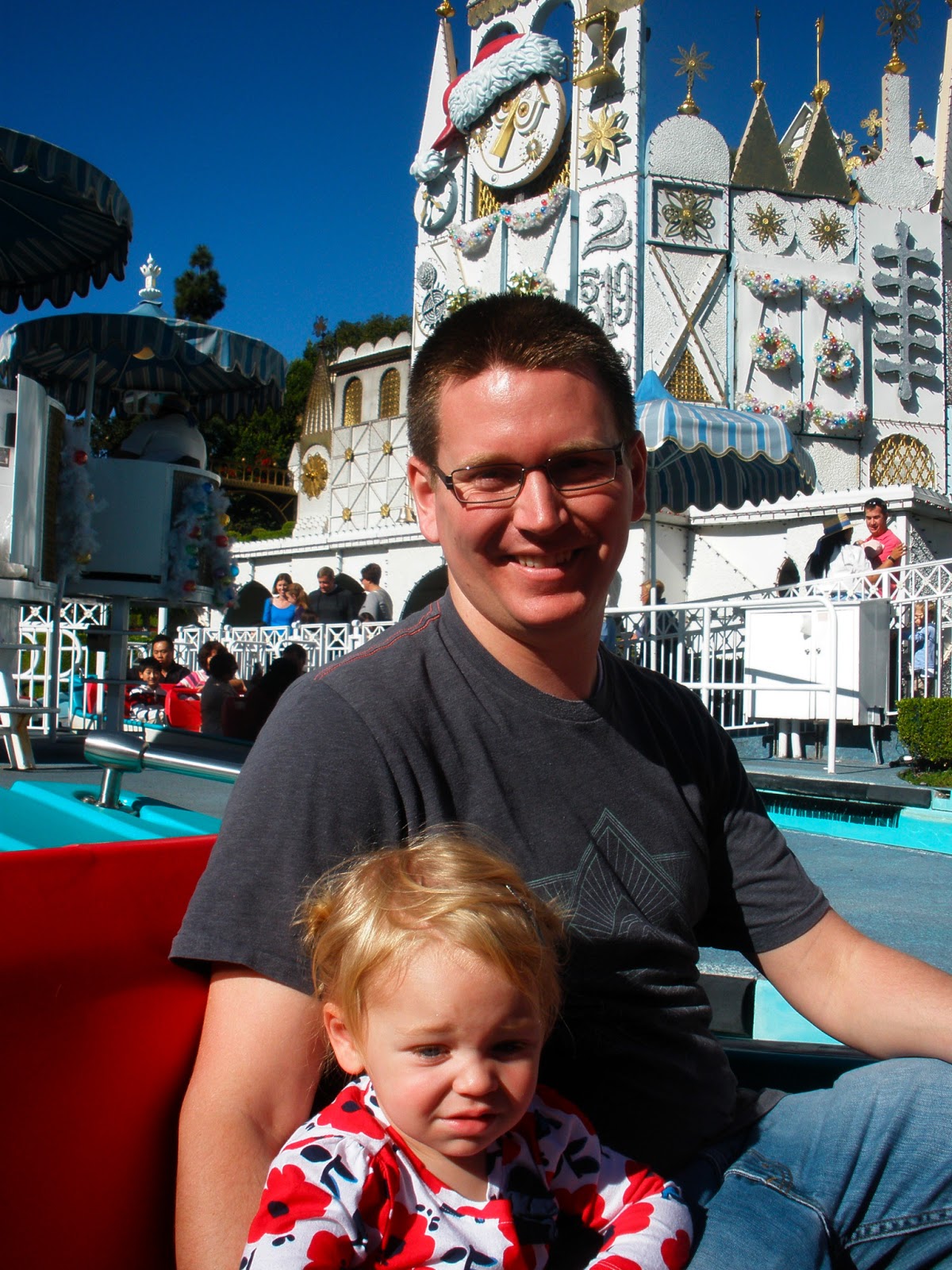 She may look unsure about everything in this picture but you should have seen her jaw drop the second the boat entered "It's a Small World!" I cried (I know, I always cry...) but there is something so magical about watching your child experience Disneyland and all the rides you remember from years ago when you were little for the first time. I know Tyson and I couldn't stop smiling and watching her reactions. 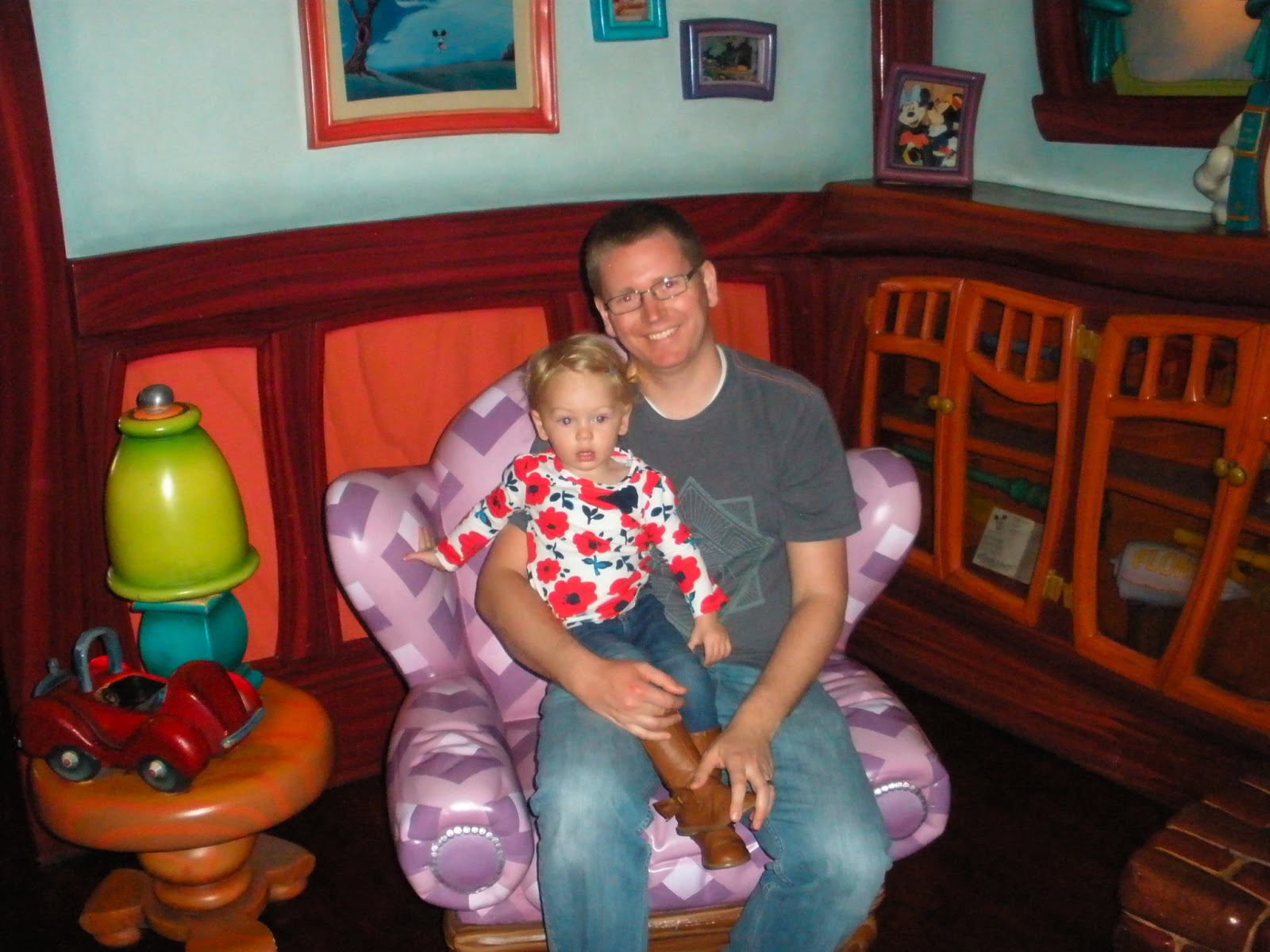 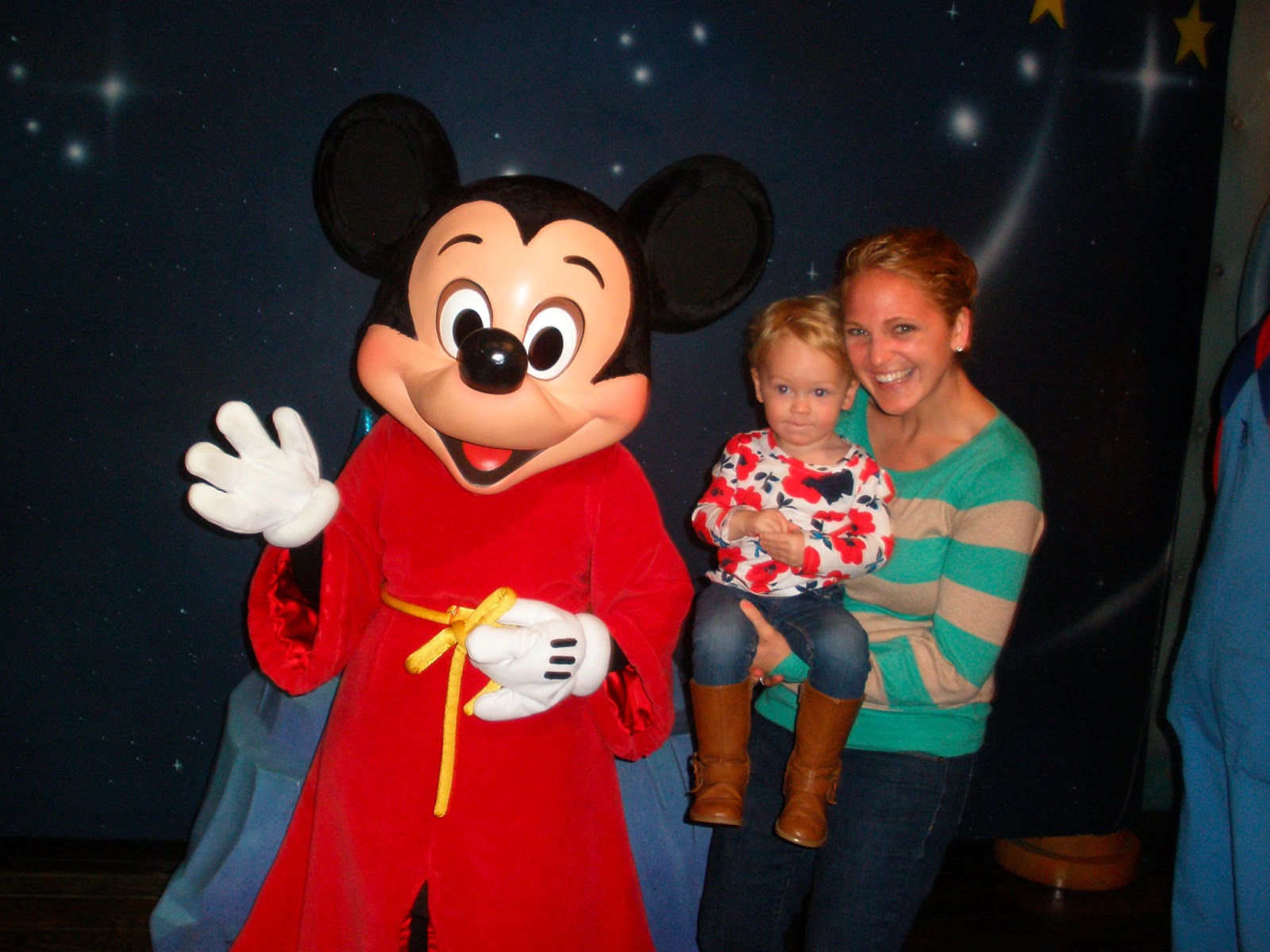 We waited for 45 minutes to see Mickey but it wasn't bad because they make his home in Toontown fun for the little ones. She didn't get scared being so close to Mickey- woohoo! Maybe we will be ready to sit in Santa's lap next year? Grandma and Grandpa Smith really wanted Taryn to meet Mickey (or Minnie- but her house closed the second before we walked in). They were so awesome and made the entire trip about Taryn and her "firsts" of Disneyland. 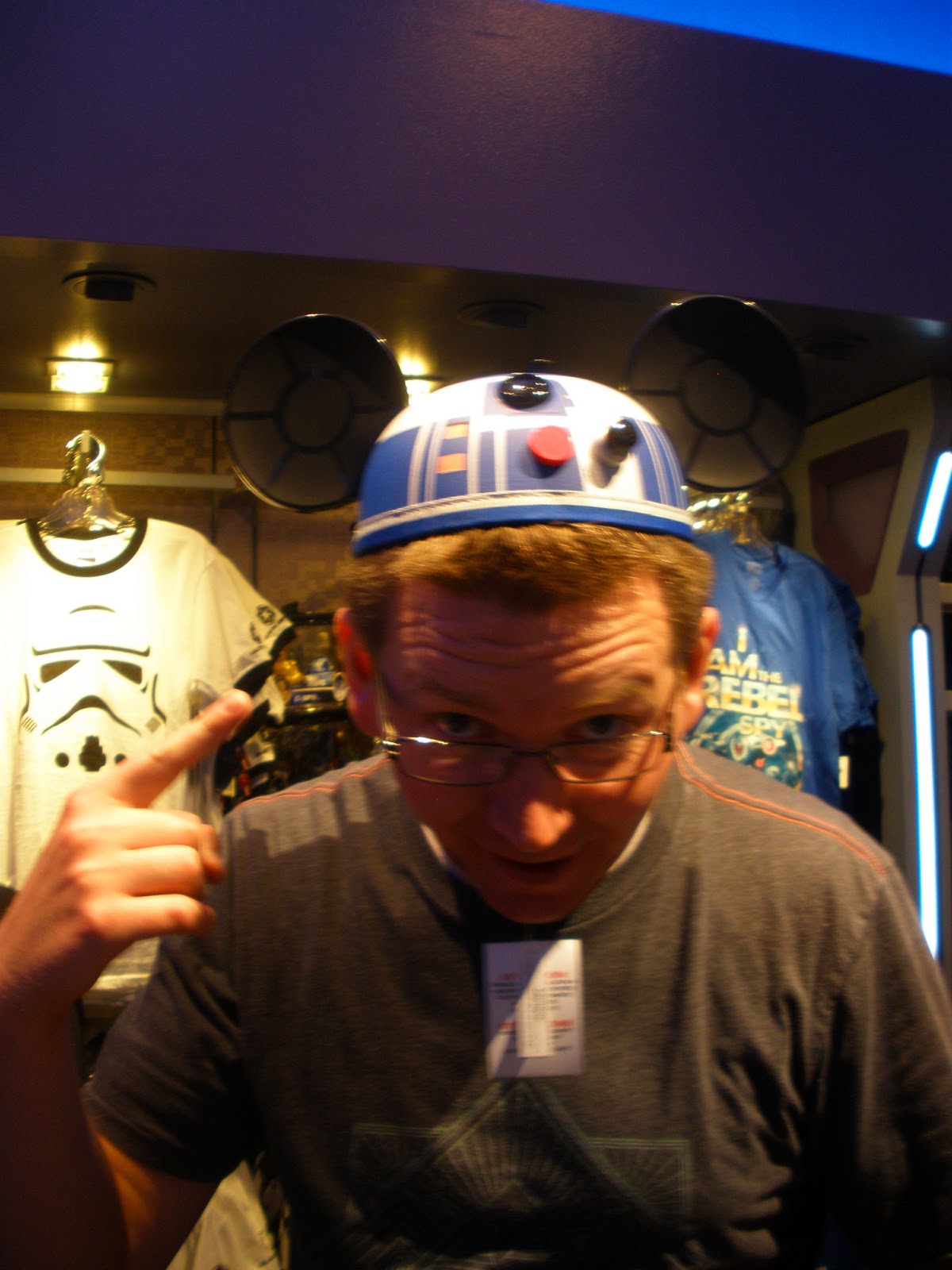 Taryn fell asleep so Grandma and Grandpa Smith went to the one ride they really really wanted to ride- Space Mountain! How cool is that!??!!! Tyson and I stayed outside and wandered- watching Darth Vader fight little kids in an audience and exploring a Star Wars store nearby- Tyson was in heaven! We were sad when Grandma & Grandpa came back early because they ride was closed even after they agreed to wait 75 minutes for it!!! It was the only ride they wanted to go on- bummer! So we made our way to the Parade to get great seats. 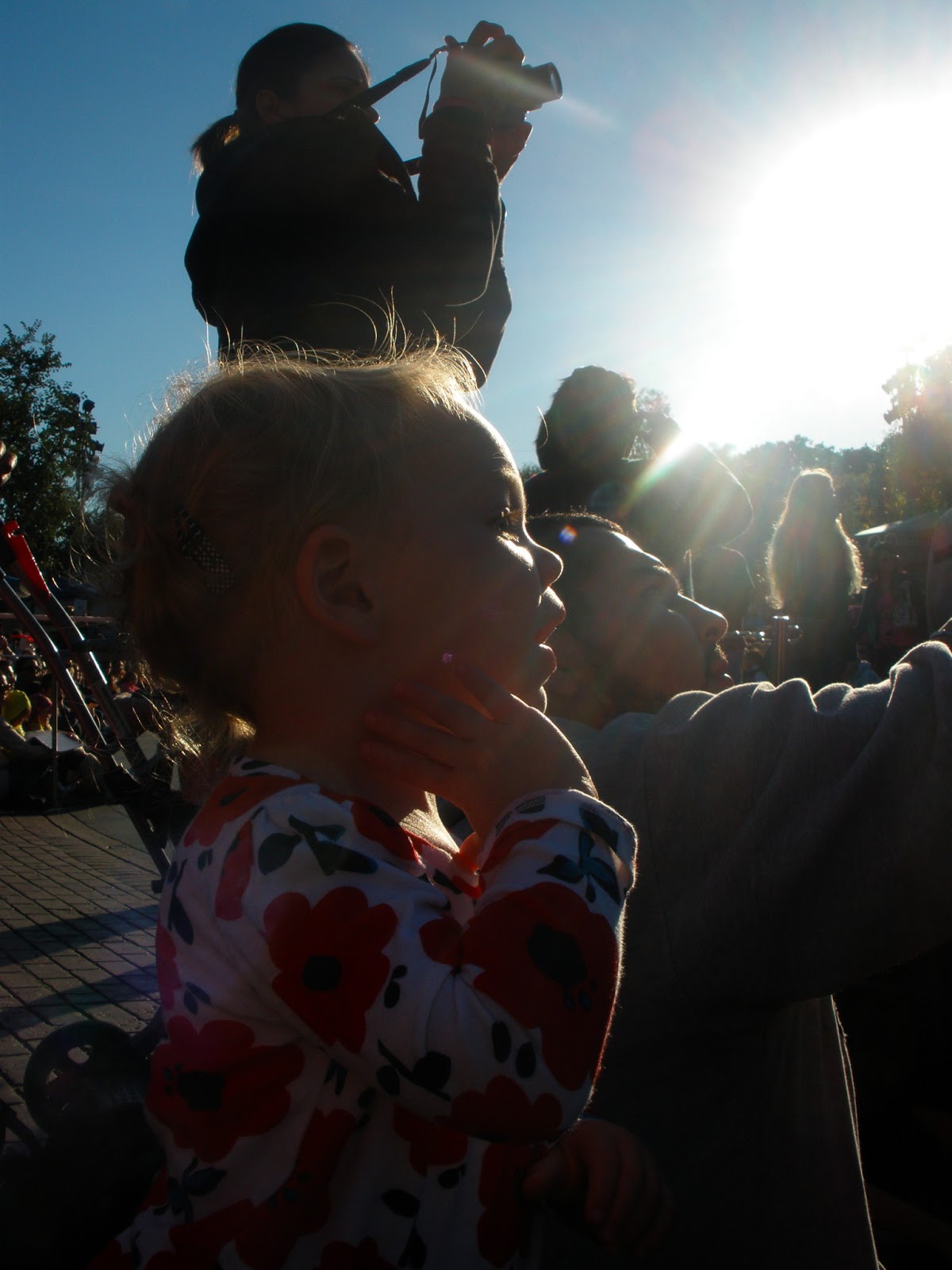 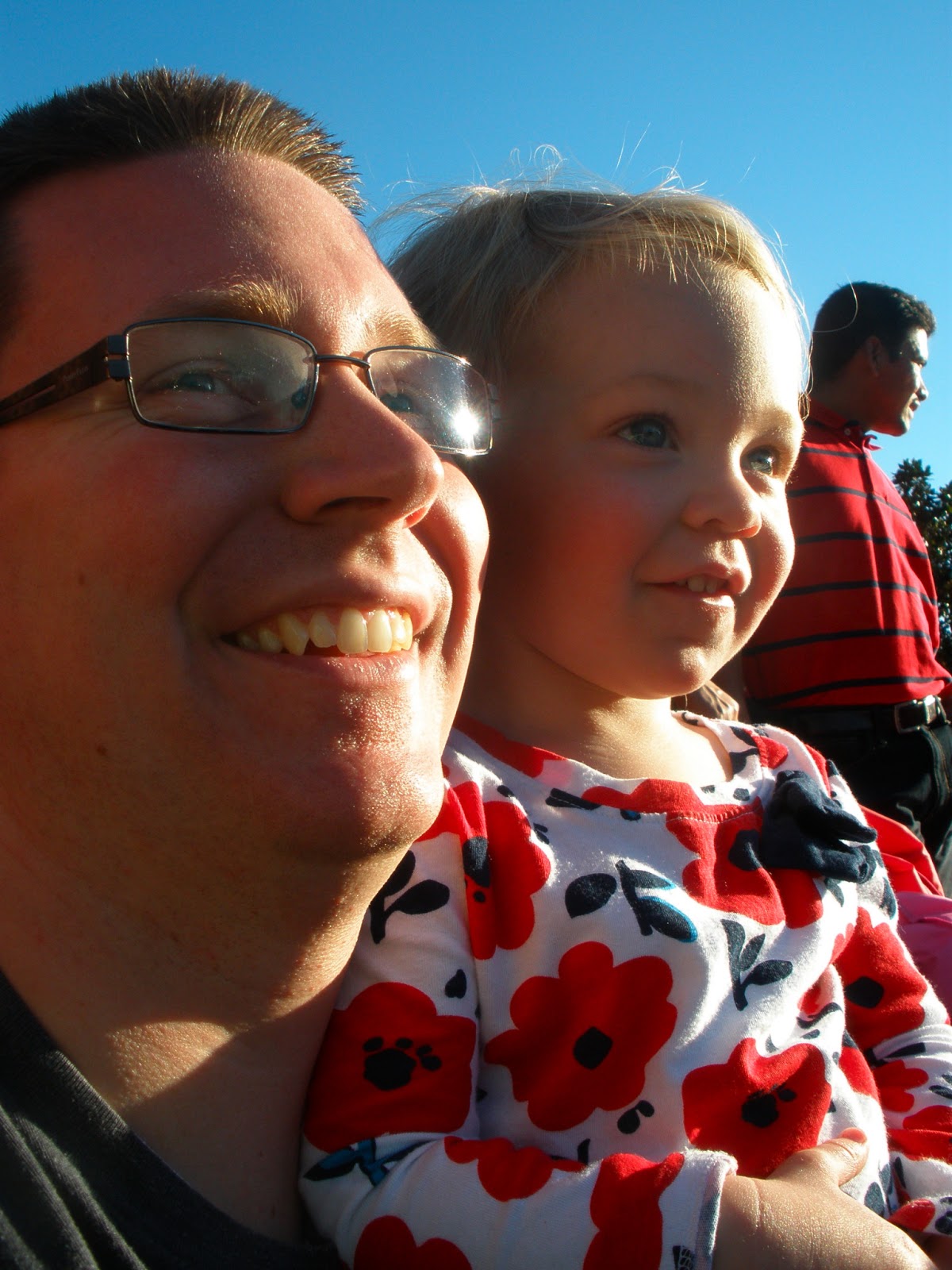 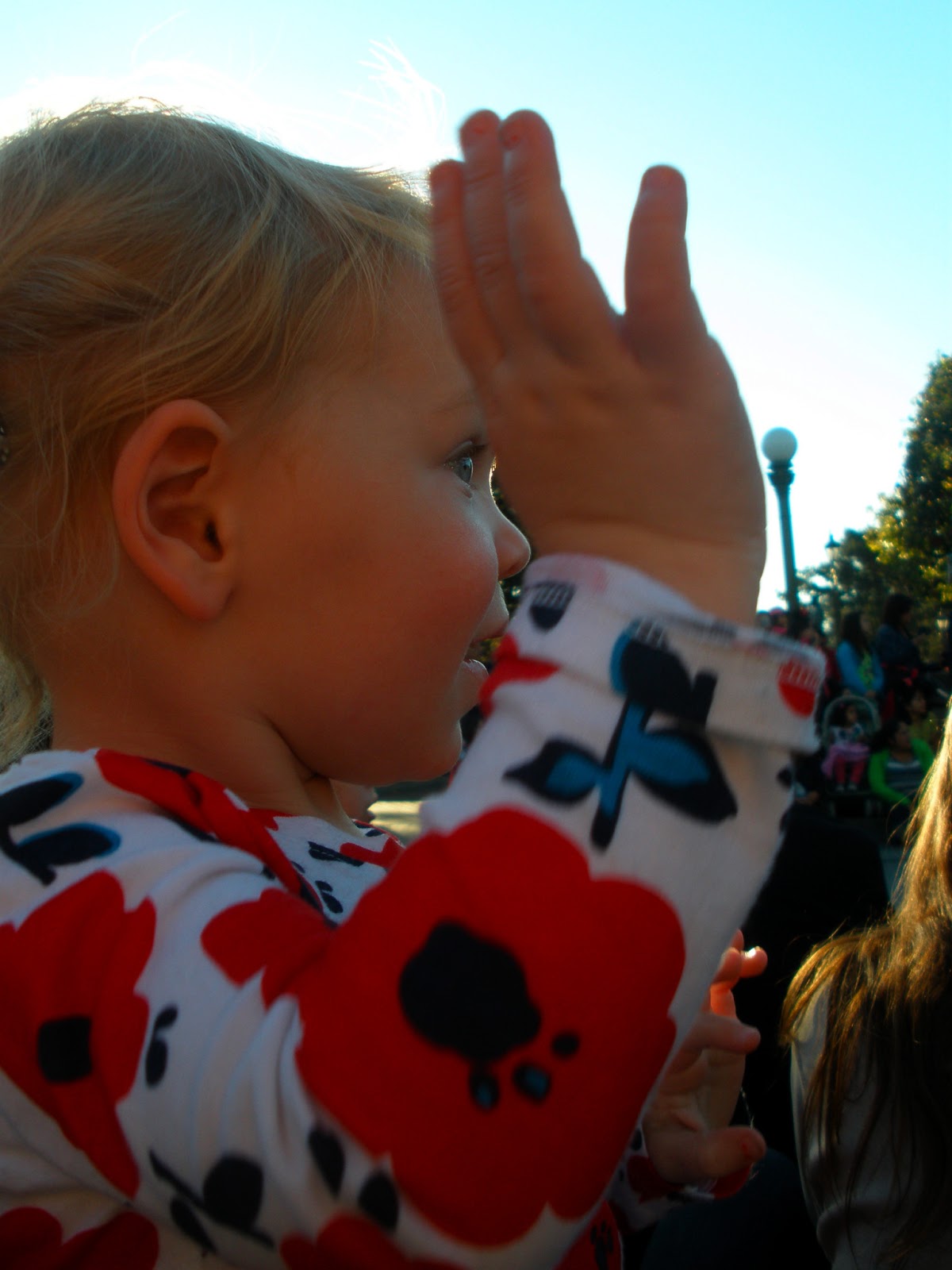 We timed it perfectly and had wonderful seats for Taryn to watch her first Disney Holiday Parade. I can't even tell you how happy she was waving to all the characters, screaming, "Hi, Hi, Hi!" and waving her little heart out. She kept saying, "WOW! Dancing!!!" and called out to the reindeer, Santa, Buzz, Woody, and the snowman. Yup- I cried again. Such sweet pure joy in her eyes made me so completely happy. 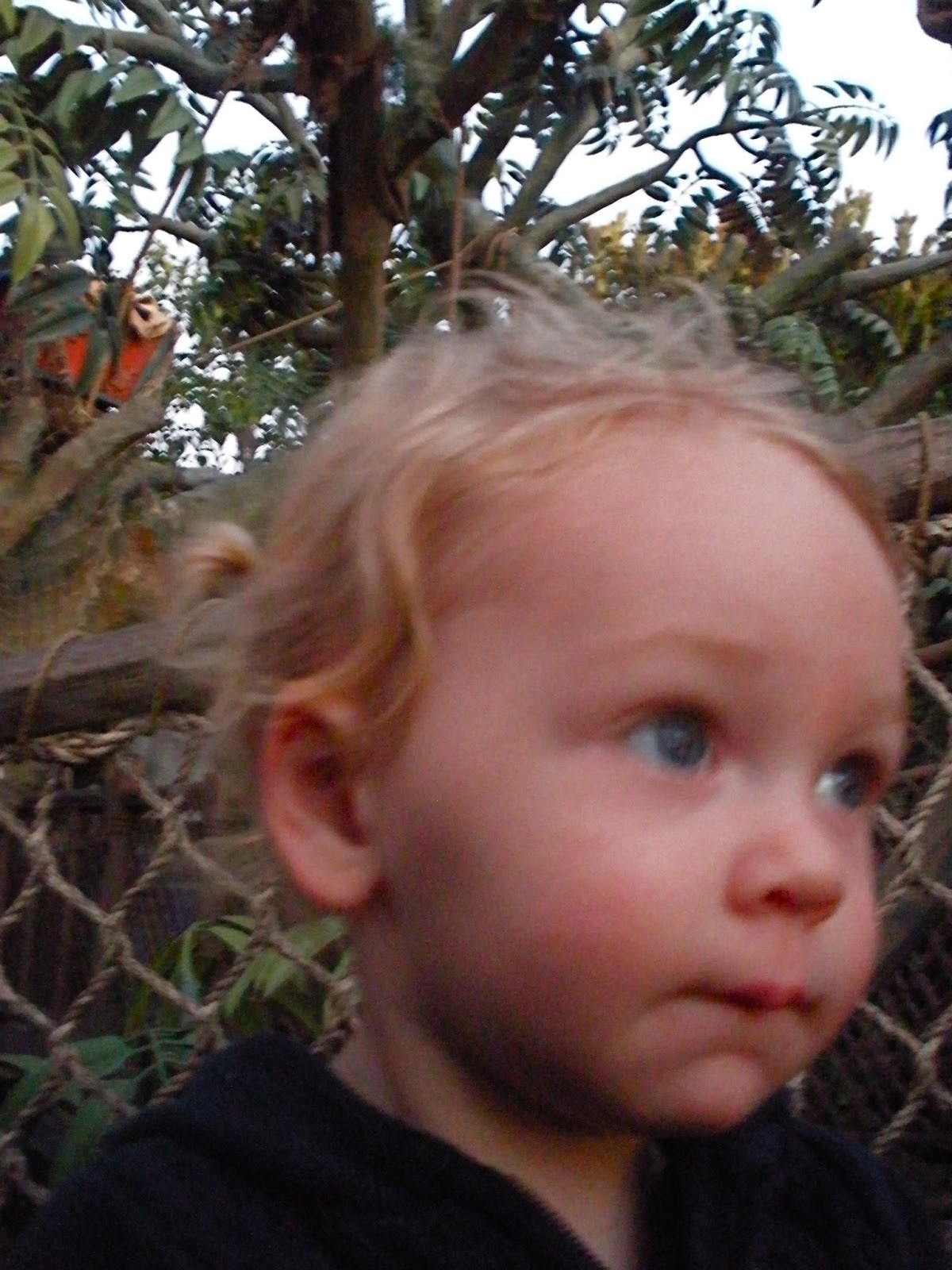 Crossing the bridge from tree to tree in Tarzan's tree House 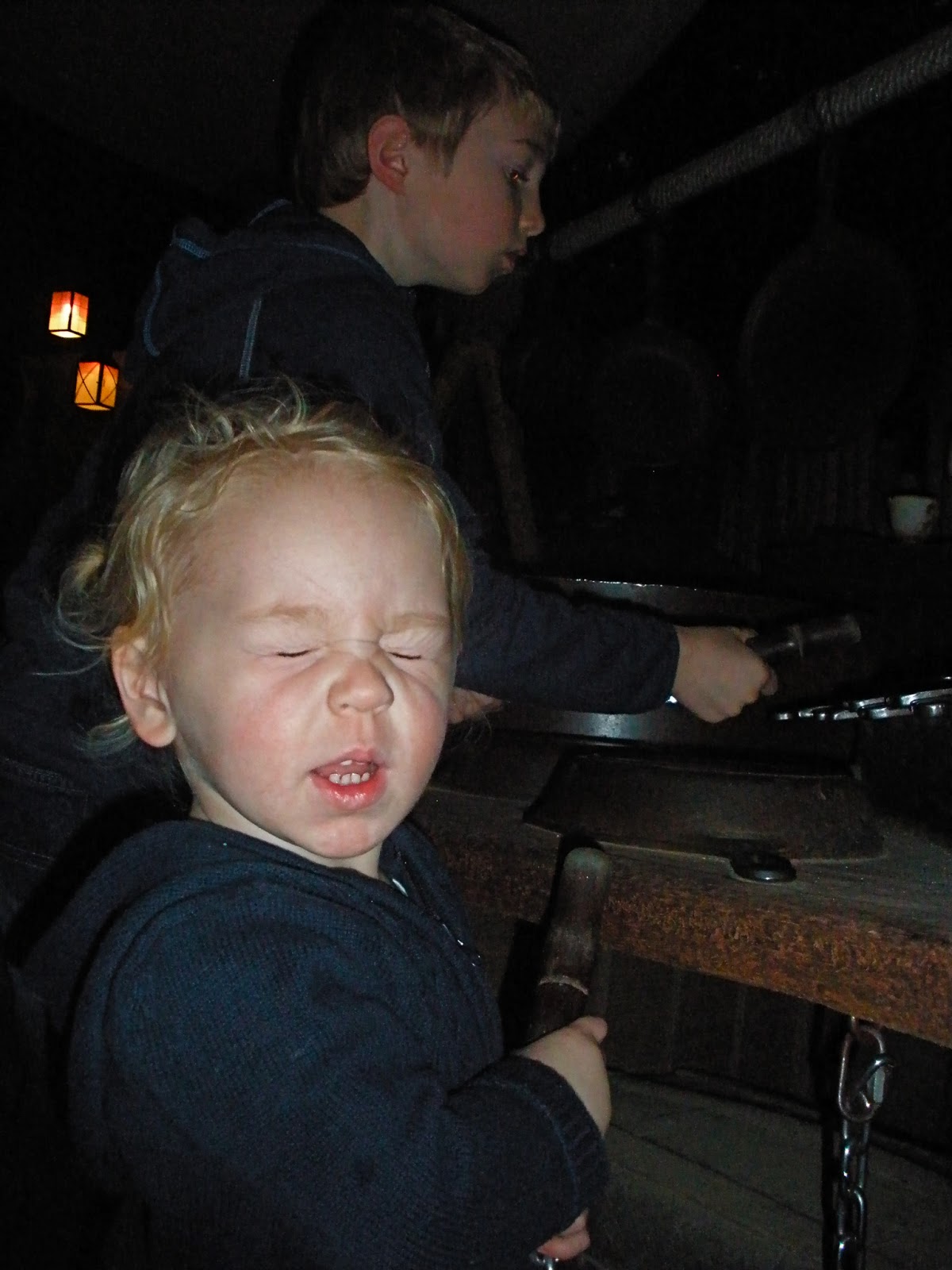 Daddy ---"Taryn, smile!"
After Pirates of the Carribean, Tyson took Taryn up to the Tarzan Tree House and they ran around together. 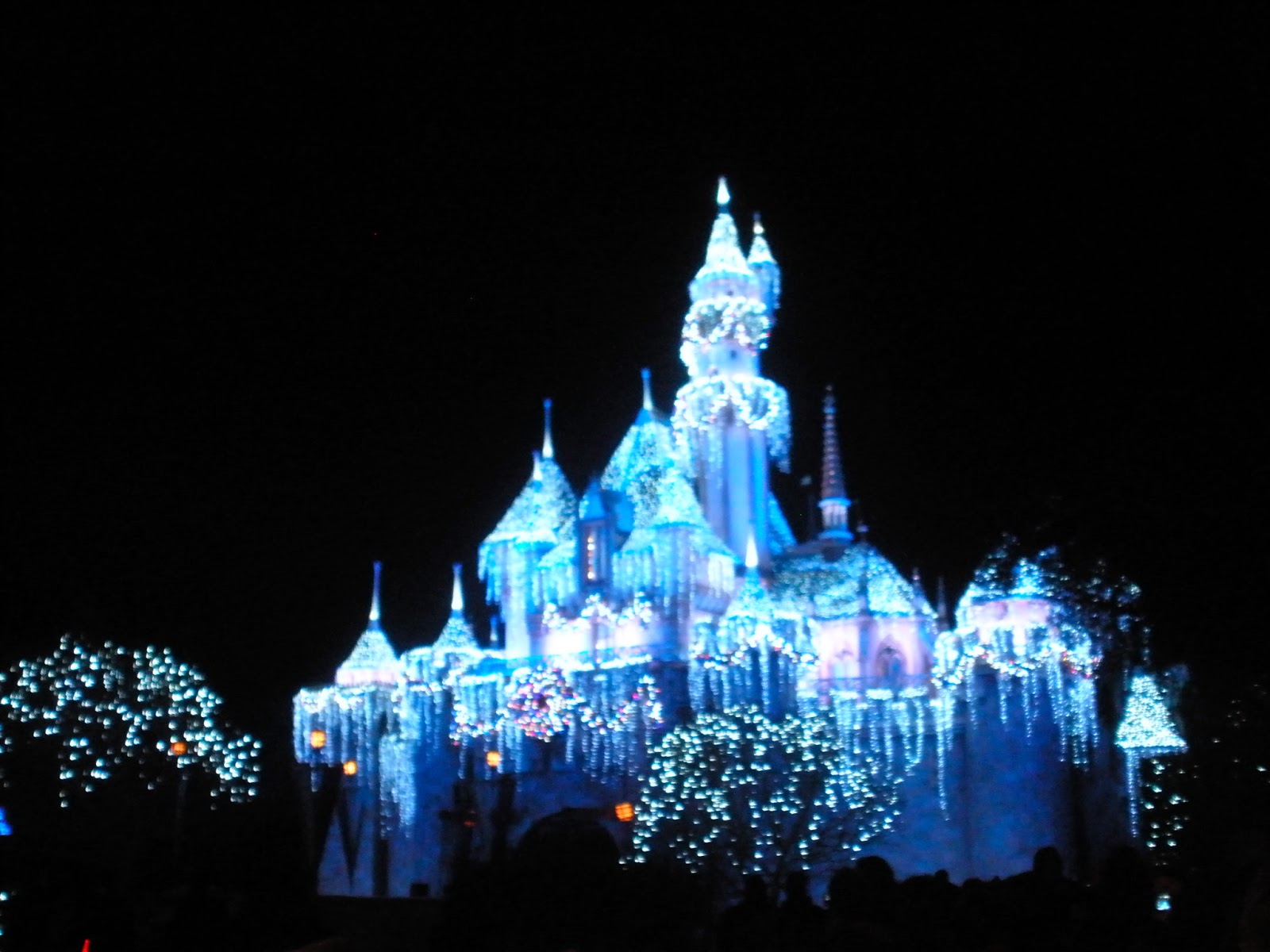 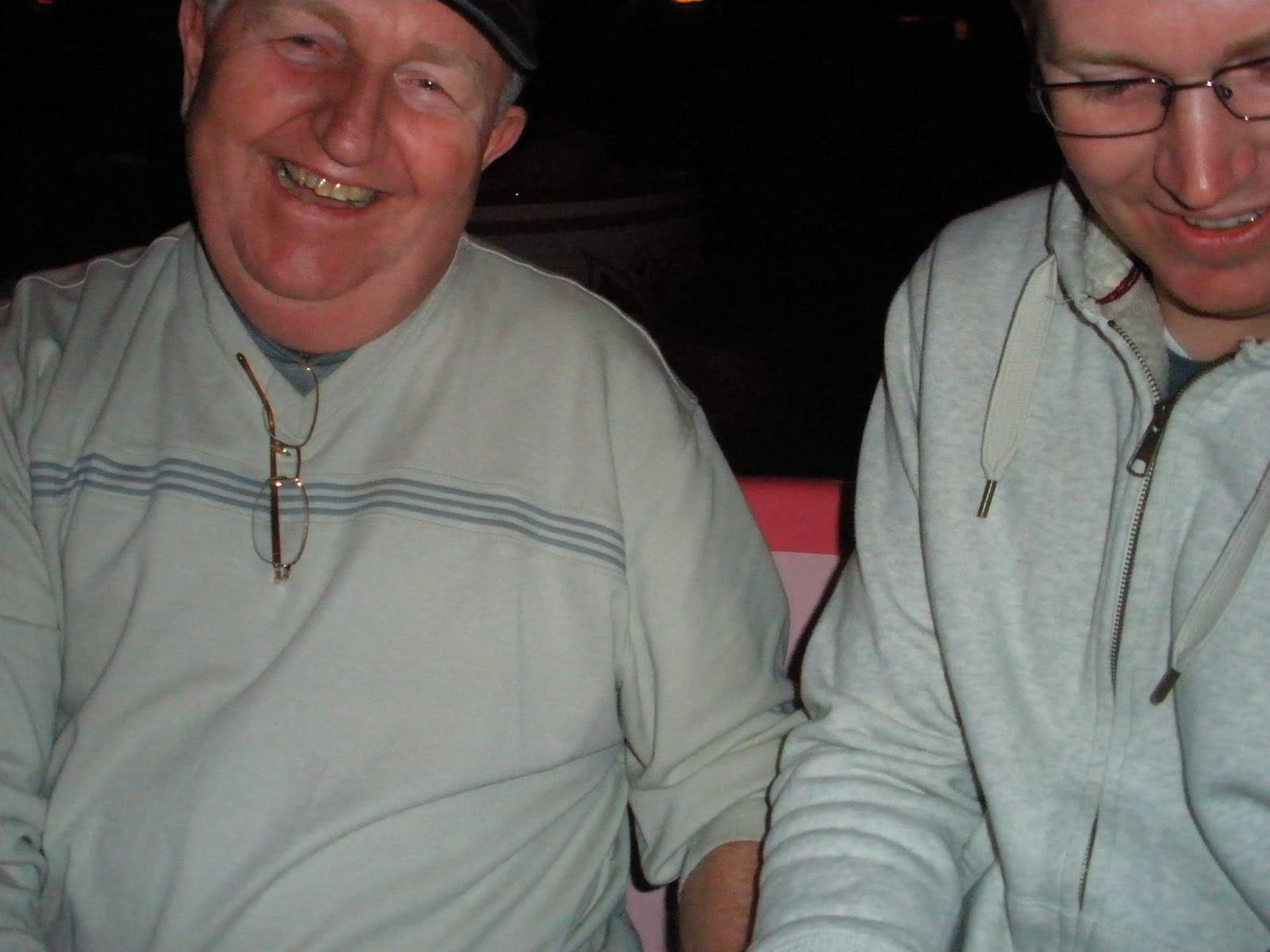 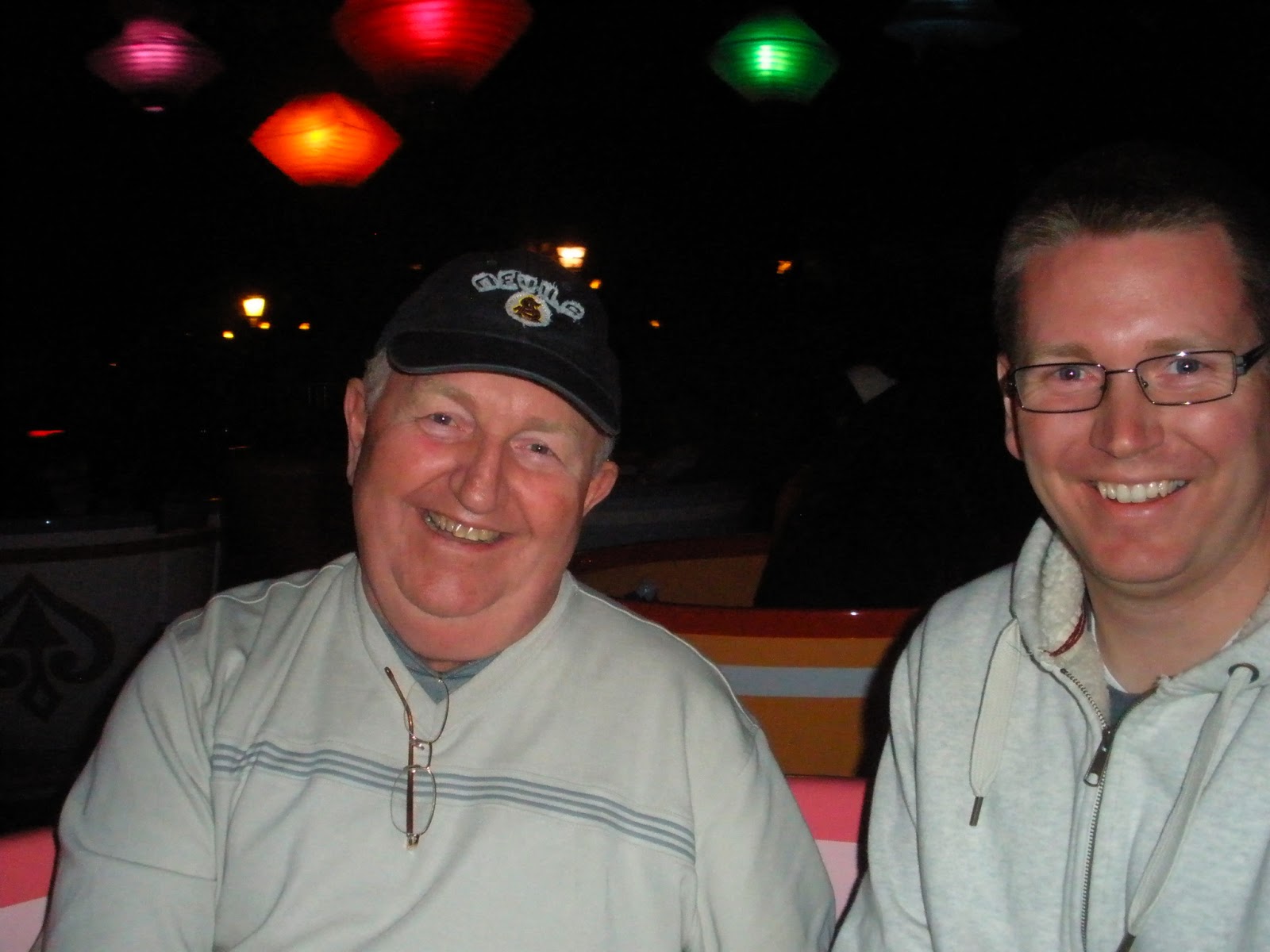 So I don't know how we all fit in that tiny tea cup but we made it work somehow with 3 adults and Taryn. We even had it spinning too. Mike & Tyson were laughing so hard! Taryn instantly put her head in my lap and didn't bring it back up until we stopped spinning. She clapped and said, "Yeah!" when the ride stopped :)

Tyson and Mike also couldn't stop laughing in the Enchanted Tiki room  with all the anamatronic birds!!! I could hear this constant hum of laughter throughout the whole show as each bird and tiki mask lit up and started singing. 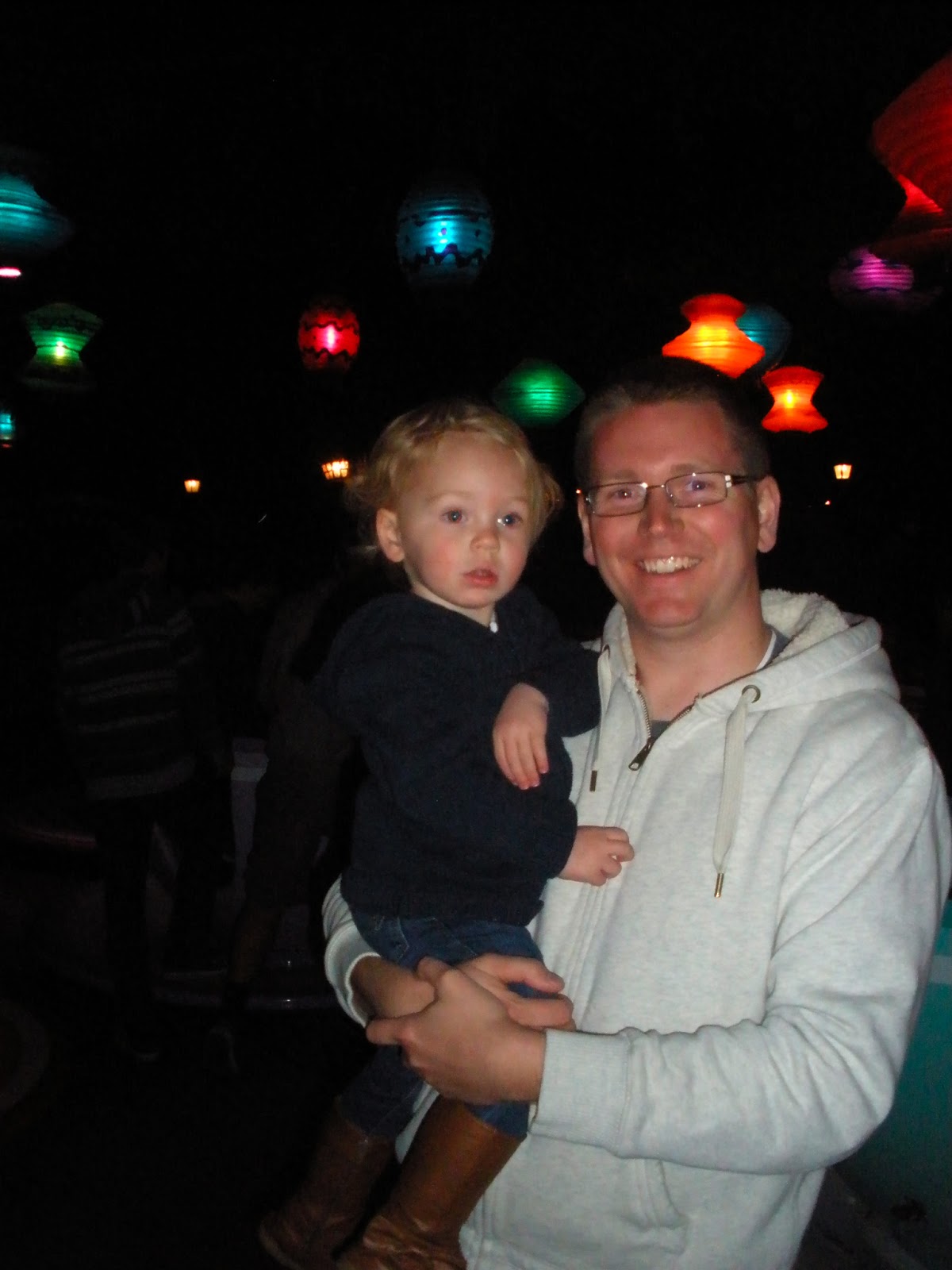 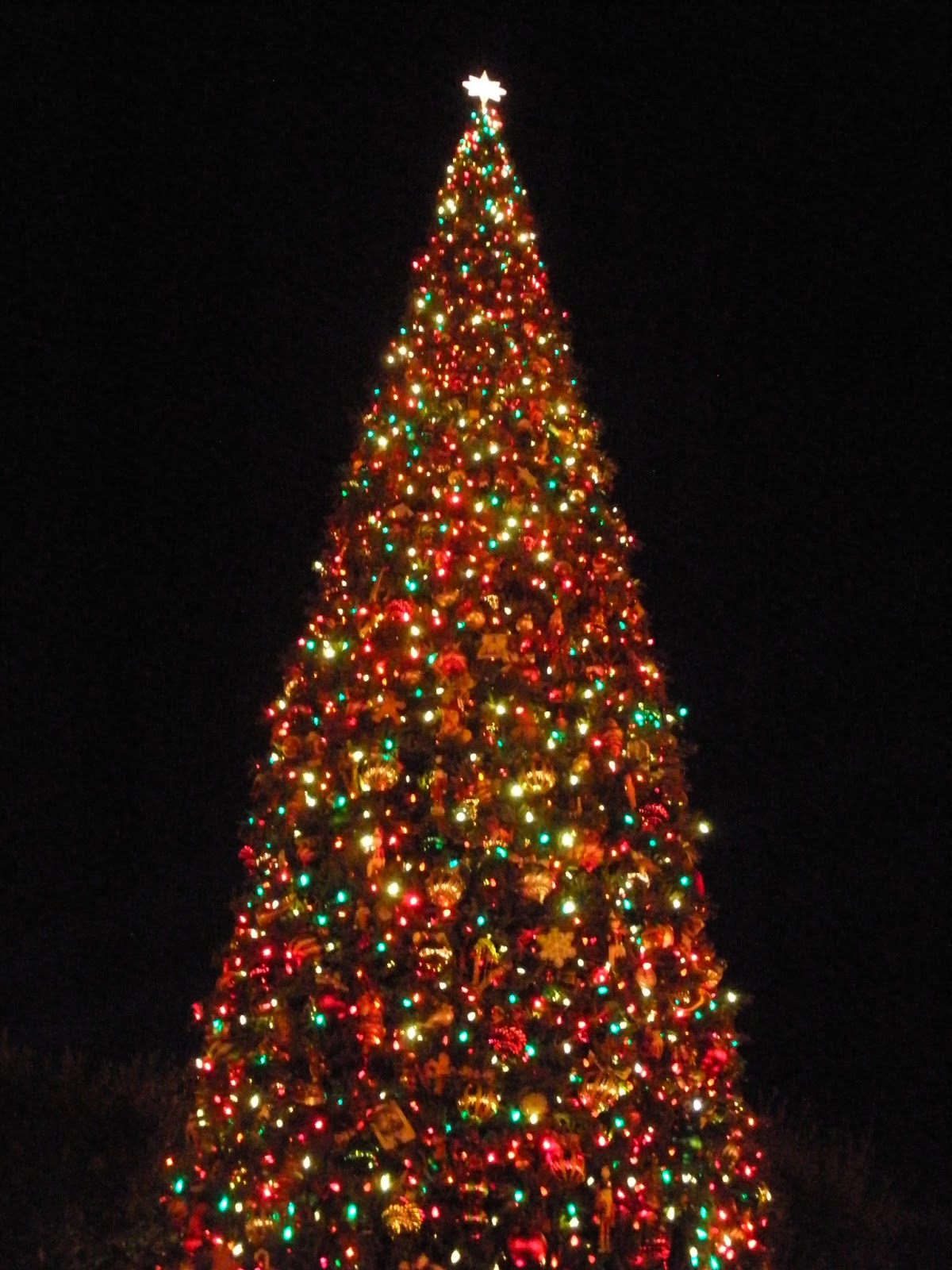 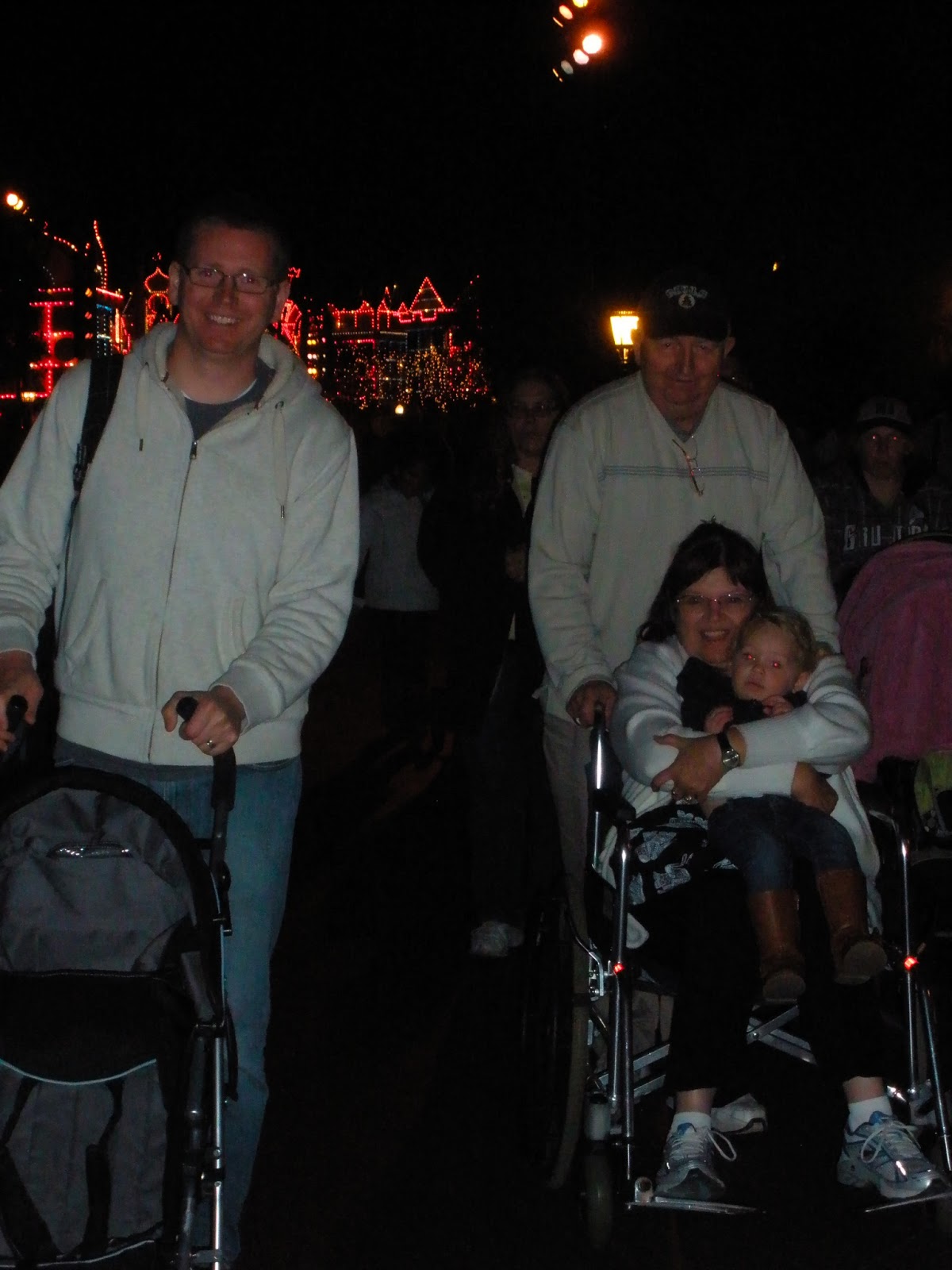 Nothing like a special ride with Grandma at the end of a wonderful day (thanks for pushing, Grandpa!)
There are so many memories we made that day and it was so fun to spend it with Grandma & Grandpa Smith. They made the special trip all the way down to see us, take us to Disneyland, and drive back the next day. They are so dear to our hearts and we love the special time we get to share with them. The day before we went to Disneyland, Mike and Janis told us that we would be careful and go at a speed that was right for Taryn. They said if she was over it and done then we would go. Maybe they knew she would love it but Tyson and I appreciated so much that they were so patient with Taryn even before. They really are the best!

* One of my favorite memories of the day- We were standing in line for Dumbo and Mike had gone back to the car to grab all of our sweaters because it had gotten cold fast. He came by and dropped them off to us in line. We quickly put them on and I stuck my hands inside my coat pockets and found 3 mini butterfinger candy bars. I said, "Tyson, where did these come from?" We had no clue and I couldn't remember anyone borrowing my coat. After the ride we were walking and Mike asked, "So, did you find something in your pocket?" I laughed and smiled as I told him, "It was like magic- you read our minds! It was just what we needed! And we had no idea where they had come from!" He just laughed and smiled :)