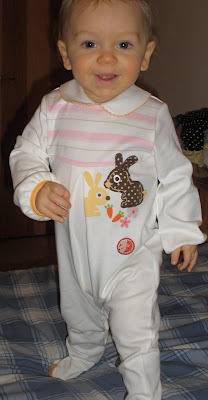 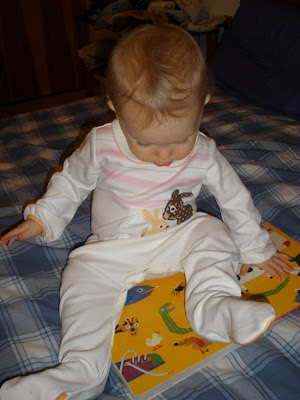 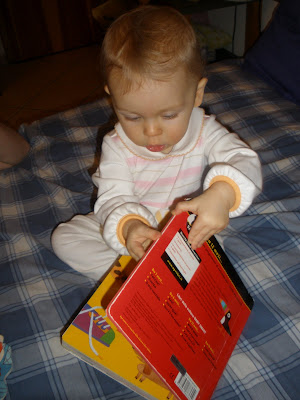 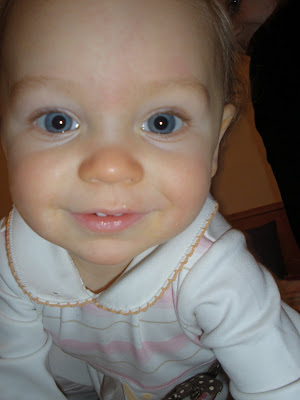 Taryn's personality has really blossomed.
We went out for a walk around the city to do some errands last week. The sun was shining and all the streets were full of people taking in the rays of the sun. I saw a man stop under the porticos where the sun shone through and let the sun hit his face. During Taryn's stroller ride she was pointing at kids, dancing, kicking, yelling, and talking. It was a beautiful day.
She makes tons of silly faces with her tongue and can make some great facial expressions to get us to laugh.
She is trying so hard to put words together. Her two favorite are cheese (sounds like esss..esss..), outside ( sounds like ahsie ...ahsie,) Sometimes she will try to repeat the sounds from words we say to her. I know she's trying hard but it will probably be a little while before she is saying words (when do toddler's start saying more words beyond mama & dadda?)
She loves to give pats on the back, legs, head. Last week she opened our washer mid cycle and water poured everywhere in our kitchen. I was frantically tried to close the door again and stop the water from pouring out the cracks. As I cleaned up the water, Taryn came over and patted me on the back. She made me smile & laugh.
Tyson's toes hang out from the bedspread so in the morning if Taryn sees his toes, she grabs them and says "tickle tickle tickle" (it really does sound like that- I guess it shows how much we say that word to her!)
We can see the grass now but Taryn will not move if she is on it. Don't worry because by the start of Spring she will be running through it (hopefully!)
She likes to yell when she wants something. This is bad and we are trying to stop it
She's starting to use a fork and really really likes the idea of putting things into her own mouth. I loved the advice we read about how to keep frustration down during meal time while teaching your toddler how to use utensils. Mom or Dad should put the food on the fork/spoon and then give it to the toddler to put it in their own mouth. We practice picking food up with a fork and spoon but it will be a while until Taryn has mastered that one. For her, I think it's just fun to hold on to the utensils and try.
We are going to start doing family flash cards so Taryn knows her grandparents, aunts, uncles, and cousins better when we go home.
Posted by Brianna Smith at 4:27 AM