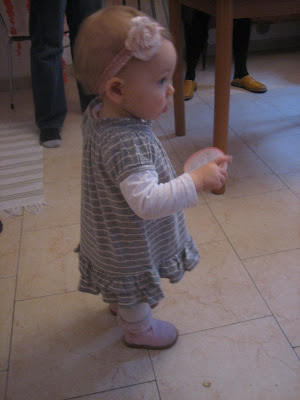 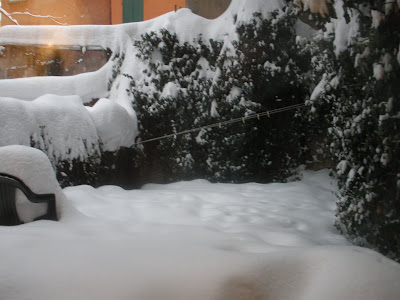 The snow in the Anderson's backyard. Crazy!

We had another snow storm come through Bologna this past weekend and it was cold! I think it will be a few days until we have snow again so it will probably all melt and those poor cars will finally de-thaw outside our door. We've all been dressing in lots of layers just being in the home because the Italian apartments aren't built like the homes in Utah that are prepared for the snow! Burr! It makes me think about what my sister, who is serving a mission in Switzerland, must be feeling! 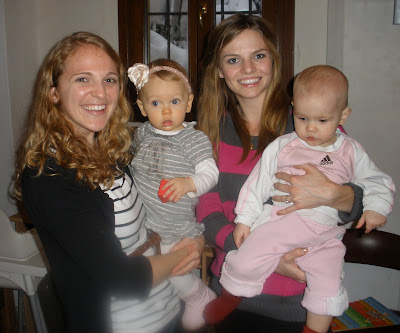 With a fresh spillage of Peach juice on Taryn's dress and an unknown smudge on our camera, I still like this picture

Ada, Taryn's little buddy, turned 1 year old on Saturday. We went over to wish the fun girl a Happy Birthday and watch her eat her first birthday cupcake. Taryn quickly discovered one of Ada's birthday gifts, an adorable German doll. For awhile, Taryn wouldn't leave her little corner she staked out and just held onto that doll so tight, giving her hugs and holding her under her arm. This proved to us what Tyson and I have been debating for a few months. She needs a doll! We are worried that it might distract from her Tiger, a.k.a Mr. Prickle-pants, but after seeing how much she adored this little doll, touching her eyes, playing with her hair, and oh... that bright smile!!! we knew what the answer was. Now if we can just find a cute Italian doll somewhere! (Harder than it sounds!) 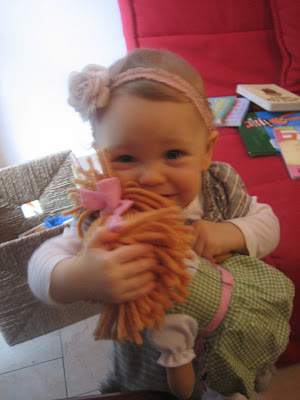 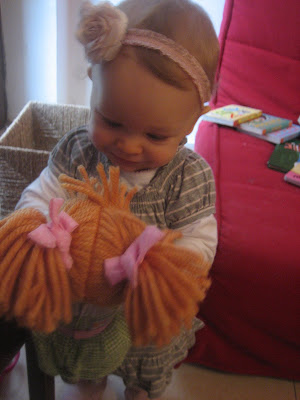 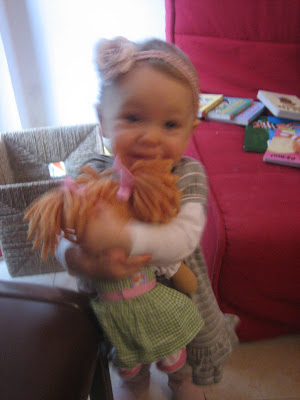 We also enjoyed a yummy lunch at our Bishops house on Sunday. He & his wife are super cute together and I love teaching their 18 month old son Joshua, in nursery. Our lesson in nursery was on sharing with family members to show them that you love them. Joshua took it to another level when he demonstrated over and over again how he can share with Taryn. I was so impressed! And this was the first week that he said Taryn's name, "Tee-rin", again and again. Close enough for me!

On learning Italian-
I am really grateful for my little nursery boys. I taught my first couple of lessons in English because at that time we only had Jordan who knew both Italian and English. But as soon as Joshua & Leone came into nursery, I started to prepare & give my lessons in Italian. It can be difficult because I don't pronounce everything correctly, but I have learned a lot by doing so.

My Italian class started back up again and I love the new teacher. I was ashamed for having been so scared and nervous for a new teacher but I think it will be a great experience. As I sat in class I thought about how much I love being there, trying my best to learn something new. I make mistakes, I forget words, and I stumble, but I am trying. Tyson is so awesome because he watches Taryn which allows me to go to class. We've created a pretty awesome tag-team. I think we'll make shirts or something. At least sweat bands :) 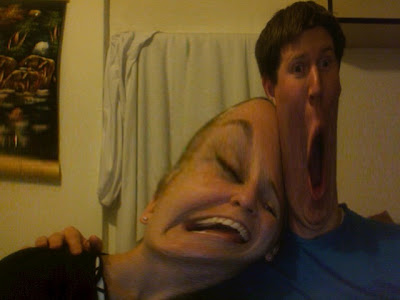 Having WAY to much fun with iPhoto booth "effects", really really late at night. And this isn't even one of the best :)
Posted by Brianna Smith at 2:12 AM