A night with the girls 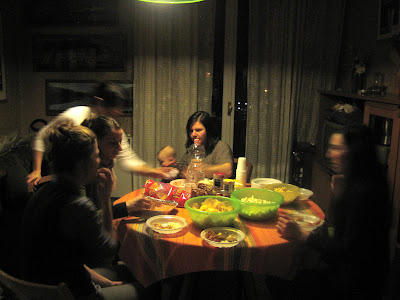 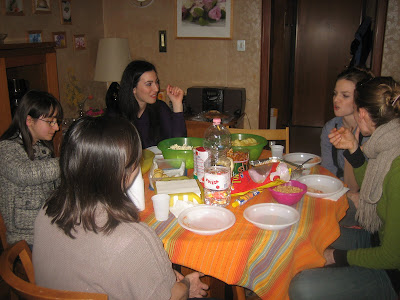 When I shut the door to our apartment, Taryn was still crying in her crib but Tyson told me it was ok and to go anyway. Leaving the house was stressful. I was trying to wrap up dinner for Taryn, get her in the bath, into her pj's and out the door myself. Tyson had gotten home in the midst of it all and I felt bad that Taryn didn't go down as smoothly as usual. But, I knew Tyson was there to watch her so my heart was at ease. Going to Manuela's seemed easy enough even though we ended up having quite the little adventure. I'm grateful to the kind man who let us use his cell phone when we didn't know which way to go and for Julie who found us!

I had so much fun with these 8 great ladies. Laughing and talking and trying so hard to catch what they were saying in Italian. Many of them know how to speak English which was helpful for parts of the stories I just couldn't understand. We ate Hot Dogs, peanuts, pretzels, oreos, ricotta chesse & coconut bites, brownies, and chips & dip. They wanted to make American food and I was happy to supply the chips and dip. I've promised to teach one of the girls how to make Guacamole too. I also discovered this amazing Cipolla paste- sounds weird but it tastes just like Onion rings. I had two, yes, two hotdogs with the Cipolla paste. But don't worry, I put lettuce on the second one :)

Tyson was all for my girls night and thought it was a great idea which is reason #284 why I'm really lucky to have Tyson as my husband. When I got back he had done the dishes (which he hates doing so it REALLY meant a lot to me), fed Taryn her night bottle and put her back to sleep. I felt like I didn't follow through enough for him though. Isn't it apart of some mommy code that if the mommy goes out to play, it means the rest of the family gets a big yummy feast ( burgers, pizza, take-out)? Tyson's dinner was lame but he didn't complain. I came home to him reading for school at the kitchen table. It was a really great night out. Maybe next time I'll get my act together and have everything ready for my family :)
Posted by Brianna Smith at 4:46 AM