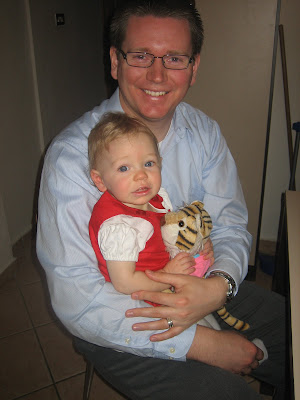 Waking up from her nap to the smells of Cinnamon. How I wish this could happen every day :) 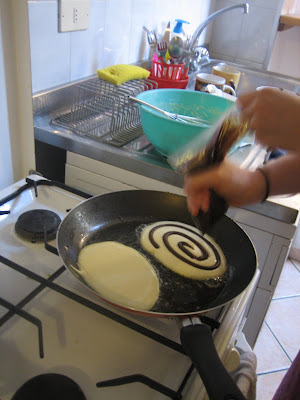 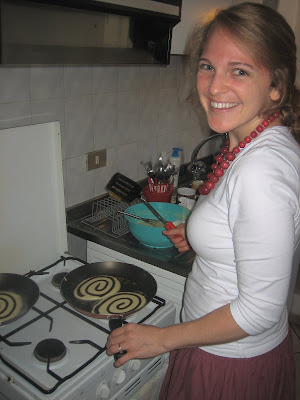 I started with baking Cinnamon rolls on friday night to feed to the missionaries and June, our Chinese friend, who joined us for General Conference. We had to be super creative to fit 5 adults in our tiny apartment but it worked out great! And Taryn had a great time with our guests who helped to entertain her for the first two hours.
Then on Sunday morning I made Cinnamon Swirl pancakes for a wonderful brunch we had at the Anderson's. When Paige sent me the link to a suggested recipe, I was so happy. I had "pinned" this recipe forever ago and have wanted to try it ever since. Now that I've made them, I told Tyson that I will probably never make regular pancakes ever again. These were so incredible- especially with my buttermilk syrup recipe. Our apartment smelled like a cinnamon all weekend long- so great!
We ate a lot of great food this weekend and enjoyed Conference so much. We also visited the Museum of the History of Bologna. I love seeing old paintings depicting the streets I walk everyday. It was a wonderful exhibit and we can't wait to go back with Tyson's sister, Janette & her husband Ken who are coming in about a week! We are so excited!

Tyson took a final today which means he is already done with one of his classes. I can't believe we have actually hit this point in time, where our days are numbered, we have our flights back home, and we are making the last of our "To- Do" lists before our time runs out.
Posted by Brianna Smith at 1:09 AM