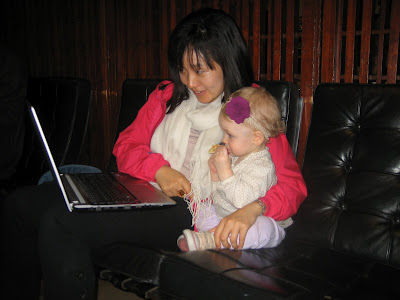 Taryn spends a lot of time at the SAIS Bologna campus. Basically the youngest SAIS student ever :) She mingles with students in Giulio's Bar as she moves the chairs all around- her favorite past time. Taryn loves to climb up all the flights of stairs, with Daddy closely behind and she tries to play the guitar in the student lounge. She has her favorite people that she must say hi to each time she is there, and one of those is Jace. As a family, we met Jace when we first arrived in Bologna on our housing tour- 9 people in one very big Italian car- you get close fast! Jace has always been such a dear friend of Taryn's and we love her so. Just this week, Jace, from Korea, shared a fun cartoon with Taryn, which she loved!
We all feel very much apart of the tight Bologna Center group and we know that it won't be the same as we move back East to D.C. where there will be more students, more internships, and more traveling distant separating students. We have loved getting to know students here, about their cultures and where they come from. We have learned a lot. And it's been fun to run into students all over the city of Bologna.
Posted by Brianna Smith at 5:19 AM