Passover and Taryn at the SAIS Bologna Center Campus part 2 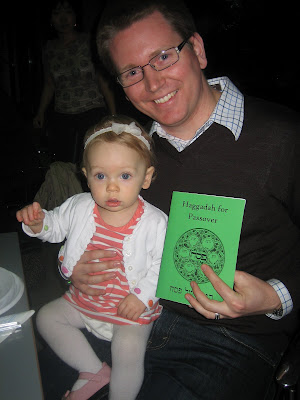 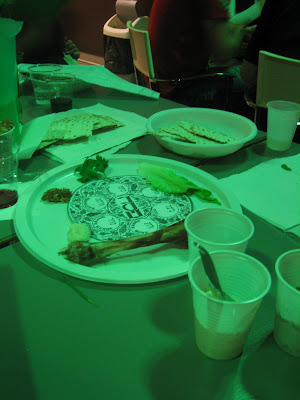 The symbolic foods of Passover in the center of each table.
We spent our Friday night at the SAIS Bologna Center celebrating Passover with some students and their family members. Many people prepared awesome Passover food and contributed time in helping set up for this dinner for over 40 people. We learned about the tradition of Passover and recited with the group, many Passover prayers. We really enjoyed being apart of this experience and expanding our knowledge of another religion. I was surprised to find out that a majority of the people who attended were not Jewish which is wonderful! So many people came to learn of the significance of this event! 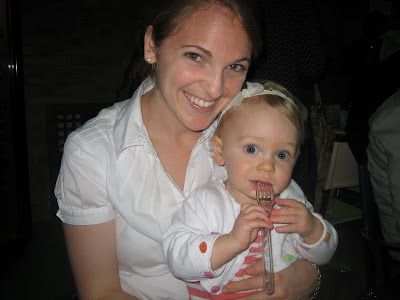 I know, bad mom letting her play with a fork! Taryn gets a lot of credit for staying up 2 1/2 hours past her bed time to be apart of the Passover dinner. She did so well and barely made a peep! She just didn't want to be held, but rather, ran around the lobby and tried to get to the food a bit early! She had one bad fall when she tried to open the auditorium doors by herself and fell back wards on the marble. 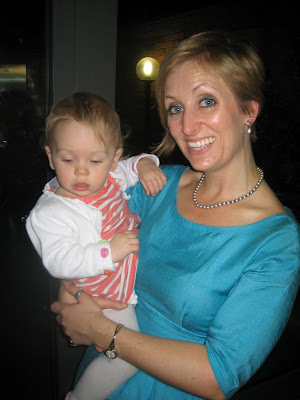 Meet Stacie- the woman who headed the whole Passover dinner, hosted her family in Bologna and gave her class debate all in the same day! She also happens to be one of Taryn's good friends. Taryn adores Stacie and her amazing jewelry collection. Stacie is a sweetheart to always let Taryn gaze at and play with her jewelry every time they see each other.

With over 40 countries represented at Tyson's school, we are constantly learning about new cultures, religions, languages, and regions of this wonderful world.
Posted by Brianna Smith at 2:39 AM