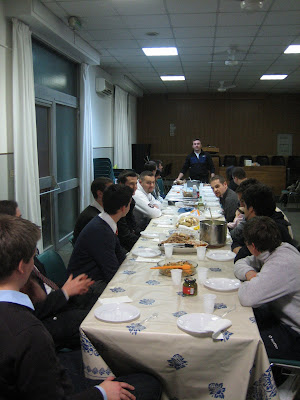 On Friday night we headed to church to celebrate Thanksgiving with the young single adults of Bologna, missionaries, the Anderson's and Julie's family. We enjoyed a wonderful turkey prepared by Paolo and stuffing from Paige and many other great American traditional eats. I was happy that the pumpkin pies made it to the church in one piece despite all of our walking, bus rides, and plastic wrap that I worried would blow with the wind and ruin the look of them!

For the thanksgiving dinners that we attended, we explained the traditions behind certain foods to those who had never celebrated or heard of Thanksgiving before. I love that we sat at huge tables at both dinners and shared food, conversation and laughs with those around us. This is a unique time of year and I loved watching the expressions on the faces of those around me. There is magic to holidays that brings people together, no matter their race, ethnicity, or religion. And being apart of what I call our "Italian Thanksgiving" (pictures above) and our "SAIS Thanksgiving" (to be posted later) where there couldn't have been more diverse groups of people, I truly appreciated the unity I can feel with those people, brought by thoughts of giving, thankful hearts, and loving concerns for those around you. 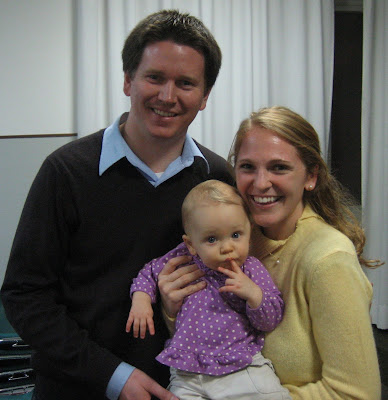 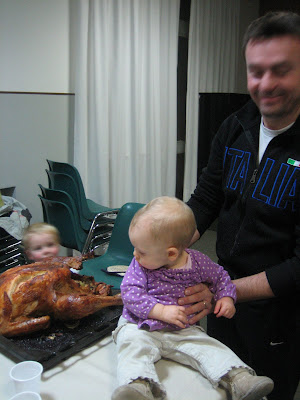 Paolo didn't want to get a picture of just himself with his great turkey so he volunteered Taryn to take the attention off! Taryn couldn't take her eyes off that bird behind her. First time seeing a Thanksgiving turkey and I'm sure she thought it was going to attack her! 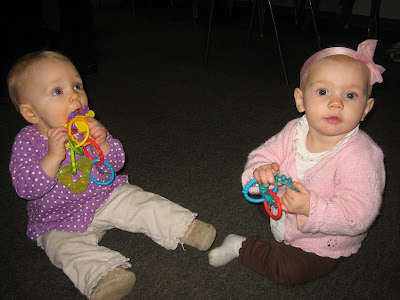 I know that by the time we leave Bologna, I will have a billion pictures of these two pretty girls playing together. And I'll love each one just like I do this one.
Posted by Brianna Smith at 1:10 PM