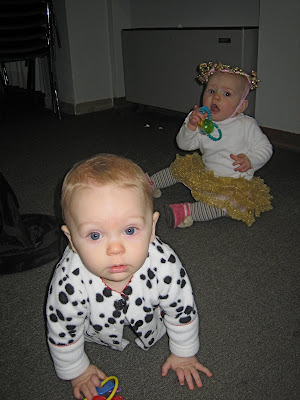 Taryn, the dalmatian and Ada the princess

Taryn and I went to a kid's Halloween party for our Church and we improvised a Halloween "costume" for her. I feel kinda bad that her first halloween was blah as far as costumes go but it's not because we lack creativity. Tyson and I actually have a handful of family themed costumes that we are excited to try in the next couple of years. For this party, I was more concerned with baking the sugar cookies for the kids to decorate than thinking up costumes. 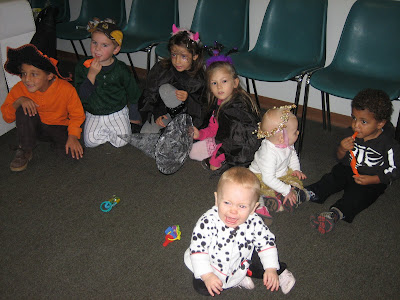 Can you see the two toys I tried to use to distract Taryn with? It never works- a baby always knows. It's almost like the classic baby and Santa Claus picture- sans Santa Claus

Taryn decided that she wasn't having fun with all the kiddos and preferred to play with a plastic cup far away from the boys running circles around her and blowing noise makers. 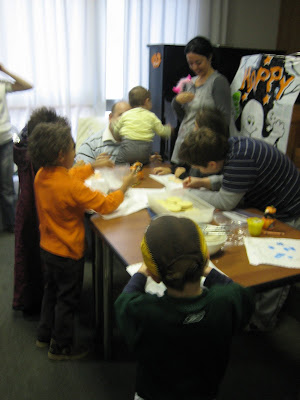 Sprinkles and food coloring and almost unheard of and very hard to find (as are cookie cutters!) so I went with a basic circle cookie cut and Julie made a basic frosting and tried to color it with cherry syrup. It worked out pretty well and I guess it's a good thing that frosting cookies isn't typical for Italians so these kids didn't know the difference! 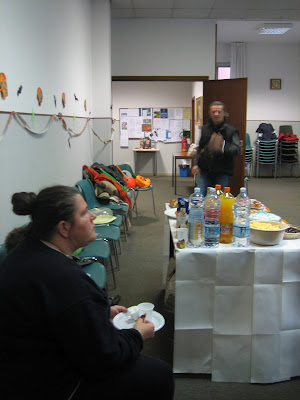 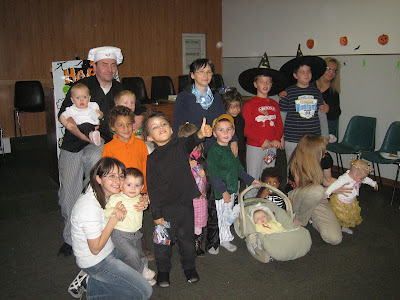 I was able to snap this picture before Taryn realized I was holding her anymore. It only took about 3 seconds for her to start crying after spotting me behind the camera. (Taryn is being held by the chef on the far left)

Tyson requested that we watch a scary movie together for Halloween. I don't do scary movies. I have nightmares and get creeped out for weeks after. But we watched one because it's halloween- you just have too! We watched the Haunting and I've heard the original is by far the scariest movie ever made because it just leaves everything up to your imagination. Glad I didn't watch that one!
Posted by Brianna Smith at 5:17 AM