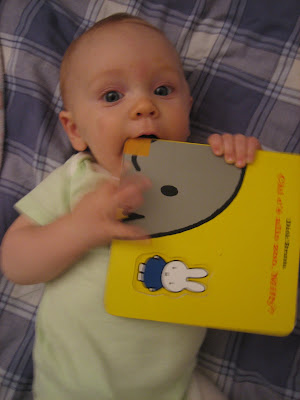 I was playing with Taryn yesterday and I saw teeth coming in!!! I was shocked and had to look over and over again to make sure that I wasn't just seeing things! This girl has two TOP teeth coming in! Since birth, Taryn has showed us that she doesn't really like to do the norm and this goes for teething too. For example:
Most parents find out their baby's gender during a 20 weeks ultrasound and then have 21ish weeks to prepare for that gender to be welcomed. Taryn decided to "hide" her real gender and surprise us at birth by being a GIRL!
Most babies have their two BOTTOM teeth come in first so while Tyson and I have been checking every once in awhile for these said teeth, Taryn decides she is going to throw yet another twist in the game and make her TOP two teeth come in! We hadn't even bothered to look at her top gums!
I would have felt horrible with her teeth coming in unknown to us because she would have done it without medicine to help with the pain but luckily Taryn had a bad cold before so during the initial breakthrough she was medicated and that makes me feel better about her pain factor.
It's true what my friend Paige said, Taryn no longer seems like my little baby girl anymore. She is more like a toddler every day and I have mixed emotions about it. I love that she is growing and developing because that's just what she should be doing. It's just gone by so fast for me!
Posted by Brianna Smith at 11:19 AM