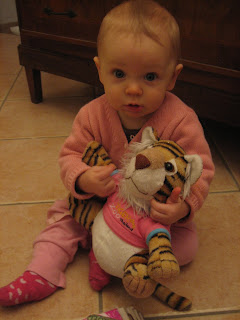 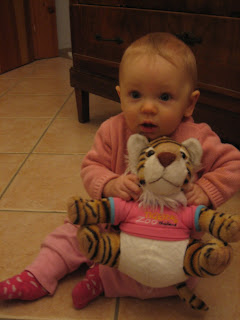 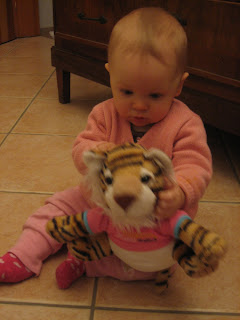 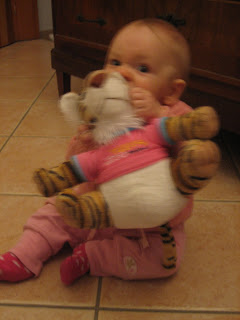 The photo shoot was about to start so I could document her 9th month and Taryn grabbed her favorite stuffed animal- her Thailand Tiger. Grandpa Smith made sure that when we left the Tiger Zoo in Thailand, Taryn had a stuffed tiger in hand. And she LOVES it! So I thought it would be alright for the tiger to join in on the photo shoot.

I don't know what it was about these past two weeks but Taryn has truly grown in so many ways! She talks a lot more, almost singing like, when she plays with her toys and moves from room to room. She smiles a lot at strangers (it used to take some coaxing- she used to just stare) And still waves at them as well.

She loves playing with Tyson and me and waits for us to come and tickle her while she is lying on the bed. She's mastered Peek-A-Boo or Coo-Coo and spent 10 minutes with the kitchen towel tonight figuring out different ways to do so (video to be posted soon!)

Taryn lost her balance yesterday at got her first fat lip due to her new top teeth- Poor girl looks like she took it hard! She started "dancing" on Sunday night. I think Tyson was singing and we noticed her "dancing" right along. It was pretty cute!

She enjoys handing things to me and then I give them back. Hopefully this will encourage sharing toys later on. She continues to walk by herself- steps here and there- I think she is beginning to warm up to the idea.

When she laughs and I can see her two teeth I can't help but think how fast she is growing up!
Posted by Brianna Smith at 5:42 AM