Just one of those weeks

This week has been a rough ride for all of us. I bet I can count how many hours of sleep we all got on two hands- for the whole week. Taryn has been sick and is now a lot worse than before after this week of sleep deprivation. Now she can't breathe through her nose very well because of all the mucus which makes feeding and sleeping a challenge. I broke down- emotionally and physically exhausted- this week. I worried about Taryn not getting the sleep she desperately needs, Tyson not getting enough sleep to function for all his hard classes, and my overall ability to function. In high school and college I used to pride myself on how well I could function off of very little sleep. The tables have turned and I can no longer jump and jive with 2 hours of sleep or less.

I am trying to focus on the good parts of this week and I would love to share them because they have touched me so dearly.

*After one of many rough nights of Taryn not sleeping, I was preparing breakfast and Tyson gave me a long hug and said, "I'm sorry." (for the long sleepless night I spent with Taryn) I needed that hug so badly and I didn't even know it. But Tyson did.

*I received emails from those I love with the ending remarks of "You're a good mom." I burst into tears after reading those words. After feeling so horrible because I didn't know how to comfort my own daughter and make her better, those words gave me hope.

*My amazing neighbor offered to watch Taryn so I could sleep. I ended up not taking her up on it because Taryn took a nap around that same time and so did I. But the offer was there and that made me grateful.

*We had planned a trip to Ravenna this weekend but after another night of no sleep we had to put Taryn's health and sleep first and cancel our trip. We knew it was more important for Taryn to get in good naps than it was for us to see a city that will be there- just the same- another weekend. And we both felt good about our decision.

*I was walking home from school with Taryn and spotted these Halloween cookies in the window of a Pastry shop. I bought some for Tyson and I to share. I thought it was silly how seeing something like this could make me happy- almost giddy- but then I realized it was because they reminded me of home. 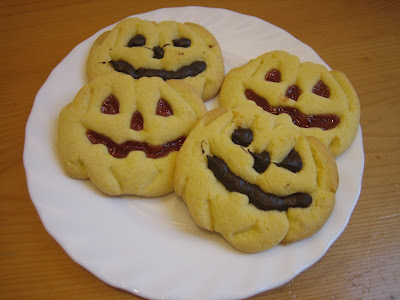 * Taryn amazes me with her new talents and I love being overjoyed with her developments. On Monday she learned how to clap (video posted yesterday). She can play peek-a boo by popping into view after hiding by our bed (or Cu-cu as they say in Italy). Taryn is becoming better at standing by herself when she wants to and walking better when I'm only holding one of her hands.

* Being up at 4am with Taryn meant that I was able to Skype with my oldest sister and her family for the first time since moving to Italy. It brought so much joy to my heart to see their faces and to talk with them even if it was only for a few short minutes (bummer that my camera wasn't working and they couldn't see me!)

I hope I can walk away from this week with more knowledge of how to be a mom, what to do next time, and how to remain patient. We may have just found the cure to her sleeping problem which is great but we will still be fighting her cold for a little bit.
Posted by Brianna Smith at 5:26 AM