Catching up! Moments we've loved from the past few months 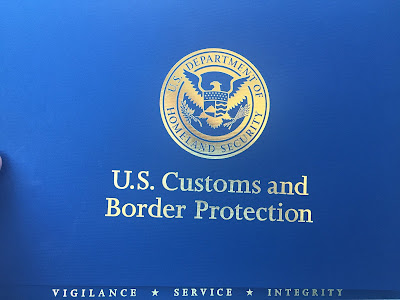 After passing his HUGE test, it took awhile to finally get his official license but it's here and we are so proud! 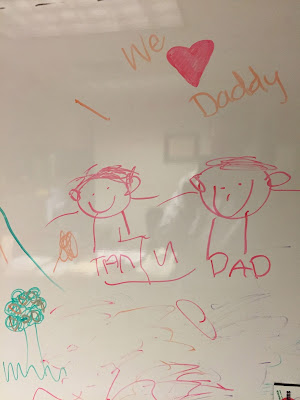 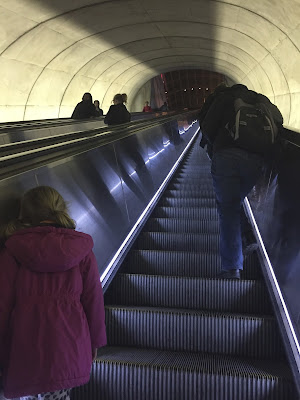 We went to Tyson's work to see his new office. Tyson gave the girls white board markers and they had so much fun drawing pictures for Daddy. We got pizza after and rode the longest escalator I've ever seen at Dupont Circle. It's not the first time I've photographed our ride up/down but man, it still gives me the chills! Taryn is on the left and I have no idea who's booty that is. 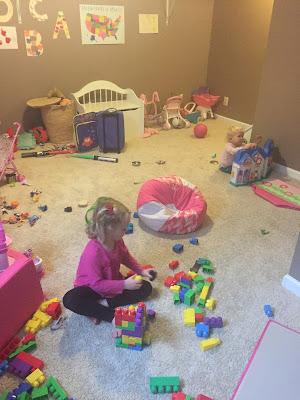 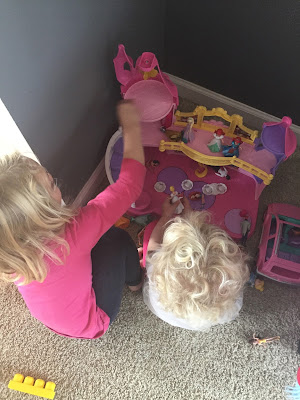 Every day scenes. Toys everyone and happy girls. I love these moments of peace because you know it won't be long until someone has a toy that someone else wants, tears or screams follow etc… But I really love these golden moments! 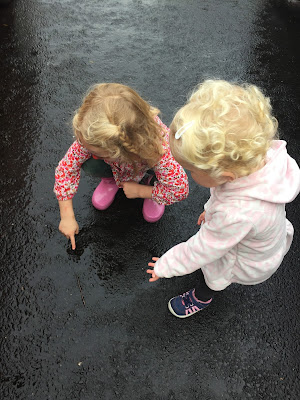 All their attention went to a worm trying to wiggle off the pavement after a rainstorm. 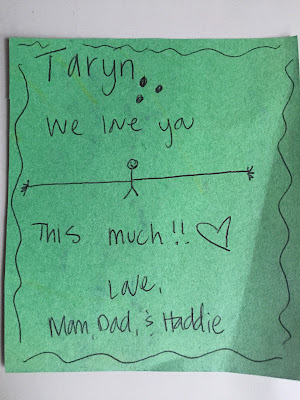 Taryn's preschool takes the notes parents write to their children and they help the children read them, then they are posted on the wall. Taryn LOVES these littles notes. She will "secretly" check her lunch before leaving to make sure I've put a note inside. It's the cutest! 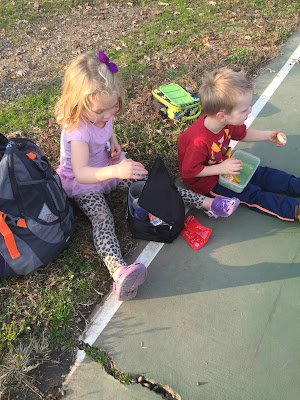 Taryn and Logan play hard together and get the biggest appetite from it. Notice the hole in Taryn's leggings. I cannot keep those holes from coming! It's so crazy. She just loves to move every part of her body and run/skid/climb with her knees. I believe this was the 1st or 2nd time she wore those leggings. I figured out that I can sew them up once but once they are torn again, there's no repairing them. It's a good thing I only buy them when they are under $5 but still….I'm looking into heart shaped "knee pads" to sew on her pants because jeans are a no go for Taryn who is all about comfort. She will be that high school/college girl who only wears athletic clothing :) 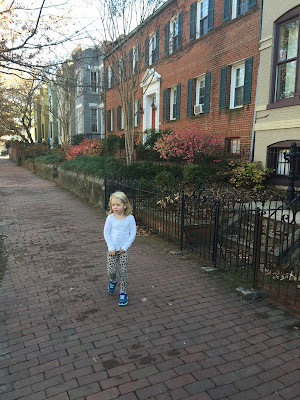 We went to Eastern Market with our friends, the Glenn's before Christmas when we were looking for the cutest finger puppets. That area of DC is beautiful and it's always fun to visit. 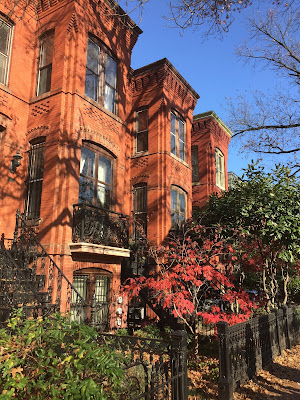 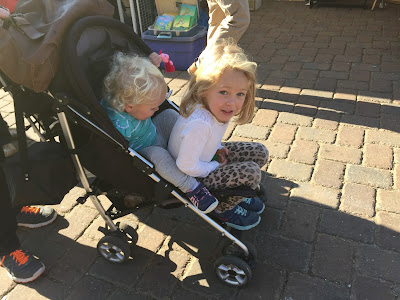 When you get tired of walking and your little sister is willing to share the stroller. These two get pretty creative. 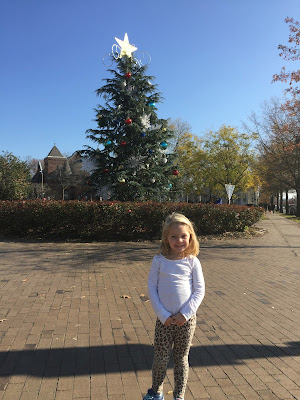 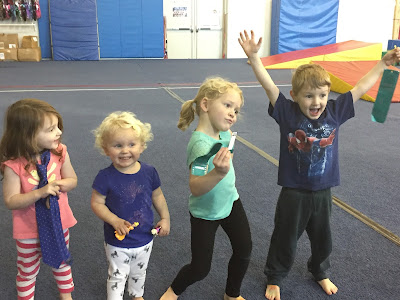 I'm posting this picture of Gymnastics "graduation" just in time for a new session to start up. But this last session was awesome because we got to do it with friends! Taryn & Ethan participated in gymnastics while Haddie & Olivia ate fruit snacks, played with princess dolls, and cheered on their siblings. It was a blast! We've taken class with only one other friend before (The Graham's) and each time has been so great. I only wish schedules would align so we could do this every time! 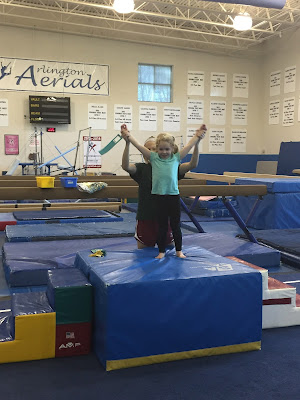 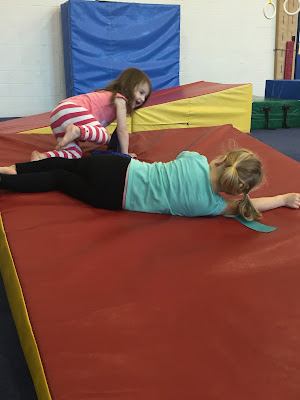 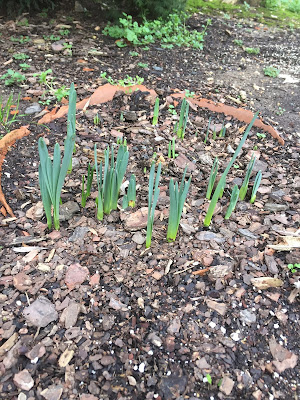 The El Nino weather has been really nice- a warm December (50 degrees or higher) is what I'm used to! But what made me sad is that our Spring flowers got all confused and started blooming. Some cherry blossoms were blooming in DC too so I have no idea what our Spring will look like this year. 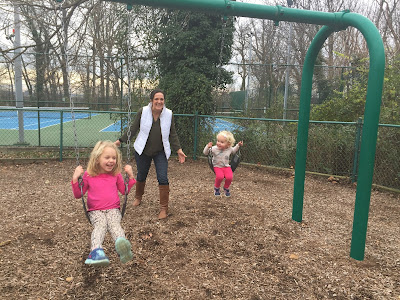 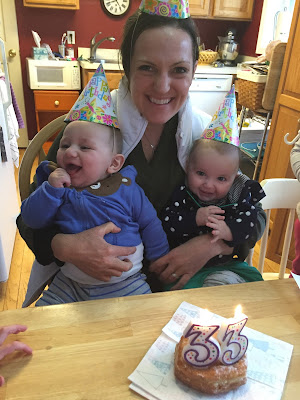 We've celebrated lots of birthdays lately of friends and Aunt Brittany's! She met us at the park and we played for a bit and then I grabbed Birthday donuts. Brittany had never tried a Conut before (originally from Domique Ansel's Bakery in New York) but our local grocery store does a great knock off (well…I've haven't had the real thing yet but it tastes so good!) Those cute babies were happy to celebrate their mama with us. 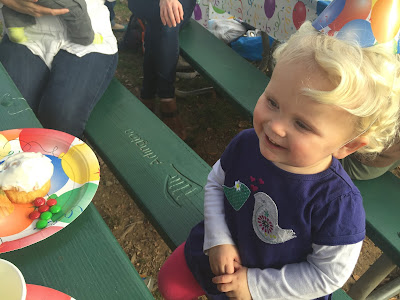 At a friends birthday party, Haddie is happy to sit and eat her little cupcake or rather, lick off the frosting and then declare herself, "All done, mama." 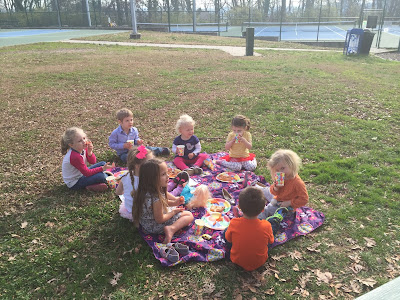 How cute is this bunch of kiddos at the park for a birthday! 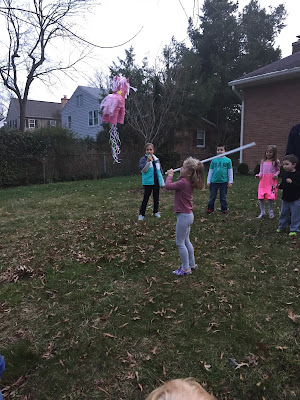 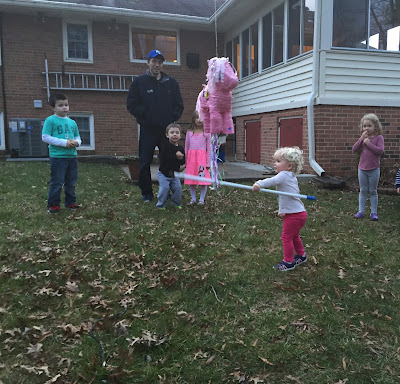 Piñatas rock. Taryn loves them and has requested a pink unicorn piñata for her 5th birthday in a few weeks. Our girls were happy to take their swings at the little pony. We're excited to celebrate Taryn's birthday soon.