Rehoboth Beach, DE. Our Summer Adventure to the Beach! 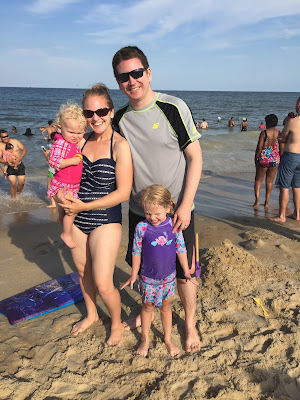 We decided with a bunch of our friends that a few weekends ago would be the best time to head out to the beach. We couldn't have planned a better weekend. 2 weeks before in the beginning of August, we had decided this is what we wanted to do and we kept our fingers crossed that all would work out. Just  days before our Saturday trip, the news reported that this was going to be a fantastic weekend weather wise and that everyone should head to the beach! I felt like screaming, "SHHH!!! Don't plant that idea! We don't want too many people there with us!"

Planning is what Tyson and I do best.
We like schedules, advanced notice etc….though we have been known to go with the flow too ;) So we planned to leave our home at 5:15am so we could make it to the beach before the crowds. We packed our lunches and all our supplies the night before. I didn't sleep well and Tyson later said it was because I was so excited! We woke up the girls the next morning thinking they would fall asleep in the car but they were too excited too! So though they were a little out of it for a first hour or so, they were happy on our little road trip! We made it to the beach around 8:30am (making one 20 minute stop)  and it was beautiful!! I love the beach in the early morning. On the recommendation of my old boss, we got an all day resident parking pass on 30 Lake Ave ( I write this to remember for next year) and that gave us a head start in the day. BEST DECISION EVER. Not only did we save money but we always saved a bunch of time. While our friends had to keep an eye on their watches to know when they had to feed the meter or re-park their car (what a headache!) we were able to sit back and relax knowing that we had a fantastic parking spot right off the beach and we were good all day long.

Once everyone in our family changed into their swim suits and was lathered up with the first round of sunscreen, we headed to the beach with our packed lunches and lots of sand toys. It was so relaxing to be there with friends and see Taryn take to the ocean water so quickly. It helped that the water was a great temperature!  The last time she was in the ocean (that I can remember) was when she was around Hadleigh's age (about 18 months) and we had just returned from living in Italy. That seems like forever ago! Hadleigh took some time to warm up to the idea and even then, we couldn't put her down. But at least she let us take her in the water and get wet! Taryn loved floating out beyond the break with Tyson and then with me. Hadleigh liked the sand better!

We took a break for lunch and redid our sunscreen. At this point, we could see Hadleigh was ready for a nap and luckily for us, she easily fell asleep on our beach towels. Another smart decision was renting a beach umbrella for the day for $15. *At the beginning of next summer, I will now know that we will have a need for a beach umbrella and buy one for the same price as renting one at the beach.*
We were so happy to have shade to take breaks from the sun. I'm sure we would have fried if we hadn't.
While Hadleigh napped and I rested next to her and visited with friends, Tyson played "shark" with Taryn and her friends. They played for a good hour! Tyson would get in the water and let the waves take him in where the kids were standing, waiting for him. They squealed and laughed as they ran away from Tyson each time. He is the best Dad! 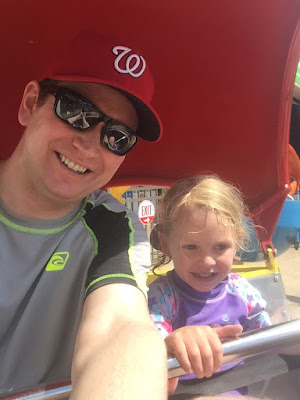 After Hadleigh woke up and Taryn took a bathroom break, we decided to explore the boardwalk. We let the girls pick one treat each and they both chose cotton candy (bleh!) You can kinda see Taryn's blue lips and teeth above. Tyson and I chose to eat at the ice cream shop with 100 different flavors. It was good, but I am looking forward to trying the salt water taffy next year! We also told Taryn she could choose one ride at the "Fun Zone." She picked a fun one! Little helicopters that moved up and down when you moved the bar. Taryn is a dare devil for sure! She controlled the bar the whole time and mainly had it up as far as it could go. Hadleigh was scared and burrowed into my side as soon as we took off :) Then it was back to the water and sand!

East coast beaches are so different from the West Coast. At first thought those itty bitty fences on the sand were strange and the fact that there was grass growing only a few feet from our towels was weird. But we learned that those dunes help protect the beach from eroding which is pretty cool. It also creates a visual difference between the coasts which is fun, making each experience unique. 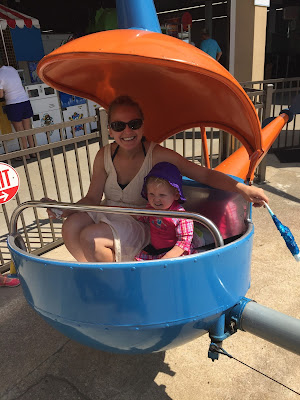 After spending all day on the beach, we decided to head out just before 5pm as we could see our girls had reached the point where if we had extended our stay even 30 minutes more, we would have faced big meltdowns. We headed to our car and covered everyone in baby powder. I had heard about how awesome it was for removing sand especially for kids. Oh man- I love that stuff! It will be a beach going essential for me form now on. We changed the girls into jammies and hit the road again.

I felt like this whole trip for our little family was perfectly timed. We got the girls in the car and we were able to stop and grab a quick bite to eat for dinner close by before they fell asleep for the entire drive. Transitioning them into their beds was a dream! The beach really wore them out and they loved their time there, as did we! We loved being able to cross off Delaware from our "States to See" list too!
I can't wait to go next year!