More on biking. Our way of getting around town. And visiting the Local Farmer's Market 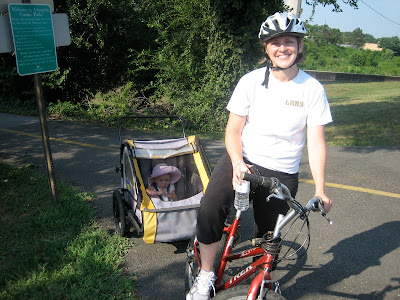 We biked a portion of the Four Mile Run Trail which is a 7 mile paved bike trail last week. The trail runs parallel to a stream where we have seen people practicing their fly-fishing. It leads right to the Giant grocery store which is perfect! I've already tested the bike trailer for normal grocery loads and it works great.
I tried a Costco run just the other day with Taryn because it's not even a mile from my home- another plus- but I don't think Taryn was to happy to share her front two seats with a big package of toilet paper :) She was fine once we got going and with some planning, big pick ups can be made on Saturdays while Tyson is here in the mornings to watch Taryn.**

Some funny comments we've heard so far as we bike:
A little girl in a jogging stroller saw Taryn and screamed, "Woah! That looks like fun!"

One lady in the Costco parking lot said, "Oh, That must be hard on your legs!"
(Actually, it's not. The trailer is a breeze to bike with and the only time I really feel a difference is when I am biking up the very few and small hills with a load of groceries. )

A hard core biker stopped by us as we waited for a light to change on the street and said, "How cool! (with the biggest smile on his face) Are you guys on your way to work? Or just out for fun?"
It was all about having fun :)
Have you ever seen the shared biking/driving lanes in VA? They are HUGE! One of the many reasons it's such a great biking community. Our trailer fits the designated area perfectly and I don't have to worry about overspilling into the car lane.
Our biking adventures will continue as we learn more about the area!

The Tuesday Farmer's Market
For dinner last night we ate Mango Peaches and a delicious Summer Carrot bread all bought from the weekly local Farmer's Market down the street from us. Tyson, knowing that he won't be able to always go with me, made a "Wish List" of what we will buy next week. I had never seen a Purple Sweet bell pepper before or the unique Celosia Flower. The tomatoes were gorgeous and the berries looked to perfect to eat. We promised to buy our bread there for our soup bread bowls once the weather gets colder- just to be able to try them! All the breads looks so good. We listened to others as they sampled the delectable creations from other purveyors to know what was good, what they keep coming back for, and the top sellers. The samples of cheeses, salsas, breads, fruits and more were so good. Too bad I forgot my camera!

**Some states require that children in a bike trailer wear helmets (like California) and some don't (like Arizona.) We have yet to find anything saying it's law in Virginia. This was the only bike ride we did (98% on trails) that Taryn did not wear a helmet. When we first tried the helmet/trailer combo, Taryn's head was forced down so her chin was touching her chest and she couldn't move her head. By the next ride we figured out that we needed to put a pillow behind her so she could move her head around and not get hurt. She's been with a helmet ever since! I feel much better having found a solution and knowing that I can bike on streets now.