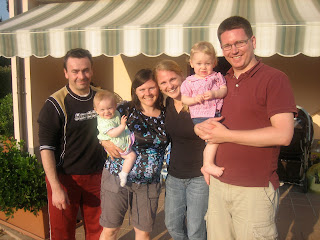 I don't know what our experience in Bologna would have been like without Julie & Paolo and their 3 beautiful kids. They moved here (for the second time) just a few months after we arrived. Julie and Paolo quickly became "Aunt" and "Uncle" to Taryn and brother & sister to Tyson and I. I cried as we hugged and said our last goodbyes at the gate that leads to their home. I knew this goodbye would be very very hard. Julie knew where to get the hard to find cooking items, where American products were sold, and could tell us the Italian word for anything. She listened as I cried on the phone to her- offering comforting words and helped me when Taryn was sick (she's a nurse and has 3 kids of experience under her belt). Julie opened her home to us nearly every Thursday for a giant play date- 3 moms and 5 kids- always a treat!!
Paolo taught me how to make Lasagna Bolognese and many other recipes (so did Julie!) and was never hesitant to offer a ride to our apartment. Paolo even took Paige and I (while Julie watched the babes) to the local inexpensive markets to teach us where we could go for cheap food, what to look for when shopping, and what the Italians eat on an every day basis. It's because of Paolo that Tyson and I have enjoyed Capricciosa Salad over and over again. I have loved getting to know their three kids (their youngest- Isabel- pictured above) and becoming an "Aunt" to them. Aaron and Jordan have the most contagious laughs and sweetest smiles. We love this family so much! 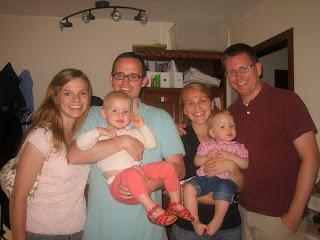 The Anderson's will catch an early flight home to Utah tomorrow. Luckily, we will be able to see them again in Washington D.C. once the semester begins. In honor of their last night in Bologna and our last time all together with our 3 families, we gathered at Julie & Paolo's for a final dinner together. And it was so delicious!
We lived just two doors down from them and it was such a blessing. Having another couple with a baby in Tyson's Grad Program here in Bologna was so great. We had many many play dates, recipe exchanges, and fun gatherings. I loved having Paige to g-chat with throughout the day about ideas or setting up play dates. Having another mom around the corner, with a baby girl the same age as Taryn was so helpful because we often went through the same phases together (feedings, teething, walking, talking, sleep patterns) so it was wonderful to be able to bounce off ideas or get suggestions from her. They opened their home so many times to us for dinners, treats, and an awesome BBQ. Taryn would light up when she saw Ada and would get very happy when I told her we were "going to see Ada." She loves her little friend so much. Discovering a new city and a new language can have lots of ups and lots of downs. Knowing that I had someone within arms reach who was in the same boat and who I could go to made it that much more doable. We're excited to see how much Ada grows over the summer and to have these girls play together again. 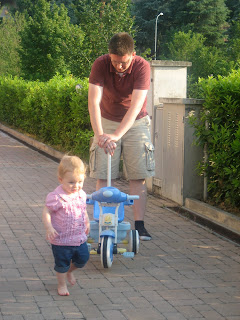 Taryn ran barefoot outside and played with a great bike (while Daddy pushed) that she has fallen in love with- Now to only find one like this back in the States! Seeing Taryn running barefoot made me so happy. It means it's summer time and she's doing just what every kid should be doing- playing outside and enjoying the weather! 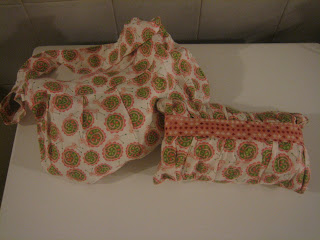 Aunt Julie made Taryn an adorable clutch bag for her birthday and then as a going away gift, made a matching purse for her. And it was stuffed with homemade goldfish crackers & cookies for the long flight ahead!!!!

Tomorrow is our last day in Italy and we plan to fill it with gelato, pizza, park time and touring the city one last time.
Ciao
Posted by Brianna Smith at 1:51 PM