Not only helping, but loving 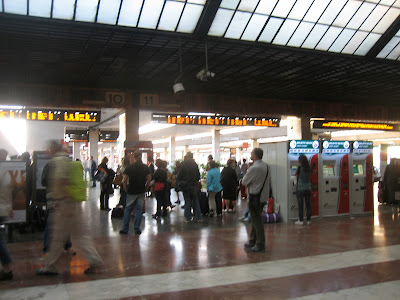 I want to be like Clementina. This is one of the stories about how she has influenced my life.
When we were returning home on Saturday night from Florence it was late and we were all very tired. We pulled up to Bologna Centrale Station just before 10pm. Taryn as anxious to get her wiggles out so I put her down to run up and down the stairs in a small pavilion. Tyson walked a few more feet to check for buses to take us home. That's when I spotted our Peruvian neighbor, Clementina. She must be about 65 years old and is the sweetest lady- always loving and providing service.  She asked what bus we were taking home and hoped on with us. She speaks Italian and Spanish so when we talk with her, Tyson speaks in Spanish, and I communicate with her in Italian. And sometimes she responds with a mix of both. On the bus we pulled out our CityPass Autobus Card- good for ten rides. We had used up 7 already so we had enough for both of us to get back home (babies are free!). But the machines weren't working and didn't accept our card. We didn't have any coins to use for the pay machine on the bus and we were growing worried and frustrated. We tried and tried to get the machines to work, but nothing happened.

Taryn was so unhappy mainly because I took her away from the fun steps at the station and it was way past her bed time- and she wouldn't let me hold her. If you've ever ridden on an Italian bus -or any bus for that matter- you know that the ride can be unpredictable especially if the driver is a bad stop and go-er. So I held onto her as she cried and cried and twisted, trying to get free. Clementina was sitting a little further back, facing us on the bus. I think she could tell that we were growing frustrated by the minute with the pass machines and becoming more exhausted with every twist and turn of Taryn. Clementina offered her bus pass to us to use and stood by us as we prepared to leave the bus at our stop. When we got off she asked us to come with her to get gelato. It was late and we were worried about Taryn so we declined. But she wouldn't take no for an answer. She told us that we could get a gelato and eat it on the walk home. She was very persistant- and maybe she is like me and knows that chocolate or sweets can cure almost anything.

So we walked into the gelato shop at 10pm and she bought our gelato. Taryn was so happy (of course!) and we got to walk back with Clementina, listening to her day and talking about ours. She told us the gelato was a "thank you" because without us she would've gotten on the wrong bus and she wouldn't have stopped by the gelato shop to get her favorite Pistachio and Chocolate.
Clementina reached out to us when she knew we were struggling. She paid for our bus rides and bought us gelato. She smiled the whole time and was so loving with Taryn. I will think back on that moment for the rest of my life think about how sweet she was to us. I want to remember that moment when I see a family that needs just a little help or a mother who needs a kind smile when I know her day has been exhausting.
We will be dropping off a little gift to Clementina as a thank you to her for her kindness that Saturday night, for all the times she has helped me carry heavy bags of groceries up the stairs, for the cake she dropped by our apartment, and for all the times she has stopped on the street to say hello and ask how I am doing with the most tender voice.

She is a wonderful example to me and I will take what she has taught me and use it every day. 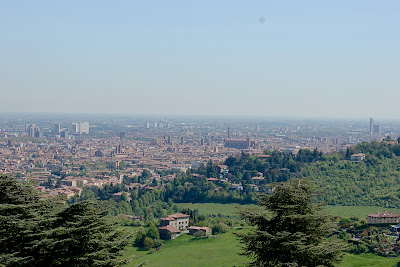 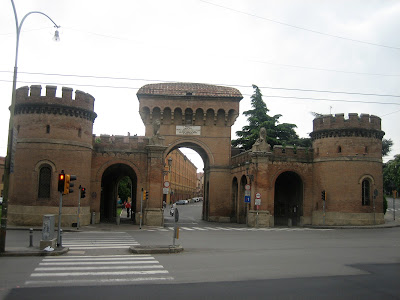 View of Bologna and Porta Saragozza

Posted by Brianna Smith at 6:20 AM