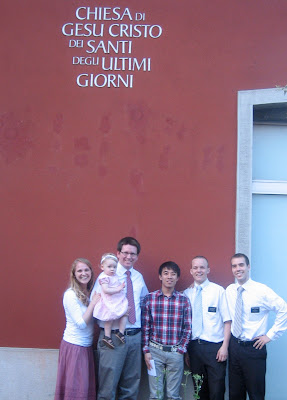 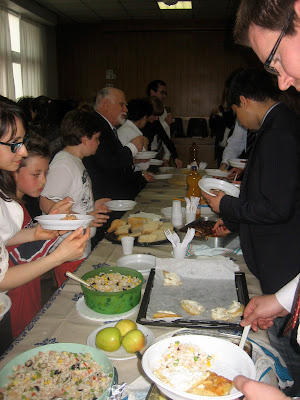 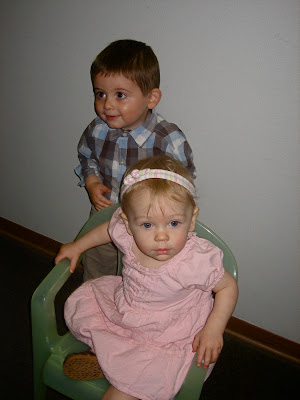 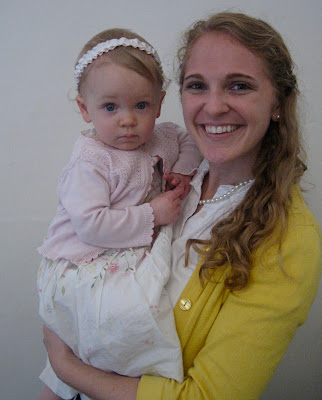 What a fun couple of days! Saturday was Jun's baptism (pronounced June)  and we were happy to be part of it. In just a few months he will be returning to China after studying at the University of Bologna.
On Sunday after church our ward had a gathering for Jun's  baptism and as a good-bye for us and the Anderson's. I love everyone in the ward and how much they are like family to us. The process of moving to Bologna would have been much more difficult without them.

Pictured above is little Joshua, whom I teach in Nursery, and Taryn. It totally looks like an awkward High School dance picture pose. I love little Joshua who's almost two years old. These two ran around following each other and laughing. When I called Taryn to come over for the picture, Joshua stood right by me and mimicked me by saying "Trn, vieni !!!"  (Italian for "Taryn, come!") and motioned with his hand for Taryn to come closer in the cutest little voice over and over again. I love that Joshua can say her name now- well, kinda :)Also, Little Jordan who's almost three  asked me when I walked into Nursery, "Dov'è  Taryn?" ( Where is Taryn?) Oh, these little boys melt my heart.

I had the opportunity to play the piano on Saturday for Jun's baptism and I was so bad. I forgot the instant red face, sweaty palms and shaky hands that come after everyone starts singing along with your playing. The "Oh no! If I make a mistake, people are actually following along with me- and they will for sure notice!" Rest assured, I made SEVERAL mistakes. So much so that I switched back and forth from one hand playing back to two hand, then back to one hand, over and over again. I was mortified. I am one who once a mistake is made, it's all down hill from there. Oh brother! It's been WAY too long since I practiced for more than 2 minutes at a family members house because Tyson and I don't own a piano. Someday we will, but until then, I'll be practicing at my parents house and my in-laws. I will get better again!
Posted by Brianna Smith at 12:00 PM