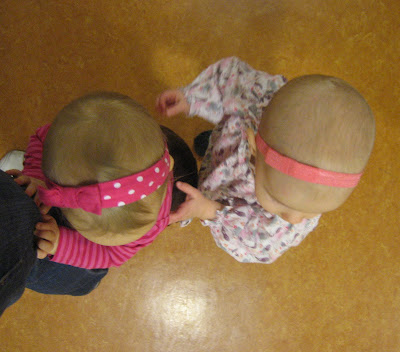 On Thursday Taryn and I met up with Tyson at school to attend a Brindisi for two very talented artists. Paige & Kirsten had dedicated many hours to this special project as they were asked to paint a mural in one of the Admin offices at Johns Hopkins University. It turned out so great and I especially love the mural because the picture it was based off of is right out my door. We live in a very beautiful and "Italian looking" neighborhood. Not all of Italy has this special charm and I love where we live so that we can walk out of front door and see such a great sight everyday. 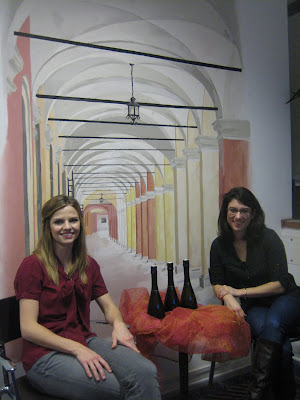 Paige & Kirsten in front of their -Porticos of Via Solferino -Mural
We were informed that their would be soda for the non-drinkers and light appetizers served. So when the toasts began, one of the members of Admin shoved two drinks into our hands. At first I thought, "Oh how great. he got us soda because we don't drink! So nice of him" Then I got the wiff of alcohol. Nope- no soda in that cup- it was Prosecco. After taking a Wines & Spirits class in Culinary School, I got very used to smelling (because I skipped out on the "sipping") various wines and alcoholic beverages. Do you want to know what? It all smells like a hospital to me. medicinal- that's all I can think of. So we quickly passed our "drinks" off to those who surrounded us and had an imaginary soda "brindisi" for the toast. Great job, Paige & Kirsten- it looks great! 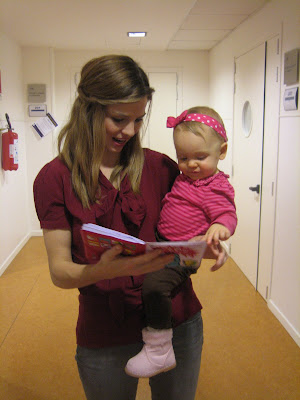 Paige reading to Taryn. Taryn was laughing and pulling funny faces.
We've learned that Taryn takes a while to warm up to people. So this picture is a moumentous one for us. She will go to Paige & Julie now for a couple of minutes without crying or reaching out for Tys or me. Taryn has to build the trust between another person before she will go to them willingly. It's taken a couple of months- almost 4- but we're getting there.
Posted by Brianna Smith at 11:42 AM