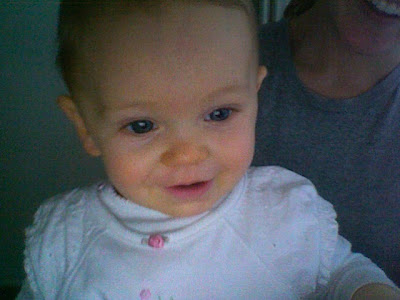 Our smiley happy girl
We've been taking it slow around here this week. I've been out of commission because I'm sick and it's actually taken me a lot longer to get rid of it than I thought. Taryn has been awesome considering the only time we've left the house since Monday was to go to the grocery store and grab some movies. It's been freezing cold this week so part of me is happy we've stayed indoors as long as we have. But tomorrow- we are getting out. Despite what the cold air may do to my cough (make it worse or make it better- we'll see).

Tyson's hitting the books hard for finals. He has 3 finals done -Yeah!- with two more left. One tomorrow and then his last one will be Thursday.

The true school break (aka- not like Christmas break because the semester hadn't ended) will be spent sight seeing, traveling, and figuring out our summer in the U.S.A. And of course celebrating the end of his first semester of Grad school. We try to find as many things as we can to celebrate. We think life is more fun when you celebrate even the small things.

Some pictures from our slow week. 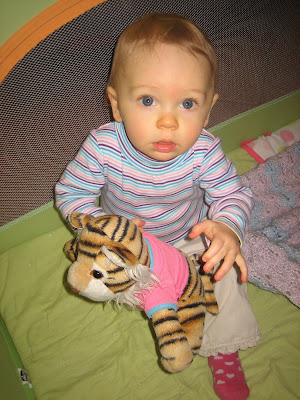 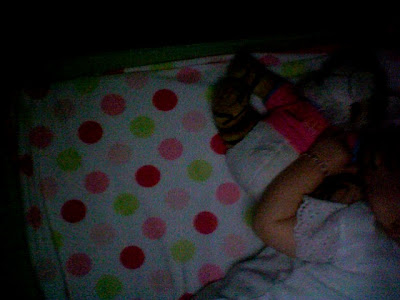 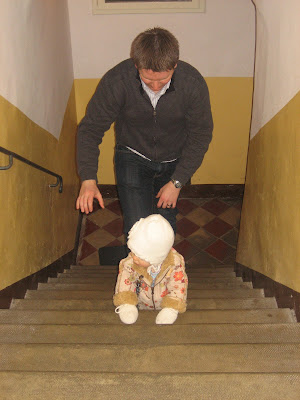 Learning to walk up stairs.
She's in gloves and a jacket because those are cement stairs (FREEZING COLD) and our entry way into the building is ALWAYS colder than it really is outside. Our stairs are super steep. I never realized until a couple of friends mentioned it on their way out and then again when we were teaching Taryn. She's got it down- and she thinks it's pretty fun too. 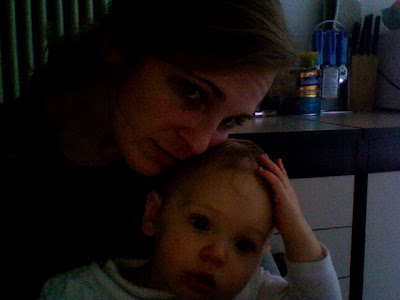 Taryn has bonked her head so many times this week.
She's running now so with tile floor and socks- it's never a good combo. Any suggestions for keeping her feet warm and keeping her head from serious bonks?
(Like the flip backwards and smack your head kind) 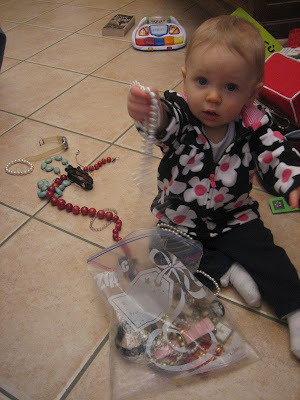 Mommy's fun jewelry bag. This has provided HOURS of entertainment. Necklace in the bag, on Taryn, behind her back, and back in the bag. Repeat 5,000 times. Tyson, Taryn and I were all on the bed watching Taryn play with the necklaces and bracelets. She started handing each one to Tyson and then when she ran out of jewelry, she looked all around her for another piece but because she couldn't find anything, she pretended to pick up something and hand "it" to Tyson. She did this a few more times until we were laughing so hard she got distracted. Funny girl and her imagination!
She does the same thing while I'm feeding her in her high chair. She'll pick something up (when there's nothing on her tray) and give it to me to eat- making the nom nom nom sound. Imaginary food tastes best- did you know that? She cracks me up!
Posted by Brianna Smith at 1:45 AM