Taking it easy on a Friday

Friday we were all able to "sleep in" after convincing Taryn that 5:00am was not time to "go outside." As Tyson was leaving for work, Taryn woke up.
Lil' T : "Mommy, pancakes?"
B: "Sure! I can make you pancakes!"
Big T : " Man! I want pancakes too!!" as he walked out the door for work. Poor daddy...


So we stayed in our pajamas until 11am, eating pancakes and trying to decide to continue/pick up potty training. After experimenting on Thursday (6 accidents before noon) I was thinking we needed a new strategy. I know it can take a few days to catch on and I'm willing to put forth the effort but when some unexpected events happened this weekend, we decided that it would probably be best to start another time (in the very very very near future.) Taryn still enthusiastically talks about going potty in the toilet so we are still encouraging but I also have to be smart about timing, and this weekend turned out to be bad timing (more for us than Taryn)

So, on went the diaper and we were off to the park. We met up with our friend Lynne and her cute 1 year old son Logan. I was amazed at how fast time flew by as our kids played in the sand and with shovels and wandered around the park as us girls talked and talked. I felt like we got in a great amount of Vitamin D as the sun shone so brightly I wanted to grab a pair of glasses and throw a hat on Taryn. It was wonderful. But boy how things changed quickly. By 5pm the clouds had rolled in making way for the snow to come today. We were happy to get our park time in during the most beautiful part of the day. 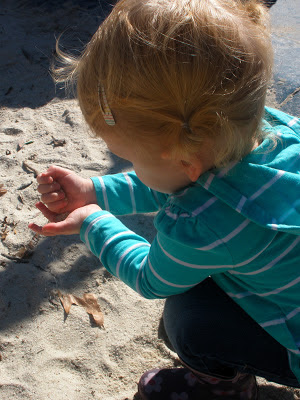 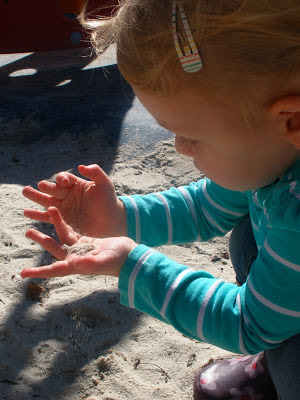 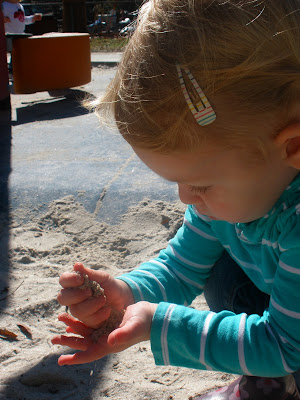 Later that day Taryn also got to spend time with two cuties while I chatted with their moms
(visiting teaching). 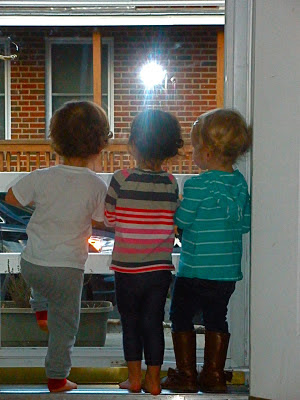 This picture is the cutest.
(all of them were looking at a "bug" outside the glass door.)
All about the same age, these 3 played together so well and were all great at sharing. I was surprised as I watched Taryn talk to her friend saying,  "share toy?"  "share din saur?" (dinosuar) etc... she was very patient, didn't grab, and even though she looked over at me in frustration, she tried to resolve it herself (this is big progress!)
These little ones share!
It just clicks in their heads one day that sharing is great and because they are all about the same age, they all know about it.
My little girl is growing up and learning so fast, I can't stand it.