Sharing a little bit of the holidays from Italy. What we've learned from living, studying, and visiting Italy 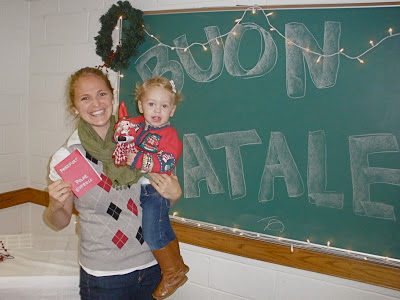 As a part of a "Polar Express" night, we were one of the countries that children visited on their way "around the world." Tys and I had both signed up for Italy so we gathered our Italian Christmas items we have collected over the past few years with my study abroad and us living their last year.

We learned so much about different holiday traditions last year in Bologna and it was so fun to take that knowledge and share it with tons of little children. Each child had a special Polar Express passport and with each country they visited (Guatemala, Sweden, Germany/Austria, France, Italy, Mexico, and more) they got their passport stamped. Tyson made sure each child tried to say, "Buon Natale!" or "Merry Christmas" in Italian before getting their stamps. I was super impressed with the children and how they paid attention to every word and attempted to say (some did so well!) "Buon Natale!"


We talked about La Befana, panettone bread(we actually found a store that sold some!),
the origin of the Nativity and some other christmas traditions.

This was the best Christmas Party we have ever been too. I wish we could have taken pictures of the entire building but we were so busy! Taryn kept hearing the Conductor (Think Tom Hanks from the Polar Express movie- spot on) blow his train whistle. She was convinced there was a train down the hall way and got so excited/confused. She finally got to see the train when they started the movie for the children later on. We loved the "hot chocoLate!" bar - so delicious and well displayed and the yummy cookie exchange. Held on December 1st, it was the best way to start off the month of Holiday celebration.