The Nutcracker Puppet Show and the Performaning Arts for littles

Taryn and I went to a Nutcracker Puppet show for ages 0-3 put on by the Puppet Co. in Glen Echo Park, Maryland. It was so perfect for her. You could also tell from all the little ones that it was a hit and the fact that the shows sell out FAST!
Taryn hugged & kissed me throughout the entire show, a true sign to me that she was so happy I took her there. She could hardly sit on the carpet for 3 seconds at a time because she was too excited to see the next puppet and what they were doing! It made me so happy to see her so happy. It was one of those perfect moments where our smiles couldn't be bigger.
We watched and laughed and loved how the puppeteer brought each puppet to life. It was interesting how he broke down the play into simple puppets and little dances. It made me want to see the real Nutcracker ballet someday. (Maybe when we can afford the $45-$110 a piece tickets here in D.C.! WOW!) 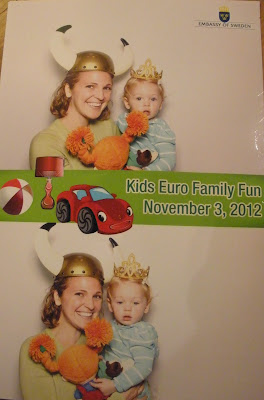 After coming home I remembered how we had taken Taryn to two art performances in November that I just never blogged about. As a part of the KidsEuroFestival  there were many productions put on by different countries and hosted by various embassies. Both were fun and different and Taryn loved them. We saw "Max: The Play about the Ball, the car, and the Lamp" in the Sweden Embassy. Even though Taryn tried multiple times to play with the balls in the performance, it was still a good experience to attend. They had many crafts and games for each child to do, and a photo booth for children and parents. The Sweden Embassy was amazing and had a fantastic view of the Potomac. They had ipads set up with different apps used in Sweden by school children, a book and play center etc... I could see myself and Taryn going back for more visits!

The second performance we saw was in the Kennedy Center called "Wind". We were lucky enough to go on a night that worked with Tyson's schedule! We met him by the metro in D.C. and walked to the Kennedy Center (with expert navigation from the Anderson's!) The company performing was from Bologna and when they did speak, it was in Italian. It was a great night out as a little family and a fun experience to see a play just for Taryn in the famous Kennedy Center.
Posted by Unknown at 7:45 AM