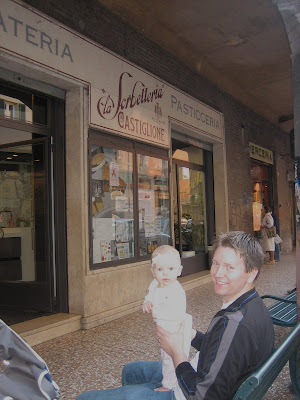 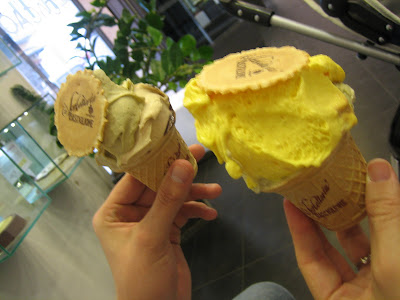 La Sorbetteria was listed to the Johns Hopkins "Guide to Bologna" book as one of the best Gelato places in Bologna. We have tried to cross off each one on that list since moving here in August plus a few that we have found on our own (like Chocolate). We have enjoyed a lot of gelato from a lot of different places, but La Sorbetteria has been are favorite for the all time classic flavors of Pistachio, Chocolate, and Nocciola. Hands down they have the best cones and wafer cookies I have ever tasted. When Taryn tried a bit of the Chocolate, she pulled a funny face and I don't blame her. It's probably the richest, darkest chocolate that I have ever had...oh it tasted so good. For all the choco-holics out there (like me) this would be your heaven.

It's said that in the summer time, Italians eat gelato and in the winter time when the gelato stores close, everyone debates which gelato store has the best chocolate gelato. We've heard, and it's evident by how many people we see there daily, (we live only a short walk away) that La Sorbetteria has been named as the "best" by many!

We will still continue to try different places, but La Sorbetteria will hold a special place in our hearts. 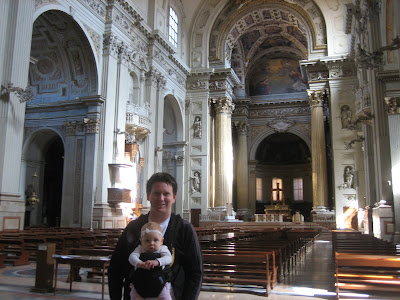 This adventure took place on one of our last "free" Saturdays we will have before school starts. So we made sure to throw in a little sight seeing of another beautiful church. Some may ask, "Don't you get tired of seeing so many?" The answer is always, "No!" Each one is so different and each have their own specific charm. We are trying to see as many as possible while we are here! This beautiful church is located in near the Piazza Maggorie, La Chiesa di S. Pietro è Cattedrale Metropolitana.
Posted by Brianna Smith at 2:51 AM