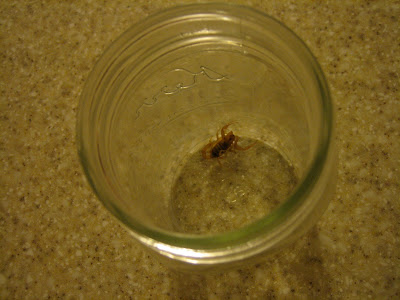 Tyson killed a scorpion outside while we were working and I think it scared him. He said it exploded when we killed it. Gross. He wanted to check the yard for more scorpions so that we would know if Taryn could play back there.

So he went scorpion hunting.

You have to wait until it's dark to go scorpion hunting because you use a black light flashlight to see the glowing bodies of the scorpions. Grossed out yet?

Tyson took two of his nephews out with him and they were all excited to find out what lay in Grandma and Grandpa's backyard. I could hear the boys from inside the house as they yelled with excitement  when they found one, two, three scorpions outside. But they weren't trying to kill them. They wanted to catch them. One of my nephews brought a mason jar to collect the little creepers but they were only successful in catching 1- after accidentally taking off it's stinger.

Fortunately we live on the same cul-de-sac as our exterminator and he comes every month to spray the home, which is typical in Arizona. They can be alive outside - fine by me. I'm just glad we don't have to worry about them being alive inside the house. I'm happy to have an exterminator who keeps those creepers outside of the home! 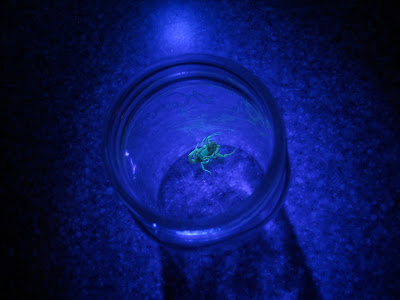 Tyson says that the scorpions stick out like a sore thumb once you shine the black light on them.
My old roommates who were born and raised in Arizona used to tell me about scorpion hunting and how they would do it for fun. I didn't really understand what was "Fun" about it until I could hear the boys outside and then listening to their stories of how the other 2 scorpions got away. As long as they wear closed toed shoes and long pants, I'm fine with Scorpion Hunting fun!