I love Taryn and Haddie so much! They bring so much life to our lives. I really love to take a bunch of pictures of them because I want to remember these moments in life! I'm always having to clear my phone and back up my photos!

I found a stack of papers with quotes from the girls (some probably from months back!) and I wanted to share some on this blog along with their funny little pictures!

Taryn loves to play pet shop. "Who wants a pet!?" She screams to me and Haddie or friends.
Then she goes into detail about what makes the pet we chose a great one.
She will also tell us their names.
Taryn:" His name is Faster, Lemo, Goloboahkah, Cheater (Cheatah), and Fancy."

Sometimes Taryn will tell me stories about her animals adventures.
"A little baby turtle climbed up the mountains and then I caught him so he didn't die."

Last summer I told her to jump in the pool. Taryn responded, "It's going to hurt my bones!" 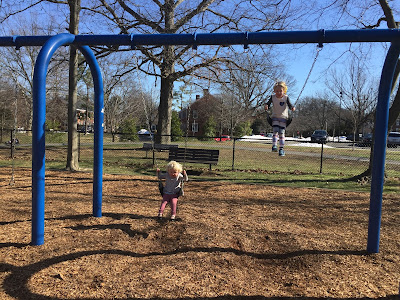 I love the peaceful times of when these two play together. Honestly it's mostly a battle of learning how to share, talk nicely, and learning to play together, but there are moments where my heart could just burst when they play nicely. Like right at this moment, the girls are playing map believe, asking each other questions and being so sweet to each other. I LOVE IT!

An early memory I have of them two together was from awhile back in the early morning when they seemed to be speaking their own language, jabbering back and forth, gathering up their toys and playing so nicely together. 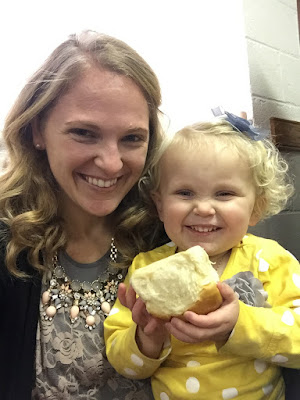 Us two at Institute (which is so great!) on Thursday mornings after we drop Taryn off at preschool. 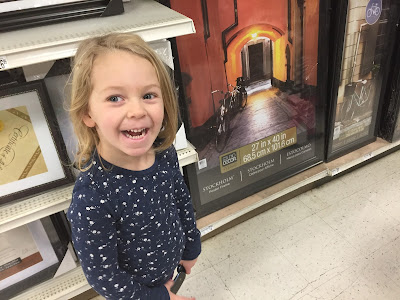 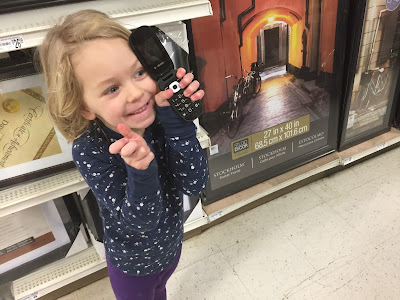 Taryn loves to "text" her friends on Tyson's old phone. She also loves to pretend to FaceTime with cousins and Grandparents. She brought her phone into the store with us one day and pretended to take picture of everything.

Taryn really wanted some toys I showed her online one day. I said we wouldn't be able to get them yet because it would take awhile to get them by mail if we ordered them. Taryn: "We can put the money in the computer, then the toy will come out!" (one day Taryn…one day!) 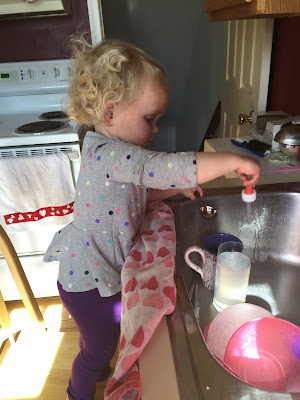 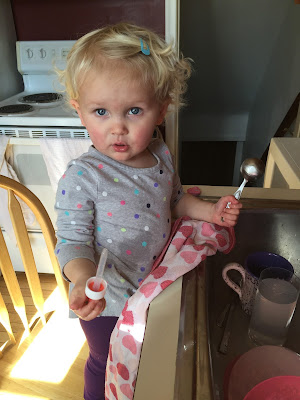 Haddie loves to play with water. I gave her an eye dropper and a tablespoon and she was happy for 30 minutes ! 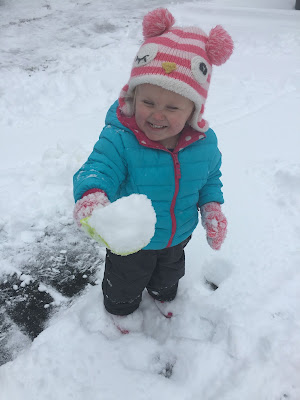 One of the last snow falls of this winter! Haddie loves to shovel that snow but hates her gloves. 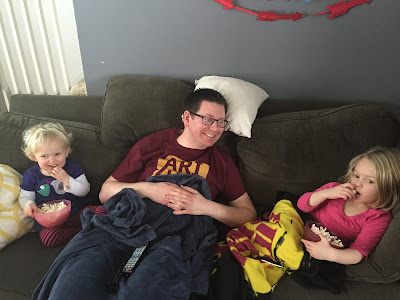 Tyson and the girls were ready for our family movie night with popcorn and blankets.

"Mom, why are you making me go to sleep?" said Taryn one night at bed time. 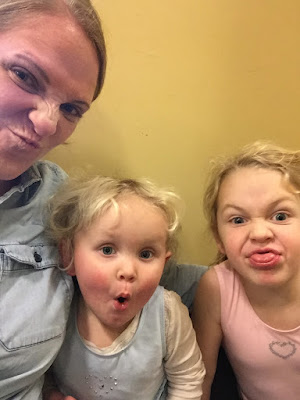 Taryn wants to know every dogs name.
She loves collecting rocks so we've started a few rock collections outside of the homes we've lived in over the past years. It starts growing with sticks every once and awhile too. It's not uncommon for me to find a rock in my purse after being at the park. 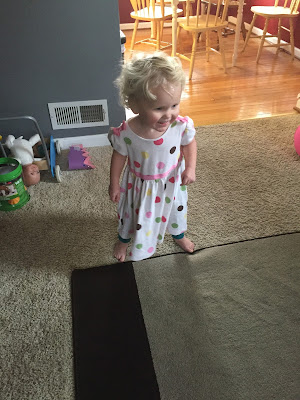 "Mama, take a picture of me in my polka dot drwess"
She loves that polka dot dress, that actually fits Taryn better but oh well. 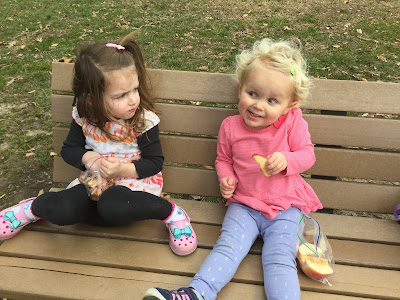 Her little friend Olivia thinks her expressions are crazy too. 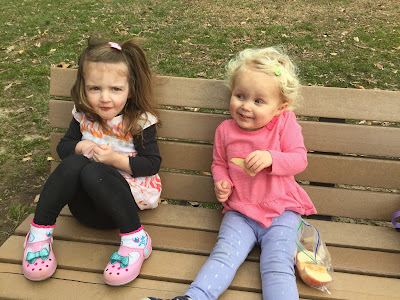 Haddie is learning about eyebrows and is very aware of them. (See expression above!)
When she really wants something, she will stop what she's doing and focus on looking right at me while moving her eyebrows as far up and as far down as she can, as if to say, "Oh ya mama! That sounds good!" She's a crack up! 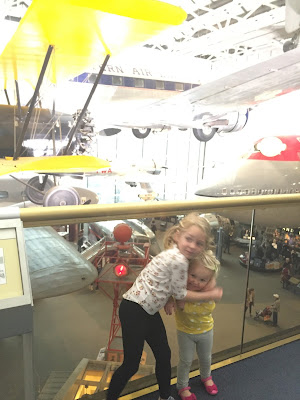 We made a quick stop to the Air and Space museum two weeks back. The girls kept asking all day, "Are we going to the museum now?!!!" Haddie and Taryn love the adventures that take us downtown to DC and the museums are perfect for their ages. We hadn't been to this one in a long time so the girls ran around gasping and pointing out airplanes as if they had never been there before! 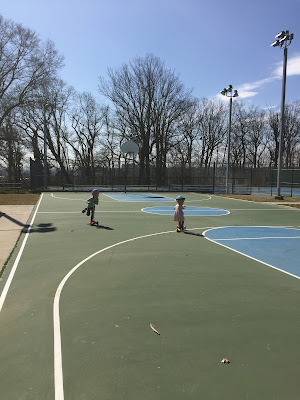 Scootering- as they do best! 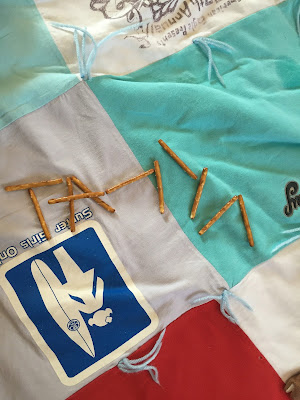 Taryn: "Mom, I spelled my name with pretzels! Take a picture of it!" 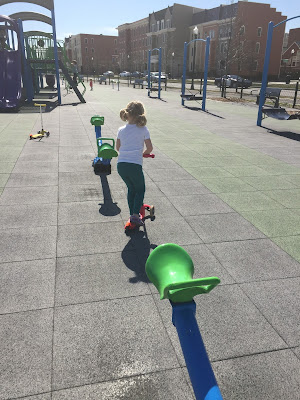 Taryn can move on that scooter. It's her favorite toy and she can zip so fast with it.
She's also our climber of the family. She fell last week off the top of a slide (like 7-8 ft high) and it terrified me. She recovered quickly but man, stuff like that really scares me. 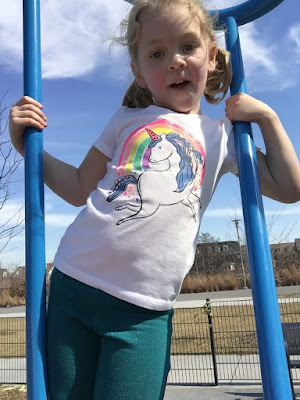 Taryn hit her funny bone at dinner. Me: "Taryn, You're suppose to laugh! You hit your funny bone" Taryn; " Let's call it the hurty bone!"

At dinner, Taryn is becoming super adventurous with her food. We always make the girls try one bite of what we're eating. Taryn tried a bite of pulled pork. Me: "What do you think? Taryn: "Umm… Just a minute….I'm thinking….It's a little good" she said with a growing smile on her face! 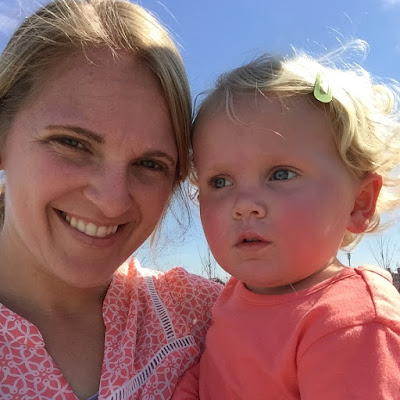 Spring is here and we're loving the time outside with all the sun. We've brought out the sunscreen again - tis the curse of the blonde hair and blue eyes! (well….mine are green but basically it's the same)
Those red cheeks tell me my girls are tired and that they've enjoyed their time outside. 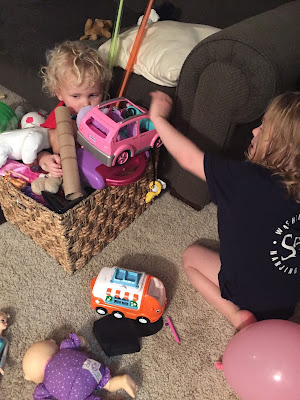 I asked the girls to clean up the toys while I washed dishes in the other room. When I came back into the front room, I found Haddie in the toy basket and Taryn was seeing how many toys she could stack on top of her. A very creative way to clean. 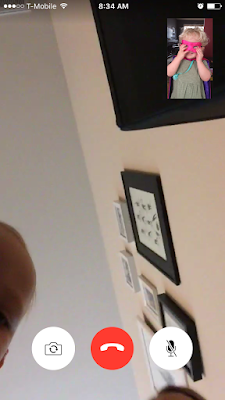 While FaceTiming my sister Mackenzie and the girls' cousin, Margot, Haddie dressed up as a super hero and showed them how she could fly. I love her little mask on at the top right.

Never a dull moment with Taryn and Haddie!