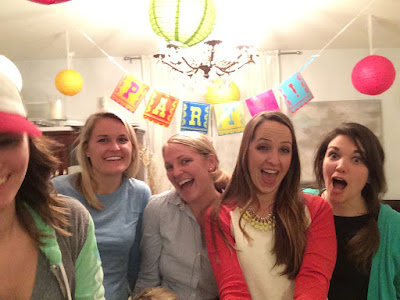 I turned 28 years old!!
We took this picture at the end of the party so there are some great people missing!
pictured: Lindsey, Kat, me, Ali and Rachel courtesy of Ali's new selfie stick ;)

My friends threw me a surprise party two days before my birthday and it was a crazy awesome surprise! Tyson had been helping to keep it a secret for a few days and with only one accidental slip up of him getting a text from my friend while we were using his phone for GPS in the car, it was a complete surprise! Tyson was quick to create a diversion and told me I would have to wait until Tuesday, my actual birthday, to find out what the surprise was.

A few days before Tyson was dead set on making me a birthday cake, a tradition we've kept up for 7 years! We went on a family walk while the cake cooled and came home to ice it only to find out the icing for the german chocolate cake would take 2 hours to cool. That's what we get for using a new recipe and not reading through all the instructions before hand! Tyson was frazzled and I was not sure why. I know he doesn't love cooking, the girls were grumpy, and we were trying to get them to eat dinner at the same time Tyson was trying to figure out the cake. (Later I found out he was super stressed because the cake was taking a lot longer than planned and the party was to start soon)

Then Tyson gets a phone call, and he looked really serious. He took the call outside and I thought it was something for church. When he came back in, Tyson said our neighbors & good friends the Essigs little 2 year old boy fell and they needed to take him to the ER and asked if we could come watch their other two kids.( This was the fake story to get me to my friends house where they party was going to be - no questions asked)

I jumped up from the table and started packing up my purse with sippy cups etc.. so we could get out the door. Taryn was devastated and cried a lot. Tyson swooped up the girls and took them outside to get them in the car. I locked up and when I got in the car, I was surprised Taryn was quiet. (Little did I know Tyson had JUST told Taryn about the surprise and she was SUPER excited and stopped crying instantly. Tyson told her she couldn't spoil the surprise though! haha!)

While we drove the 2 blocks to their house, I explained to Taryn that we might see blood, that we would ask questions and that we are going to play with our friends and help them. (Tyson said at this point he had to keep rubbing his mouth and chin because he was about to explode with laughter! He said I was taking this so seriously!) Haha!

We pulled up and I saw our other friends, the Williams, car in the drive way and I could see them in the house and got super super confused. Then we saw our friends the Haley's coming down the street and it hit me! This was a surprise party!!! I started laughing and was completely surprised and still really confused! :)

After a few diversions, we walked into the Essigs home and they "surprised" me. Our friends were all around and it was so great. I was touched with how sweet my friends were to plan this surprise for me. I've never had a surprise party thrown for me and man- it really does make you feel special! 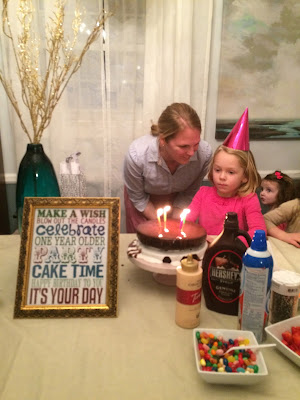 Taryn helped me blow out my birthday candles ...and that cake was SO yummy! It was like a s'mores cake but made with coconut oil so it had such an amazing flavor. Note to self: Coconut oil is so good in chocolate cakes. 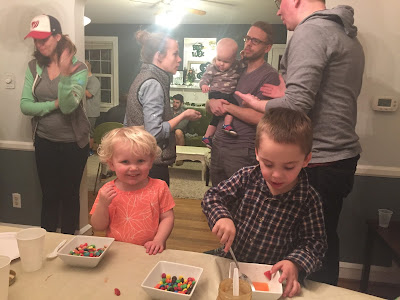 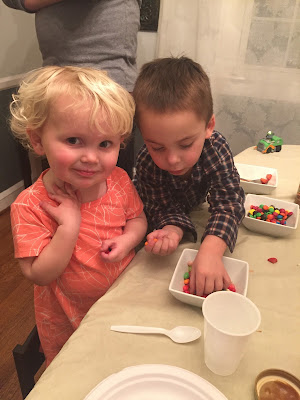 That little hand under her chin! It's Haddie's newest camera pose! :)

These two munchkins (Emerson & Haddie)  pushed their kiddy chairs up to the table and ate their weight in ice cream toppings while the adults were busy talking!  (though I did take the time to snap a photo when we discovered what they were doing. Lincoln (Emerson's dad) stopped the madness from continuing shortly after. 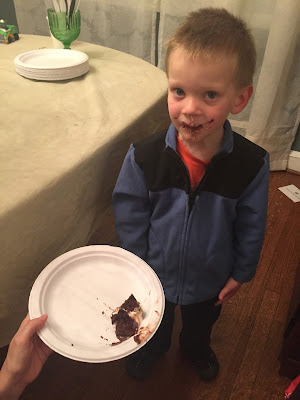 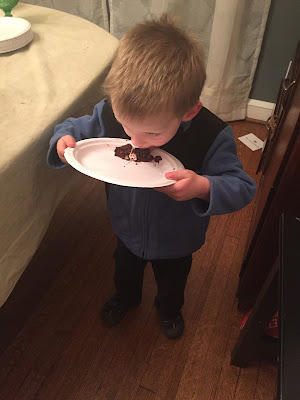 I think Logan enjoyed the birthday cake too! 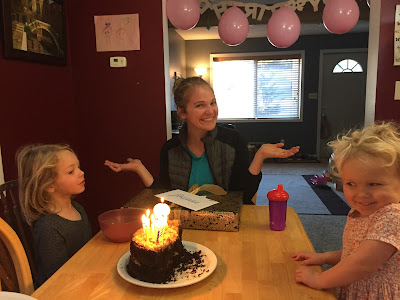 On my actual birthday, we ate the German chocolate cake Tyson made for breakfast , the girls and I spent a lovely day outside at the park with friends, and for dinner we had a coupon for some delicious Pork Barrel BBQ. 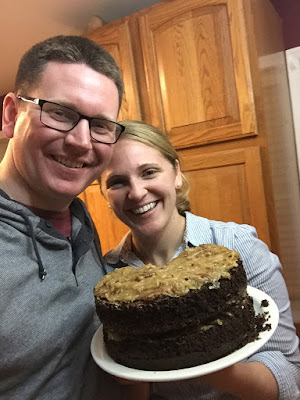 It was a great birthday and I felt so very loved from family and friends, sending texts, FB messages, emails etc…
Thank you to all of you!
Love you all!