The first real snow of the winter! 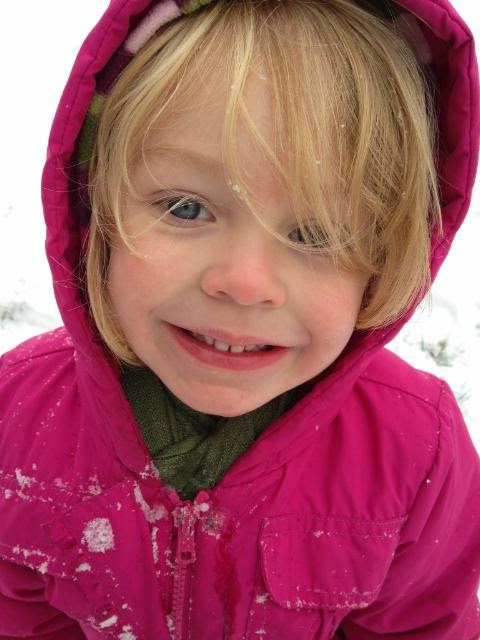 Taryn woke up a few weeks ago and we told her it was snowing! It was like Christmas Day all over again. This girl was jumping up and down and asked over and over again to go outside "right now!' to play in the snow. We ate breakfast and got all bundled up- which always takes forever. Taryn was so antsy. We finally made it outside and Taryn ran through the fresh snow of our courtyard. She made several loose snowballs and immediately threw them at me. She was laughing and having so much fun. Luckily this year we found an awesome pair of snow boots for super super cheap that fit her perfectly. No longer did I have to worry about her feet getting cold. Now maybe next year I will have proper gloves. But I did make sure that her gloves would last through several snow ball makings. I put those little plastic gloves you use to clean the bathroom with on her hands first so they wouldn't get wet. then I placed two layers of gloves on her. Not the best but it did the trick and she lasted 1 hour out in the snow! You can laugh at my pathetic attempts to keep her warm. Last year I did plastic bags around her feet and stuffed them into her boots (not weather proof) it worked but I'm making progress each year ;) 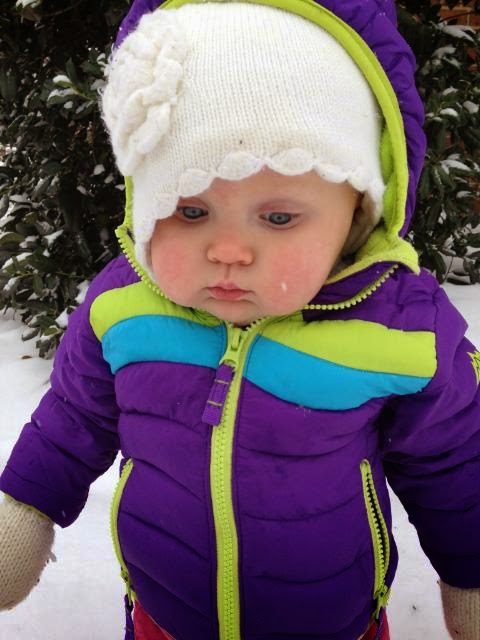 Hadleigh wasn't into the snow. At one point I was taking pictures and put Hadleigh standing up in the snow. She just stood so still and whimpered. Not a happy camper. She spent the rest of the time in my arms just watching Taryn play. 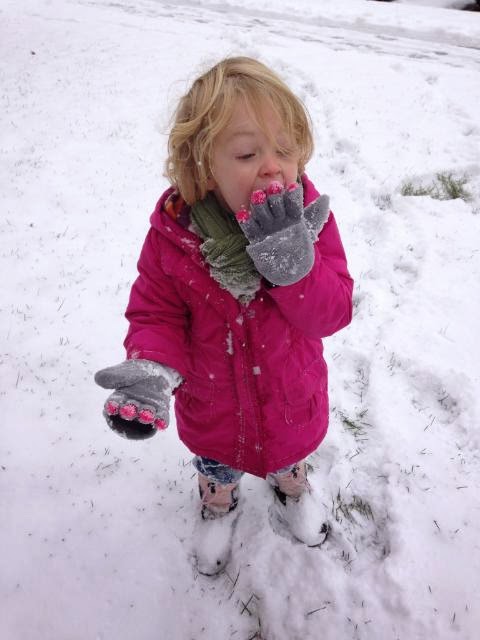 Snow play is never complete without eating some! 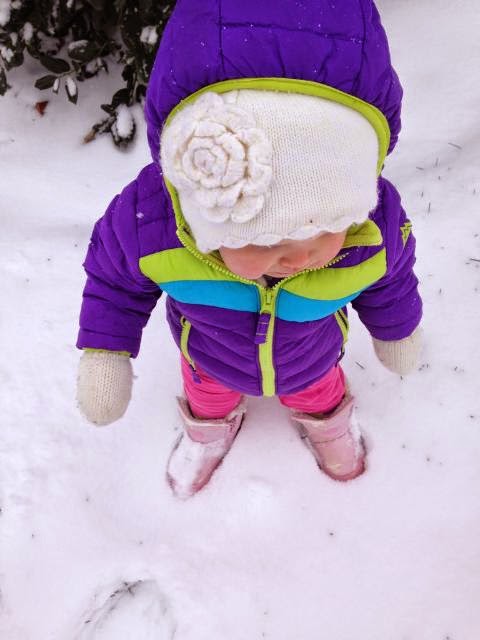 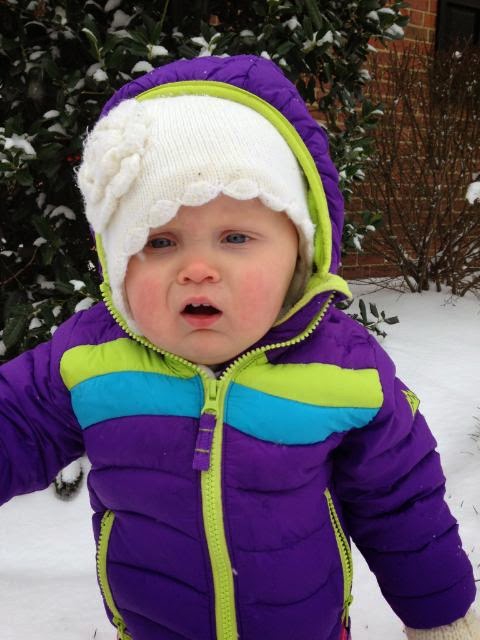 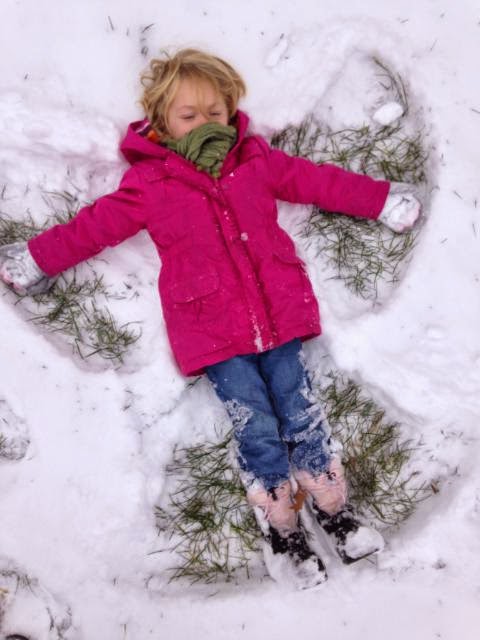 Snow angels! She practiced multiple times inside our apartment before going out to the real snow. 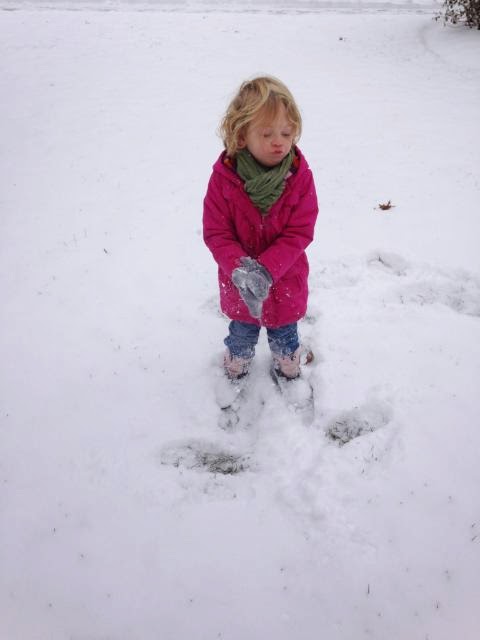 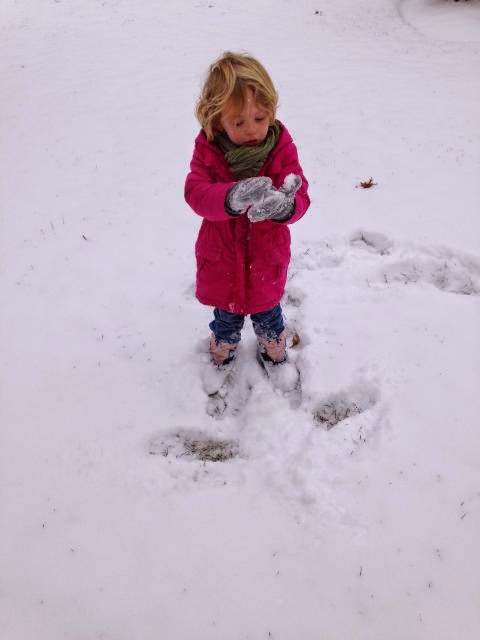 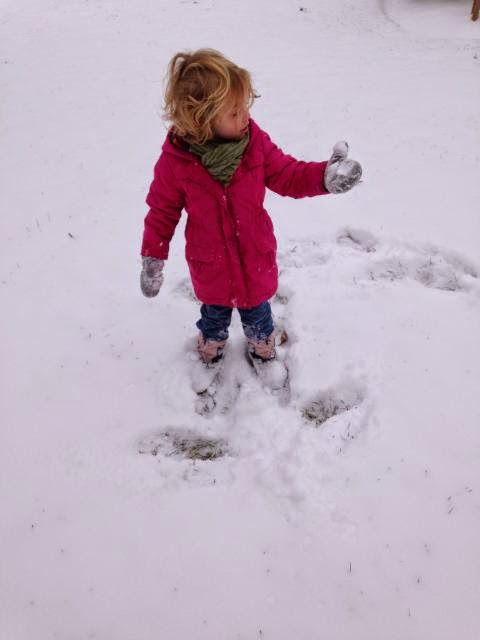 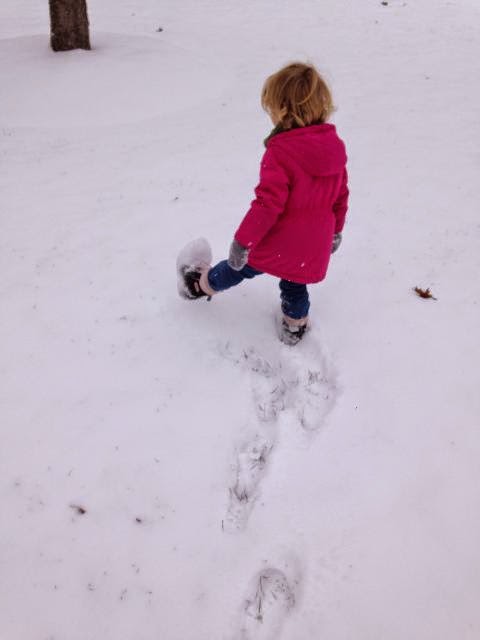 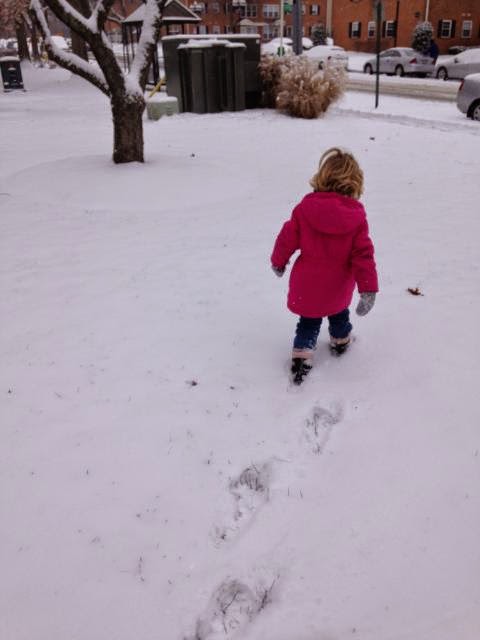 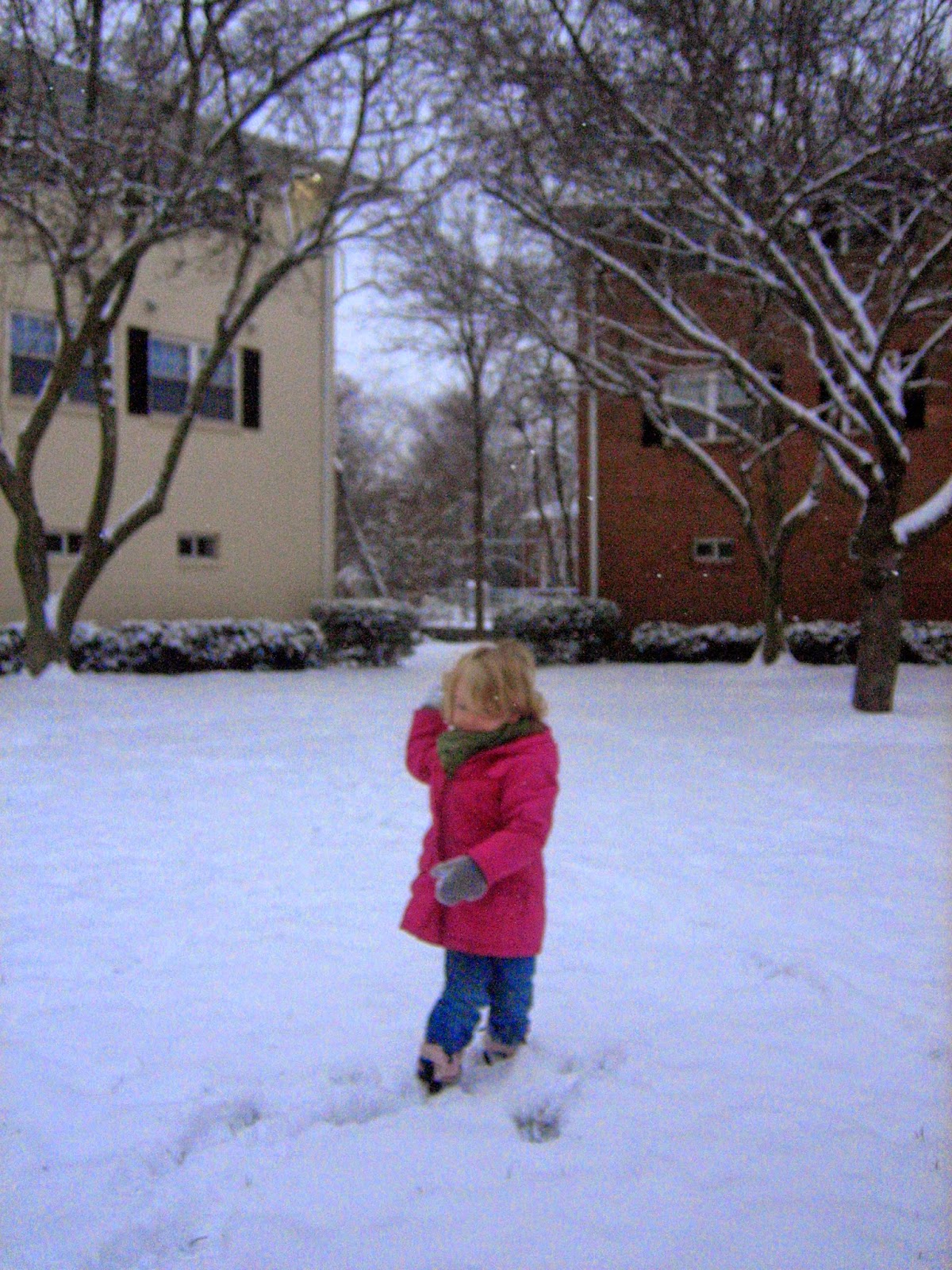 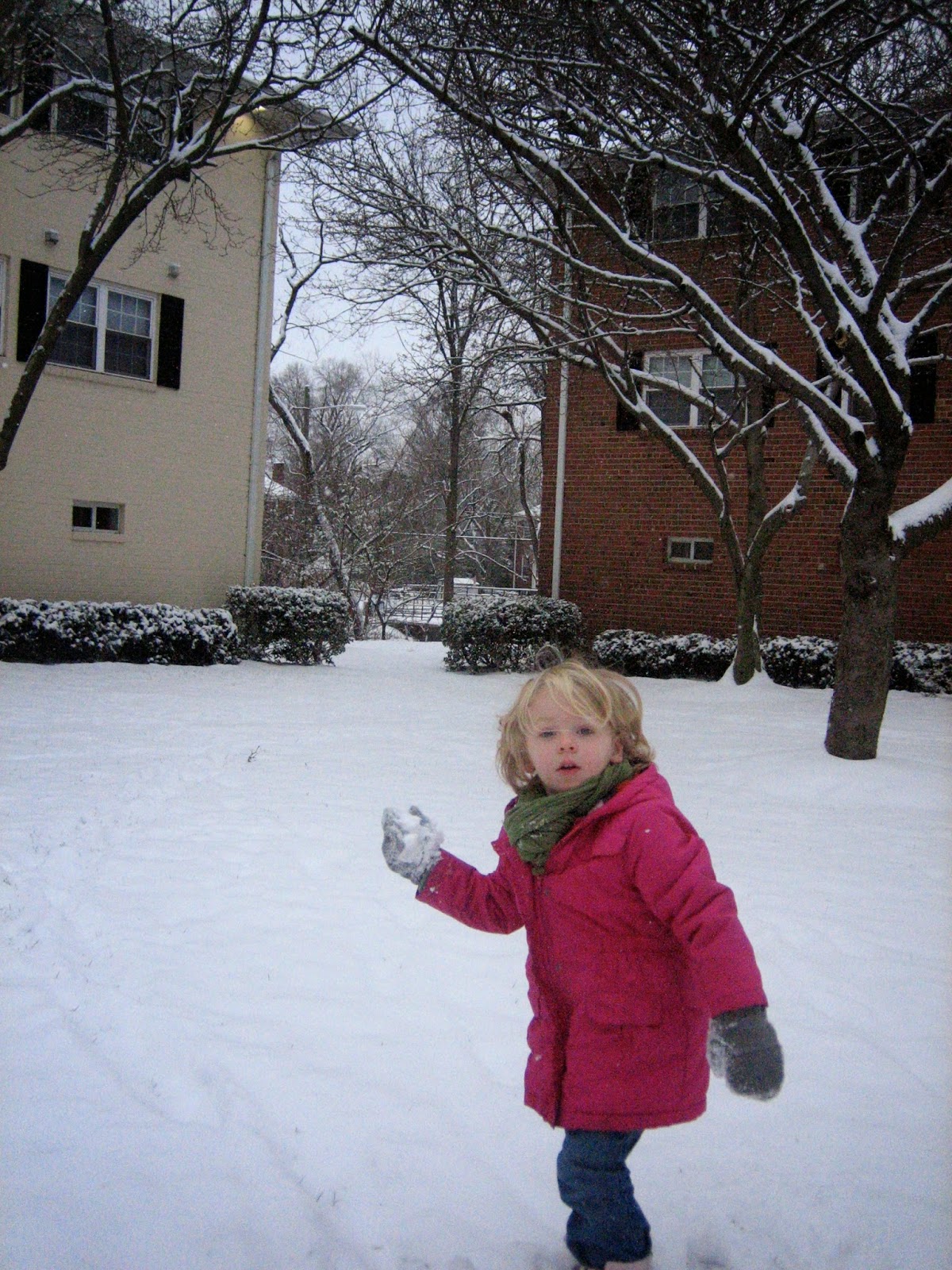 She has pretty great aim. She kept saying, "Mom…don't throw a snow ball at me!!!" in the most teasing voice ever. Don't worry, I made sure to help her out ;) 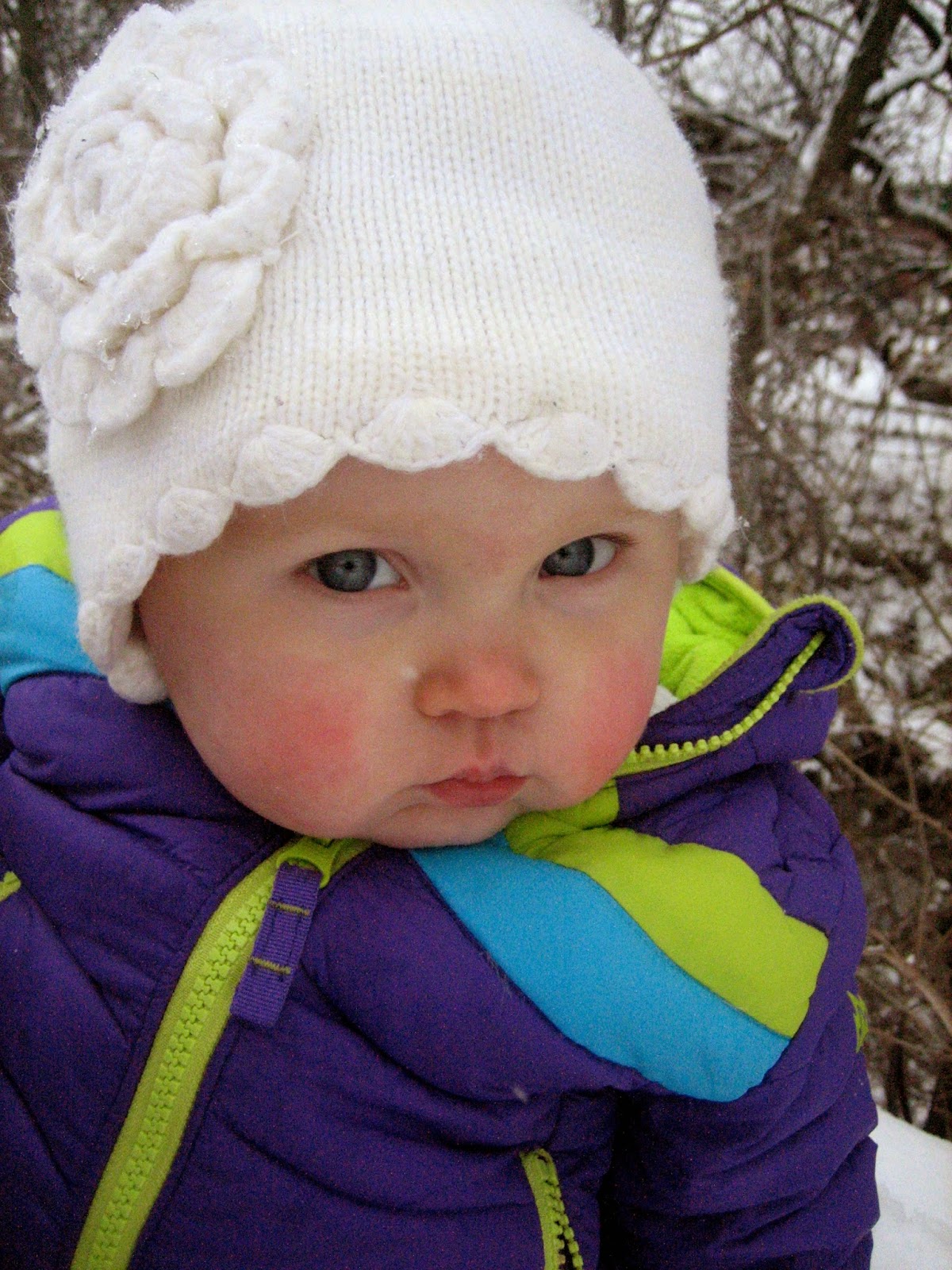 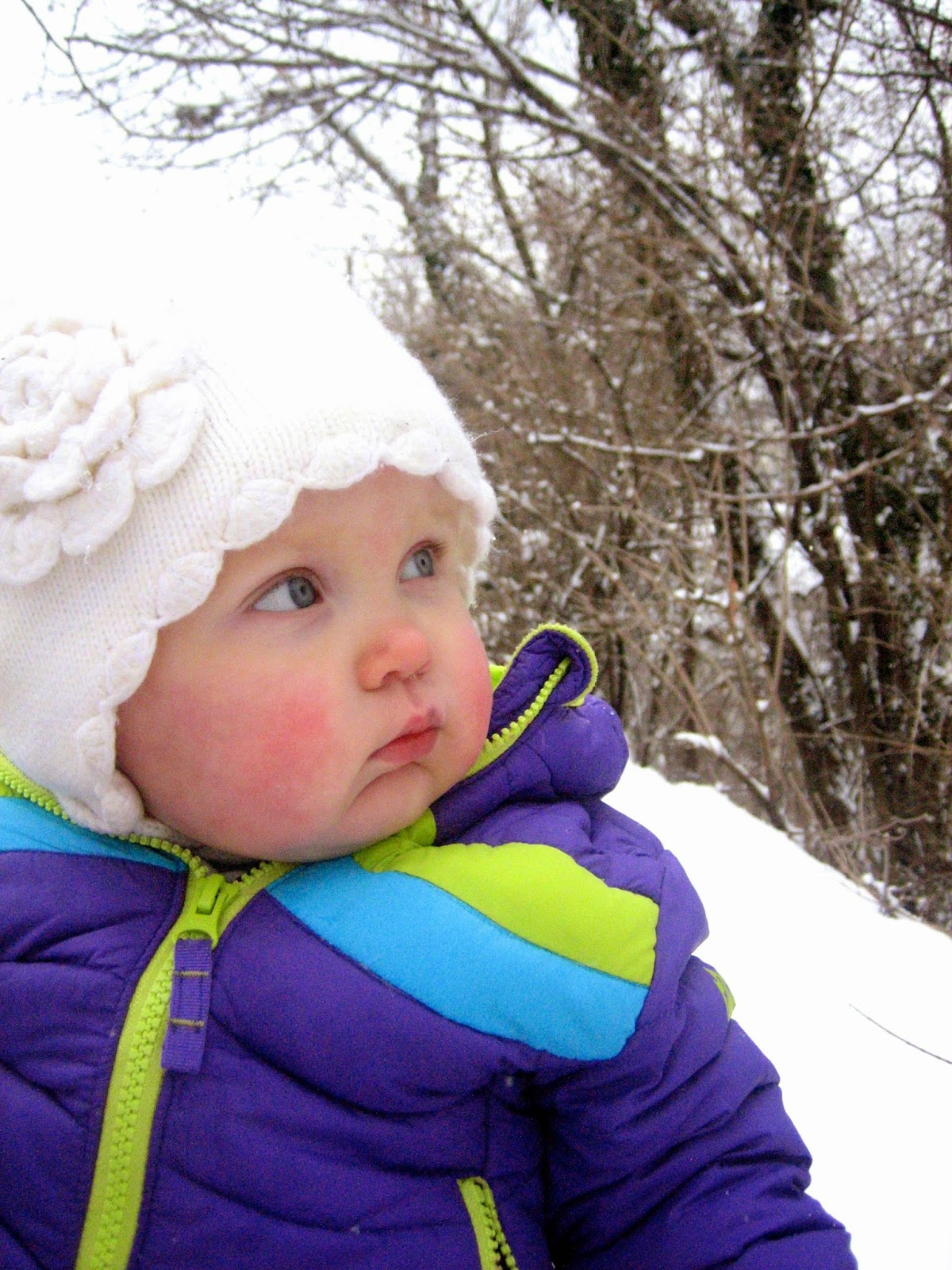 Not so sure about this snow stuff. I took a very similar picture of Taryn in the snow while we lived in Bologna. Actually, going through those old pictures, I am shocked at how many pictures I have of those two girls doing almost the same thing or looked so much like each other. 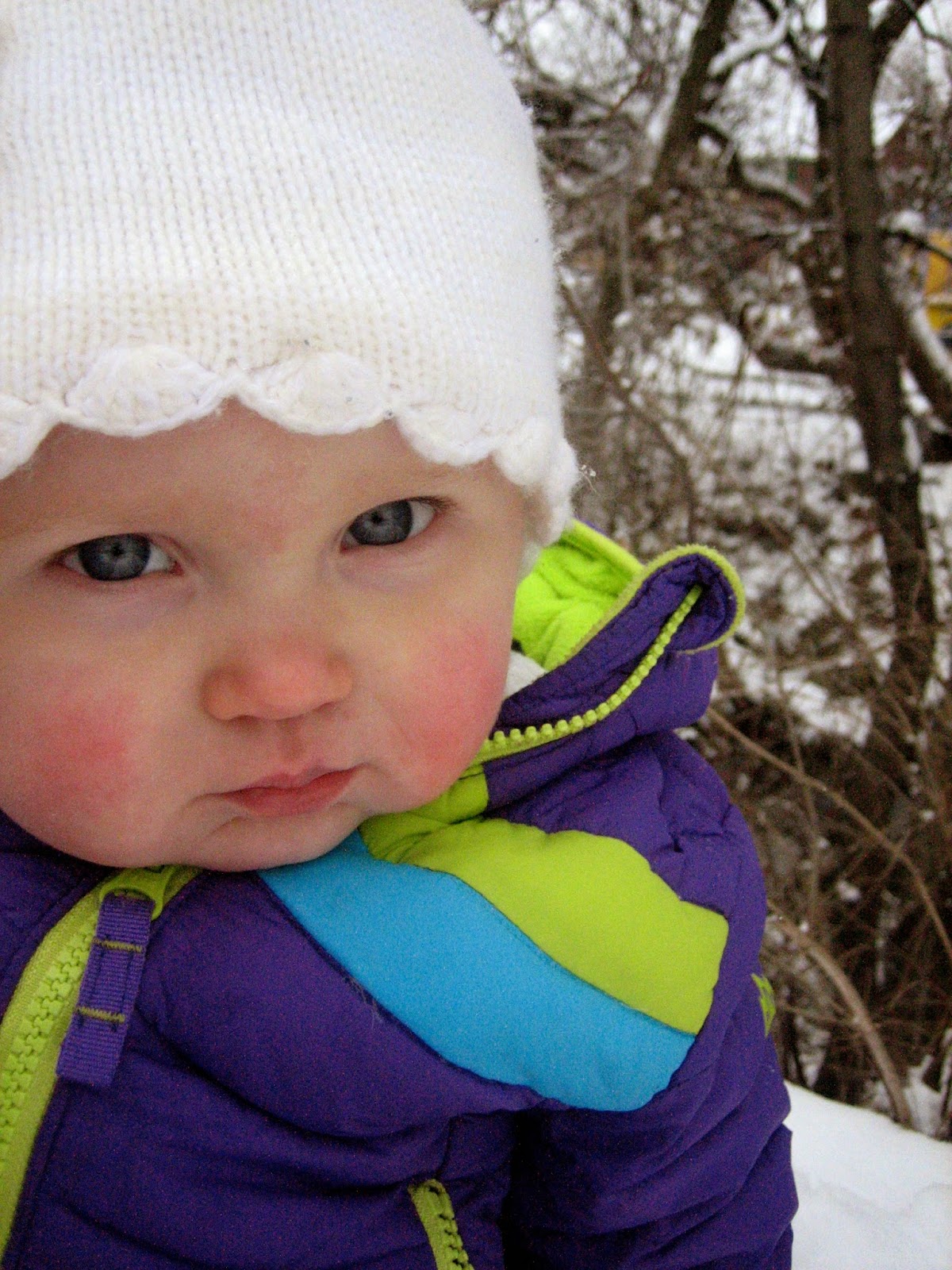 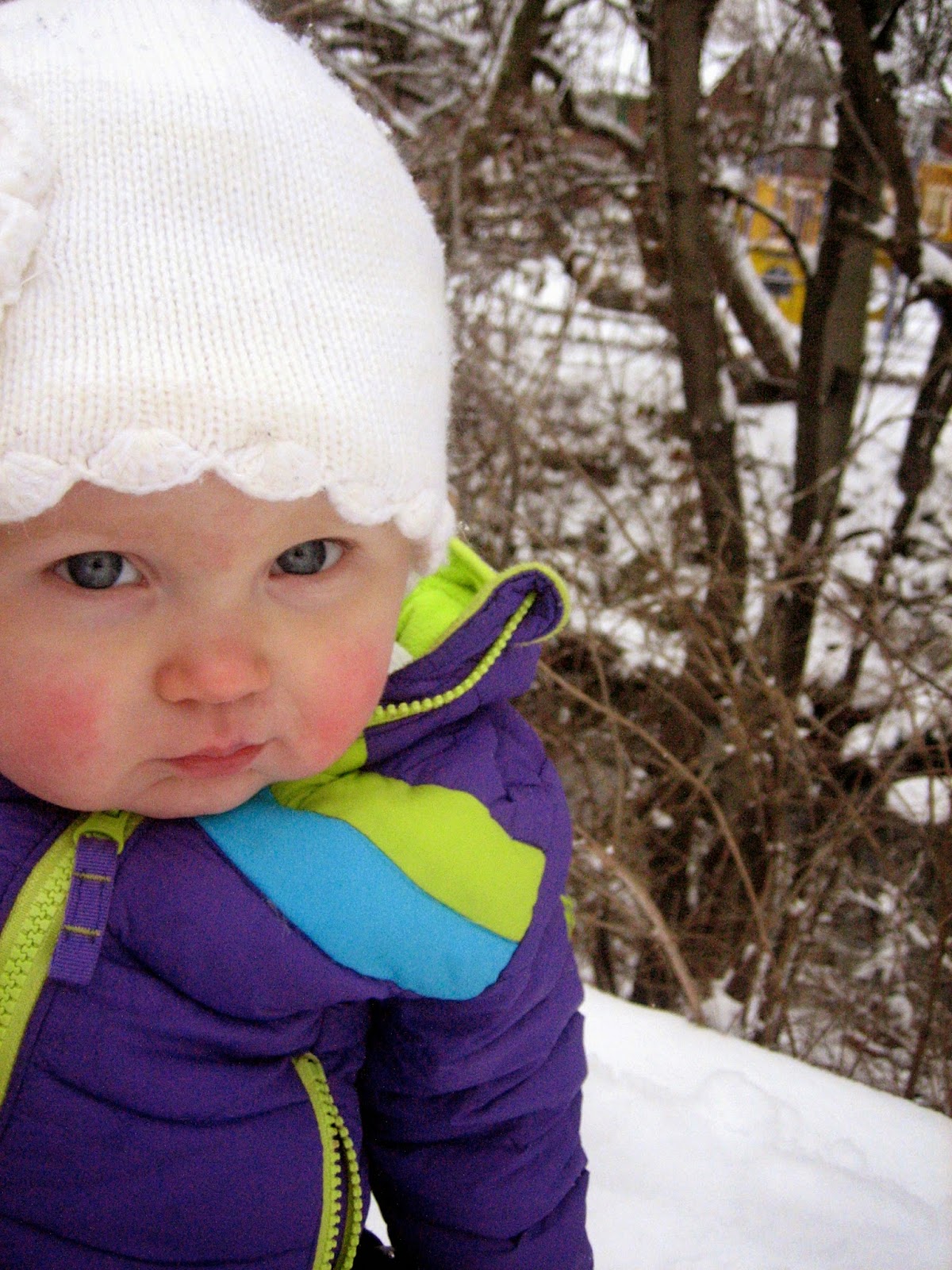 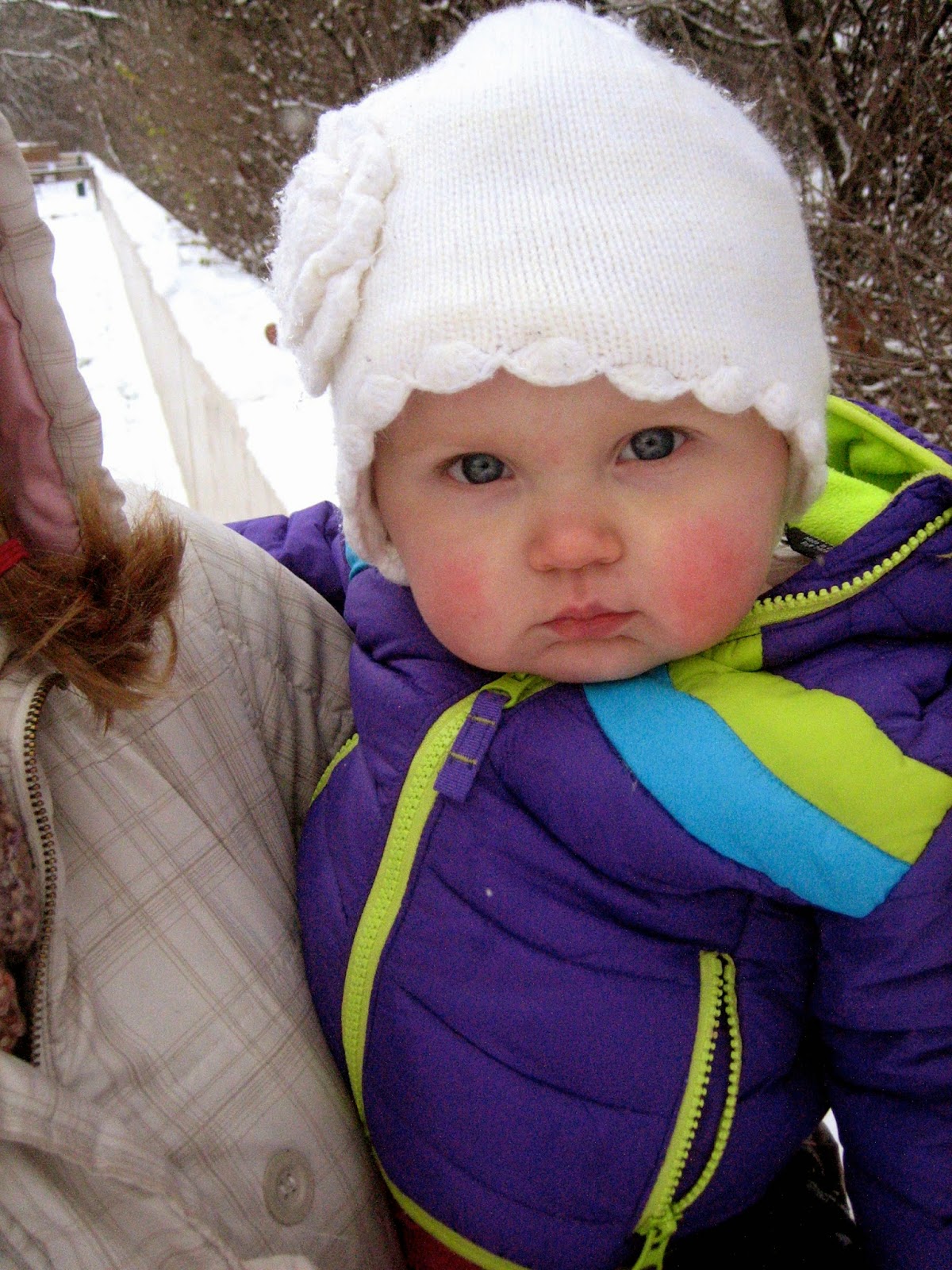 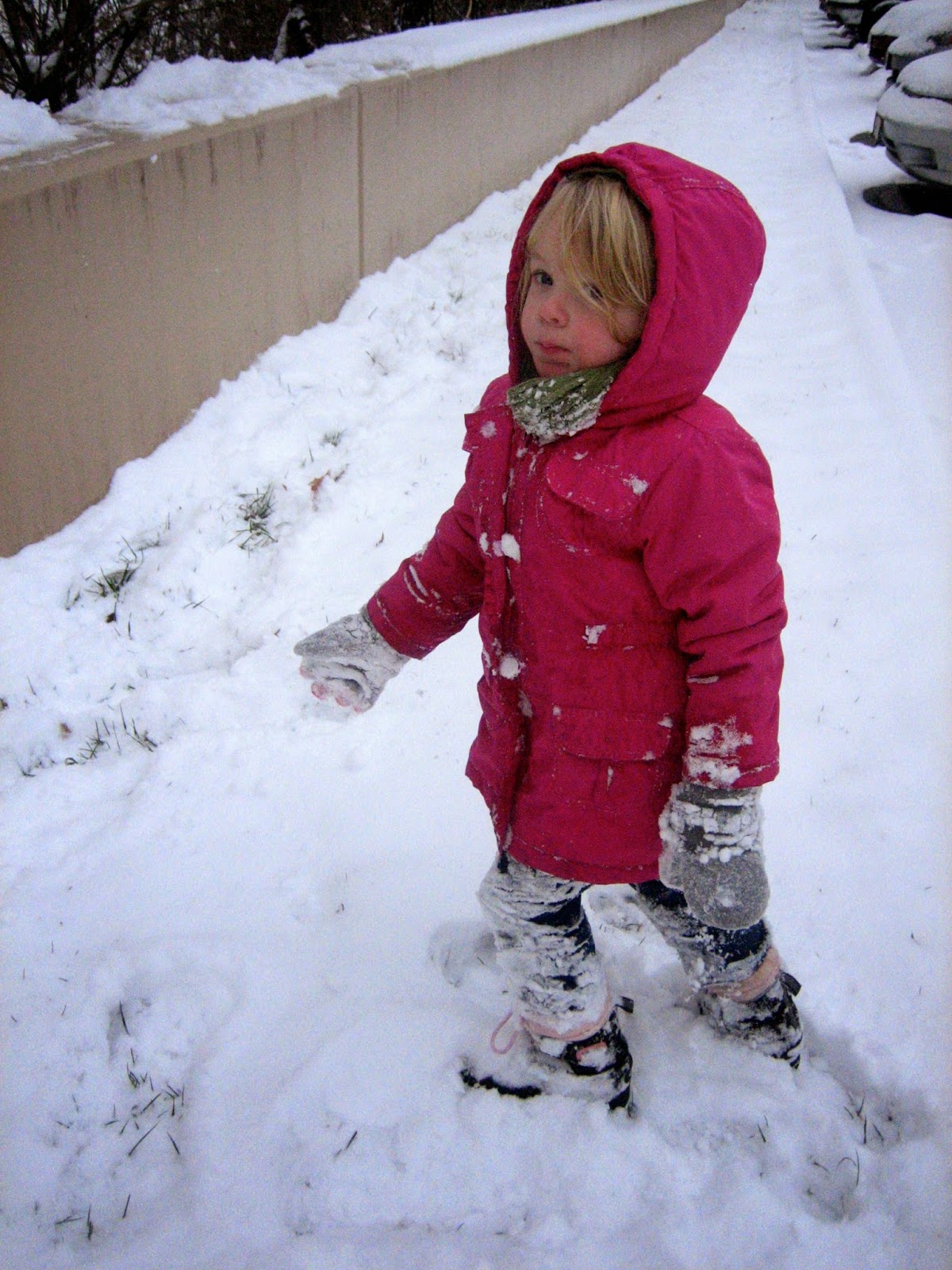 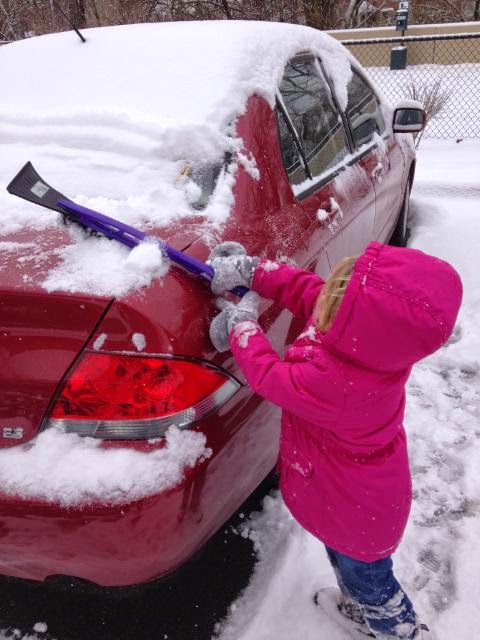 Because we had planned to not drive the car that day I wanted to get the majority of the snow off as it started to die down so it wouldn't be frozen by the time I left for work at night. Taryn thought it was so fun to help me brush off the car and she did a great job too. 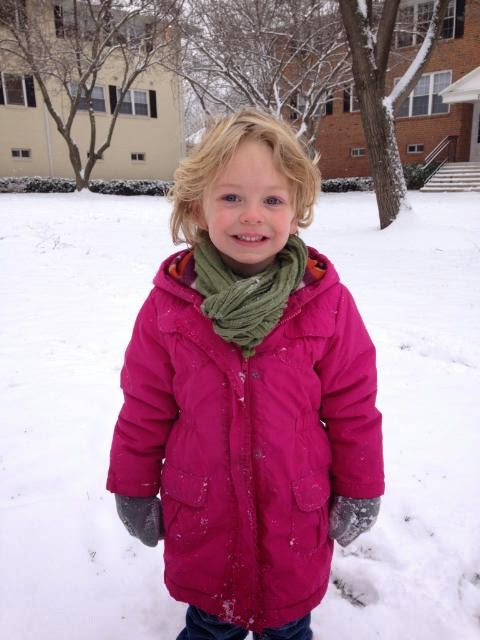 After an hour she had started crying and wanted to go back in, saying she was done with the snow. She asked for hot chocolate so she could warm up and I was happy to provide her some with lunch. About we week later it snowed again but it was even lighter. Taryn woke up for the day and looked outside the window. When she saw the snow, she had the grumpiest face on and turned to Tyson and me saying, "Ugh!!! Why did it snow again! I don't want the snow!!!" hahah! And that is why investing in good snow gear is not worth it for us. She has a good run at it and now she's done. She hates not being able to play at the parks everyday. But I will just remember how happy she was to play in her first real snow of the winter, because it's pretty awesome to see that much excitement in a little child.