A moment to catch our breath, now back to it all 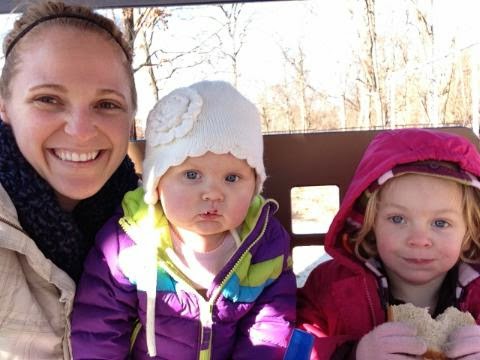 Our girls only clubhouse at the park.
Taryn was super excited about the fact that it was JUST for girls. Though she really loves the little boys her age that she gets to play with! 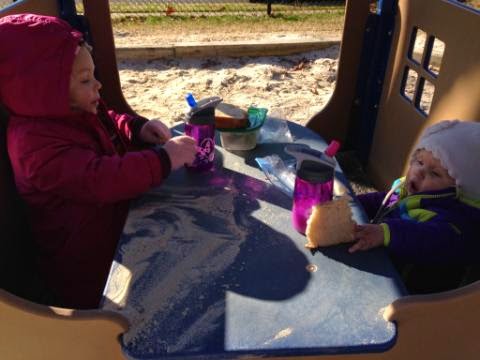 These girls were so bundled up! It was a very chilly day but we were happy to be outside! We brought our lunches the girls did very well at eating though they were big puff balls. But hey, they were super warm!!!!! (Hadleigh's gloves were taken off so she could hold her food by herself) 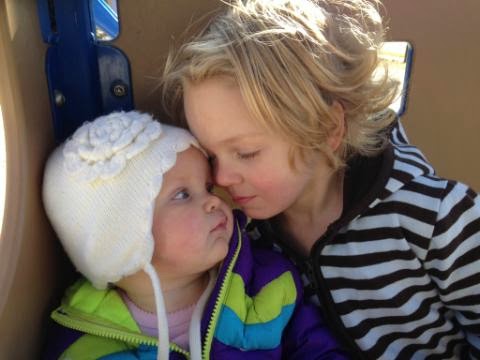 I asked the girls to look at the camera and instead they snuggled. I'll take that any day.

Hadleigh has gotten into this habit of batting at people's faces. Taryn has been the victim of some scratches from her baby sister but yet, they still give each other multiple hugs during the day. Really, I never knew that the copy cat stage for siblings could start so young. Hadleigh wants to do everything Taryn does, or have everything that Taryn has. Down to the same color of balloon to sitting on the couch when Taryn is. It's adorable and sometimes frustrating but I'm happy that Hadleigh already looks up to her big sister. 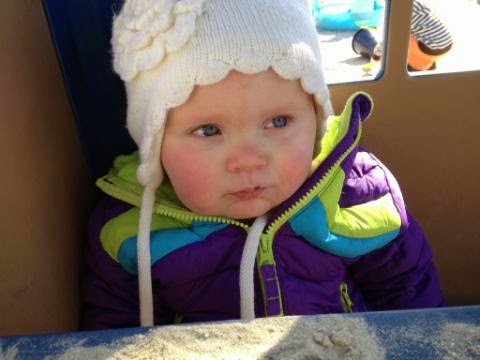 I think Hadleigh looks a lot like I did as a baby right here.

This poor little girl had a few sicknesses (minor- yeah!) over the holidays and to top it off, she fell and hit her lip, separating the connective tissue between the upper lip and gum. Thankfully when we called the doctor a few days later when it just kept bleeding- dude... the mouth bleeds a whole lot!- they said it will heal and grow back. And it has! How crazy awesome are our bodies! She made it through those little sicknesses and still gained weight for her 15 month appointment.
Oh ya!

The snow has pretty much melted and we will be back to park going weather by the end of the week which makes me so happy! I'm happy that life slowed down a bit over the holidays so we could all catch our breath and spend a lot of quality time together. Now, things are gradually picking up and I'm looking forward to getting back into it all.