I cried in the Grocery store. Now I am going to pay it forward. 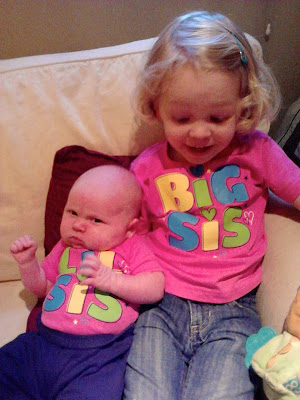 Taryn said, "I love you!" to Hadleigh right before I took this picture.

For the past six weeks, Tyson has been volunteering to go grocery shopping for me. It has been the biggest help! I am trying to find my new rhythm with two little ones now and one thing I need to get down is grocery shopping and what time of the day works best (I'm not a huge fan of shopping at night.) So yesterday I tried -as I have a few times before- going mid morning with both girls. Hadleigh was bright-eyed and Taryn was obedient as she walked in front, behind, or next to me the whole time, clutching her special bag of marshmellows.

I had two more small items to grab when Hadleigh started to cry because she was hungry. I had made it  a rushed shopping trip up to this point but I still didn't make it out before she needed me. So I directed Taryn down the last aisle, trying to get Hadleigh to suck on my pinky finger because I didn't want to dig for her pacifier (steering a cart and a toddler with one hand is hard!) I almost ran into another lady because of the extra long cart with the toddler car at the end of it. She looked at me and with the kindest eyes, seeing that things were getting a little difficult for me and said, "Can I help you with anything?" I thanked her and waved her off saying, "It's ok. I'm fine." I hate asking for help or accepting it. It's something I'm trying to do better at.

Then while making my way to check out and waiting in line, I finally had to take Hadleigh out of her car seat to hold and calm her. The sweet ladies in front of me made nice comments and asked how old Hadleigh was which made me smile. Then the store manager came and opened another lane for me, pulled my cart to the new lane and then proceeded to unload my entire cart saying to me, "You've got your hands full. I've got this for you."
That's when the tears started coming. Everyone had been so kind and sweet. I wasn't crying because I was stressed or flustered. Actually, I had found the shopping trip to have gone quite smoothly and I was so proud of Taryn being such a good girl and happy that Hadleigh had made it so long. I was touched by how many kind people and veteran moms were willing to help me and were completely understanding of my situation. Another mom from a different line came to my lane and loaded up my cart for me. She said, "I know how it is. I've been there- I'm a mom too!" I tried to avoid eye contact  while saying "Thank you!" in my strongest crying voice that I could muster up because I didn't want to be that girl who cried in a grocery store but it was too late.

Thank you, wonderfully kind strangers. You made my day. I made it a goal to pay it forward when I see a situation where someone could use an extra helping hand. I cried in a grocery store and now I want to help someone else just as I was helped.

Maybe it's not so bad to go grocery shopping at night or Saturday morning when it's super crowded...as long as you already have food for that night's dinner :)
Posted by Brianna at 6:22 AM