Be Prepared: The lesson we learned after 21 hours without power.

After our adventure to the Botanical Gardens, Taryn fell asleep in the stroller almost immediately so I decided to take advantage of my time in the city with a sleeping little one and see some sights and maybe even buy some cookies for later from a bakery :)

I was making my way up to the Eastern Market for their big Saturday market and I happened to look behind me as I prepared to cross the street. I saw the largest blanket of the dark clouds growing closer and closer. About a minute later, two men passed by and after overhearing one of them say to the other, " It's going to get ugly real fast here. You better go!"  I made a beeline to the nearest metro but before long, I started to feel the sprinkles of rain hit my head. Luckily, I had Taryn's "Bubble" or rain protector with me- AWESOME!- So I threw it over her while she kept on napping and I kept pushing her to the metro.
The end was in sight. I could see the metro.
All I needed to do was cross this teeny tiny cross walk. And then it hit. The winds burst by us (blowing my dress for all to see!), some of the near by windows blew out with the loudest crash, and then the water came. Like someone turning on a giant faucet, the rains just poured! I ran while holding my dress (because the winds were still blowing it everywhere) and pushing Taryn with one hand while I splashed through puddles that formed instantly. We made it underground of the metro and compared to everyone else, we were bone dry. I had to smile as I saw one man pass by me minutes after I had entered the Metro. He was soaked from head to toe and his shoes squeaked from being filled with water. I was so grateful that Tyson and I had been to that side of D.C. before and I knew exactly where the metro was because there was no time for error. 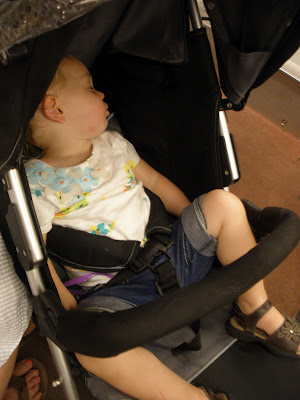 The best part of it? Taryn slept through the whole thing :) Thank you, rain guard "Bubble"

Our metro stop is connected to an underground mall so I was able to walk from the Metro to one block away from my house without getting soaked.
Then I got a call from Tyson.
He had been studying at the library. The power went out there so he came home only to find that our power was out too. It was 5:00pm and growing dark. We decided to quickly grab dinner at a nearby burger place and not waste precious daylight (or the cool air in the fridge by opening it up)  so we could go grab some essentials- like candles.
We live in the basement so it gets dark fast. We had one flashlight. And it didn't take us long to find out that we need a new one, bad. We had to laugh at it when ever we tilted it and the top popped off and batteries went flying in front of us. Is it ironic that I had just given our other flashlight to my sister to use for a camp out?
Our candle lighter didn't last very long as the lighter fluid ran out (it was almost on empty but we thought it would make it -Lesson Learned)- one more thing to add to the list of "Must By for the next Blackout/Emergency"

We packed everything in our fridge on ice after realizing that the power wasn't going to come back on anytime soon. We mopped up the water and after we felt like we had done what we could, we watched a movie on my laptop until the battery died. We were very fortunate that the storm brought a burst of cool weather so we were able to sleep with the windows opened and not die from heat & humidity.

Be prepared:
What I am grateful for after this experience

* Tyson and I remained calm throughout the whole Blackout. We worked together and got what we needed done.
*I had fully charged my phone before the blackout. I was able to still communicate with everyone and find out who had power around us.
*I had already done the laundry and ironed. One reason to always stay on top of laundry. And for me, another reason to be grateful that I have a W/D in my apartment to make it easier.
* We had a giant cooler in storage that was ready to hold the entire contents of our fridge.
* We had some easy snacks/meals- bread, peanut butter, jelly, granola bars, crackers, fruit snacks etc... Items that didn't need to be heated up or required an electric something or other.
*We have 72 hour kits and Emergency Car Kits so if we really needed something, we would be ok for 72 hours.

What I Wish I had prepared:
*Matches
*A full Lighter or two
* Candles
*More than one flashlight- that worked :)
* A car charger just in case we needed to charge out phones- (using a friends car :)
and so much more

Blackouts happen often in this region. From what we have heard from talking to friends, it's not uncommon for power outages to last for days, either. One couple told us of a 3-4 day long blackout that just happened last summer. Can you imagine? 100 + degree weather, plus humidity?! And with a toddler?! But we also learned that the outages happen in pockets so your friend two streets down may have power- and room to store your fridge items :)

We knew before we moved here that we would be faced with more natural disasters, power outages, and realistically- more potential terrorist attacks (we live next door to the Pentagon!!) than in our previous locations of Arizona and Italy.
I remember telling Tyson,
"As soon as we move in, I want to start stocking up our food supply, water reserve, and emergency supplies."

Little did I know that we would experience our first "preparedness test" just a month after moving here. So we have a lot to do in order to prepare ourselves for the next blackout, snowstorm or emergency.
We will be ready!