Thoughts in November and lots of Thanks 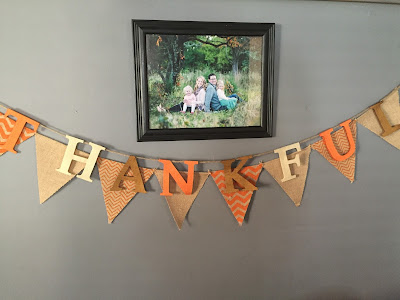 This month always brings lots of thoughts of family, traditions, and reminding myself to be grateful for the little things, as well as the big. We've hit a real good stride recently but that doesn't mean we have be free from hiccups now and then. I just think for us it means we are better able to handle the hiccups and recover from them faster. Like loosing my job when my previous employer decided to close up shop. It was hard at first (though I LOVED the extra 4 weeks of sleep!) but now I'm back to working again and I'm grateful for it!

Patience is not my strong suit and I pray daily (several times a day!) for more of it in my life. I want to enjoy these precious days with my girls because they are going super fast. I'm grateful for those moments where I have enough patiences to handle these "little" situations with my girls, or just in life.

I'm grateful every day for Tyson and his thoughtful spirit. When he returns from work, I always become giddy because it's just so much better to be with him! He does so much for our family and makes life exciting and full of joy! 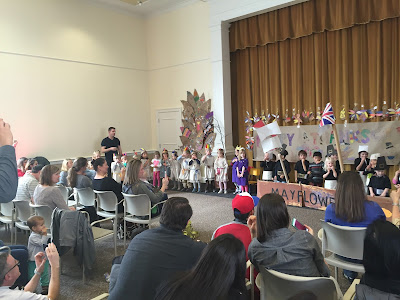 Taryn's preschool put on the cutest little Thanksgiving performance there ever was! This was the Tue/Thurs and Mon/Wed/Fri classes combined. Super cute kids all around! 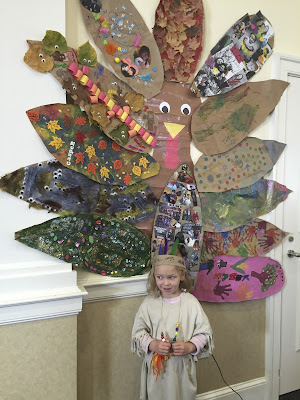 Taryn contributed to the class Turkey by painting her feather. It's the 5th from the bottom on the right side. She did it all herself and when she said she was done, I said, "Ok!" I didn't think much of it until another Mom committed on it. She said, "You can tell Taryn did her feather all by herself. I love that!" She may not really be into arts and crafts but she will put forth some effort every now and then. She's more of an athlete and I think that's great. I'm thankful for who she is and what she likes to do. 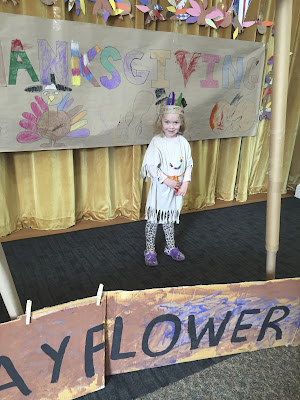 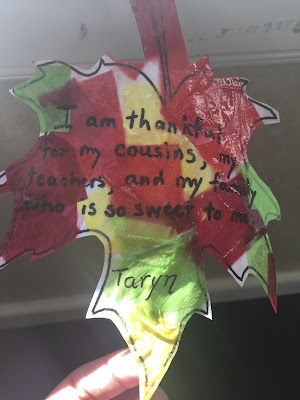 This is Taryn to a "T." She talks all day about her cousins, loves her teachers (church and school) so very much, and she always says the phrase, "so sweet to me." She has a very tender heart. 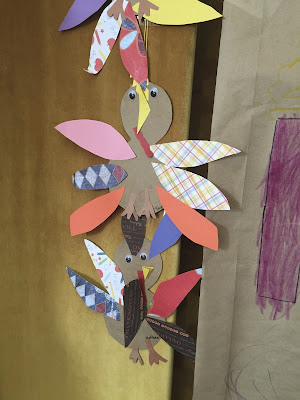 Taryn's turkey in the middle. 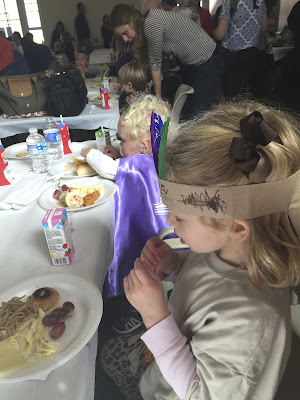 After the performance, families were invited to a potluck. The girls picked what they wanted and Taryn gobbled up the chow main, her new favorite food. Haddie insisted on wearing her super hero cape to the Thankgiving performance :) Little Haddie is just so happy about life and it has definitely changed my perspective frequently as I watch how she handles situations. 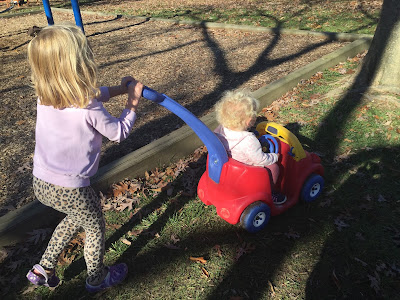 I am grateful Taryn & Haddie have each other as sisters (even though in this shot, Haddie is screaming for Taryn to "stop push-ing!!!!" her. Heheh! But then there are those heart warming moments where they help each other, show concern for each other's feelings, and share without being prompted. Those moments fill me to the brim with love!

A wanted to share this tender story from Taryn this past week
This past Monday we had a Family Home Evening about President Heber J. Grant's story, "The Coat: A story of Charity" which has now been made into a 2 minute video on youtube. It's worth a watch- and will make you cry! Anyways, we watched the video and read that story about how Heber as a young boy received a new coat made by his mother after his was worn and torn. He could now play freely in the snow without shivering. But while playing he sees another boy his age out in the cold, trying to warm himself by a house vent. Heber observes this boy struggling to stay warm. Later that day Heber returned home with no coat on. His mother asked what had happened to his new coat. Heber replied with teary eyes that he had seen a boy in need and given it away. The mother, with tears in her eyes, knew that her son had done a good deed for this other little boy.
We've watched this video several times over the years and it touches me every time. This year we created a Family Home Evening around it because we had the opportunity to donate our gently used coats to the Syrian Refugees. We explained that what we did for them was exactly what Heber did for that young boy.
We also explained that we would be participating in "The Giving Tree" where we can pick a tag off a Christmas Tree in our church's foyer and on it would be an item needed by someone locally. We would then purchase those items and return them to be donated to those who need it.
Taryn listened carefully and then said, "I want to wrap the present and give it to them. Then I want to give them the money from my [piggy] bank." I burst into tears! I leaned over to give Taryn and hug and say, "That's the most wonderful thought!" Both Tyson and I were so touched! Taryn is really sensitive and tender. She is such a great example to our family.