So us moms were gathered around a park bench, all of us facing the sand pit and big jungle maze of slides, swings and teeter totter. We were talking away, keeping eyes on our kids as they ran this way and that way. Each mom turned their attention to Taryn as she climbed up to the highest slide there (really....it's way too high for any mom.) Just like I had done 30 times already that hour, I reminded Taryn to "Sit Down" before going down the slide. It is a FAR FAR FAR drop to the bottom (like breaking a bone would be the least of your worries). Every mom has commented on how their heart skips a beat when their child's turn comes up to go down the slide. Clearly- this slide was NOT made by a mother. I used to go down this slide with Taryn when we first moved here. But, like with everything in life, there is a point where you need to let them learn and grow- and not be a helicopter mom.

Taryn sat down and started her decent (remember- this is like the 30th time for her that day). Then a ridiculously placed speed bump in the middle of the slide caught her off balance and sent her flying forward. At this point, all of the moms (and me) vocally declared, "Oh oh oh oh!!!!"
And bam.
She hit her face. Just above her eye.
And continued to slide down the rest of the useless slide.
I ran over and scooped her up in my arms.
She was shaking and screaming so much. "This is bad." I thought.
I came to a bench to try and hug her, calm her down, and see the damage. But Taryn isn't really a cuddle bug. She doesn't take to being comforted well. She pushed herself out of my arms and took two steps away from me. With huge tears in her eyes she turned around to look back at me.
And then I saw the big black shiner.
Already forming.
Another mom gasped and said, "Already! She' already getting a black eye!!!"
I could see the plastic burns (like a rug burn) that the slide gave her.
She looked like the Hutch back of Notre Dame with her eye barely open.
As we left the park (she was still crying at this point) she said, "No fall down! No fall down!"
Ya, Taryn. I hope you don't fall down anymore
It got worse as the days went on.
A week later, you can still see the brusing.
Every now and then she will say, "Daddy! Owie- (pointing to her eye) Fall down and go bonk" retelling the story to us again and again and moving her hands in the motion of a slide. 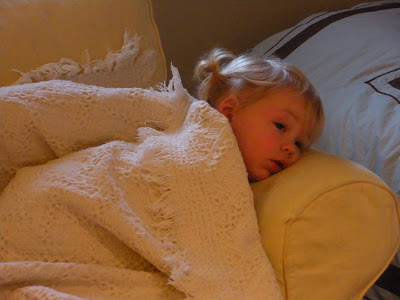 She spent the next hour lying on the couch watching Toy Story after we got home. 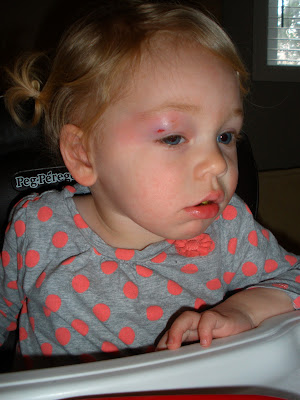 Just hours after, her eye was a big puff ball. Luckily, she didn't mind taking medicine to help with the pain.

Anyways. I'm just glad that she didn't let it bother her too much during the next week.

That same week we dealt with the 2nd worst diaper rash Taryn has ever had. It was HORRIBLE!
I am SO done with diapers. Now, I only need to convince Taryn that she's done with them too.
Posted by Brianna at 12:09 PM