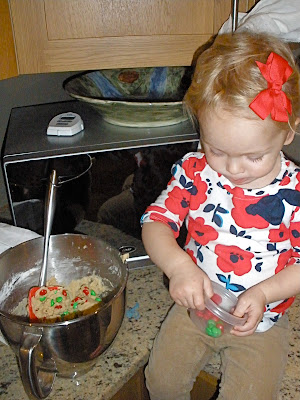 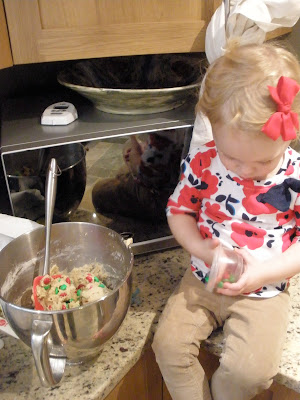 By 11 am this morning I was way beyond the "I'm gonna pull my hair out" moment. So far, in fact, that I considered giving myself a big mommy time out. But because life keeps moving forward, it wasn't an option.
So instead, I made cookie dough.
Taryn was my little helper and it was actually the only thing that took away those big crocodile tears for a couple of brief moments in time. I had tried painting, naps, coloring, games, playing with puff balls and ice trays, going outside, etc....
But then again, after a small handful of M&M's, what toddler wouldn't be happier sitting next to you helping you pour flour into a mixing bowl?
I had to keep reminding myself all morning long that she was overly tired and cranky because no one slept for more than 30 minutes at a time last night because Taryn kept waking up, unable to self soothe. My frustration appeared multiple times last night as I searched for her sippy cup, fumbled in the dark to fill it with milk and give it to my little one.
By 5 am I had given up on sleeping and put all my energy and frustration from lack of sleep into a good morning run. When I returned home at 7am I found Taryn and Tyson still fast asleep- the longest duration of sleep all night long and I wanted to freeze time. But soon the house was buzzing with our normal morning routine, and thankfully, Taryn woke up as happy as can be (only to last a wee bit of time)
I think the only way I am still standing right now is because of a great thing called endorphins. 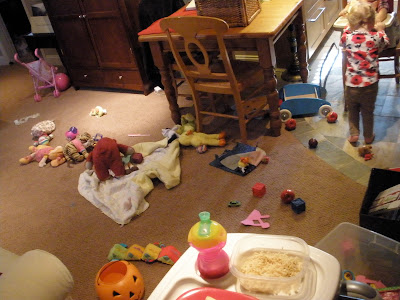 So even after the crying and even though my little apartment looked like this all morning long, I had found that 5 minutes of peace in making two batches of different cookie doughs all to be used during this busy weekend.
Posted by Unknown at 1:12 PM