Splashing at the Splash Pad 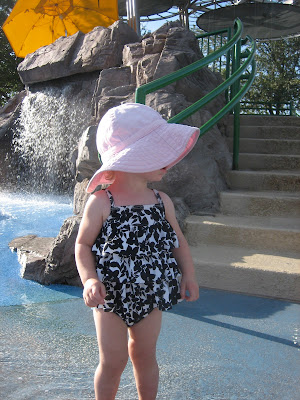 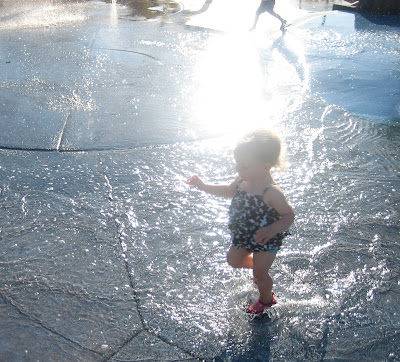 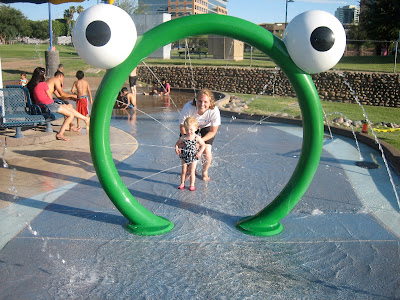 We took Taryn to the Tempe Beach Park Splash park yesterday and I thought it was awesome! I wanted Taryn to just go wild and run in and out of the water, but it took her a bit to warm up (and maybe a lot of splashing from Mom and Dad) but by the end she was kicking, splashing, and even trying to drink the water everywhere.  This is the biggest splash pad I have ever seen and the best part about it is that it's FREE!
Because we were in Tempe (and love it so) we headed to the World Market in the Tempe Marketplace for a special search. Bon Bons. The same kind that were sold by French clubs at Tyson's high school. They brought back floods of memories for him and even though when I hear Bon Bons I think chocolate, these strawberry or apple chewy candies were delicious!

It's amazing how much Taryn is on the go and growing. She turned to Tyson last night as we were reading books before bedtime and said, "I don't want this." So we switched the book we were reading. Speaking sentences! She is trying new words and putting those words together and forming simple sentences.  She is getting so big! We know what she wants because she can tell us which is great!

We left Taryn in Nursery on Sunday because she was 17 months old- to the date- time to start warming her up to the idea of being in a church class without mom or dad. She ran right in, stopping to stare at our 3 year old neighbor she knows and then bee-lined for the toys. I stuck to the door, not wanting to take a step forward- giving her space. She looked back at me once when she pointed to a toy she wanted to play with but then quickly became enthralled with the other toddlers and toys. I asked the Nursery leader if she wanted me to stay (being Taryn's first time) but she said she would find if if she needed me. Having been a nursery leader I don't like when parents stick around. I prefer to have the parents leave, even if their kids are crying. It's better for the child and for the nursery as a whole. I was happy to sneak back out knowing that Taryn has had so much exposure in Italy to Nursery and knowing that she would love it. And that was it. Our little girl is no longer a little girl. Tyson and I got to enjoy Sunday school together for the first time in years because I was a teacher in Tempe, then he was a teacher in Italy, then I was in nursery in Italy. It was really really nice.
I love Nursery!