Take me out to the ball game - to give blood for free tickets! 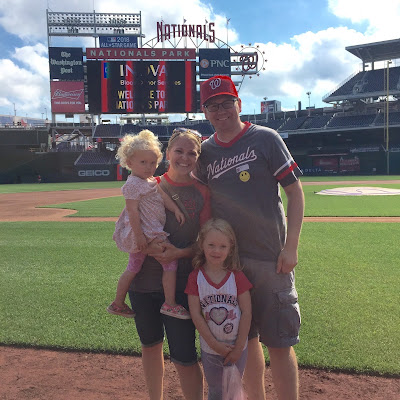 A few months ago Tyson and I signed up to give blood at the Nationals baseball stadium. Tyson has done it many times before but it was a first for me. We took the girls along on our early morning adventure and had a lot of fun! This is my new favorite family photo :) 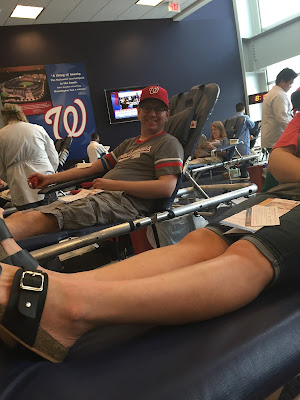 Taryn took a picture of Tyson and I giving blood. It totally worked out that we got to sit next to each other. I was surprised because the place was busy and full! We split up the girls to make it easier for us as a whole but the girls got to sit together anyway and play on our phones (to many sharp pokey needles sticking into people around us to play around) They sat ever so patiently waiting for us to get done. I beat Tyson in giving blood. I know, so silly! But he made it a race and stated that his blood flows really fast so he knew he would win - haha! 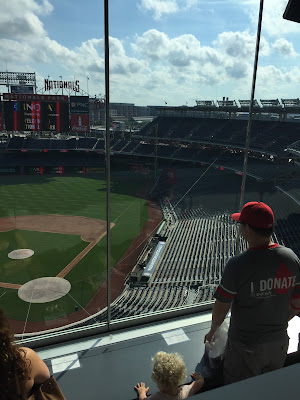 After giving blood Tyson looked super pale and he said he felt light headed and had to rest for a bit. I took the girls into the snack room and we got extra juice for Daddy and some cookies to help him. Within a few minutes he was better again and we were off on our Nats Stadium tour. It was so much cool to see the press box, walk onto the field (well the grass was off limits but we were on the dirt rim) and learn about the quirks of the stadium.

After giving blood at the Nats Stadium, you get a Nats shirt and two baseball game tickets per person. We asked if there were four seats together and we totally lucked out! We got the to have four tickets for the same day!

After we decided to eat breakfast at Market Lunch at Eastern Market because we were in D.C. soon early and thought this might never happen again. Market Lunch is known for the fantastic breakfasts (blueberry buttermilk pancakes!) and their fish (crab eggs benedict) I mean, it was all soooooo good!!
We had tried to eat there once before when Tyson's mom came from Arizona to visit when Haddie was born but the line is always a 30-40 minute wait. It's worth it if you don't have a plane to catch like Janis did. We were happy we had the time to do it that day. The girls also love running around the Eastern Market open foyer with lots of other kids. It takes the "boring" out of waiting. Plus there is the awesome open air market with fresh fruit and home goods. That's always fun to look around.

After we few weeks of waiting, we finally got to cash in our free tickets! As a family, we dressed in our Nats attire and prepared for the game that was on the hottest weekend of the Summer! I prepared with hand held spray fans for the girls. I knew the key to us enjoying our time was keeping the girls entertained and cool, and the fans did both. I'm thankful the game started at 7pm so at least when we arrived, it had started to cool off a bit. 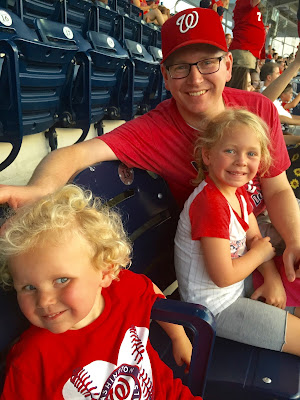 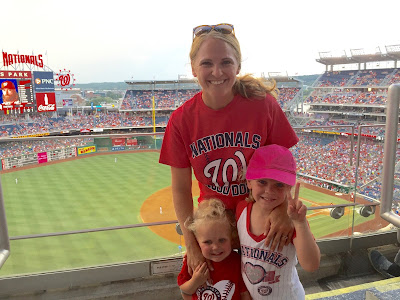 Tyson and I wore our matching "Nationals Blood Donor" shirts! 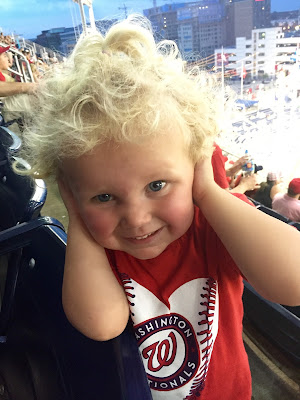 Haddie and Taryn covered their ears each time the crowd cheered. They both said it was too loud :)
They also liked to dance to the music each time they played the little snippets. Taryn really really wanted to be on the jumbo screen so she danced her little heart out. I will be putting a video of her on our YouTube channel, hopefully soon!

The girls made it to the top of the 9th which surprised us, especially in the crazy heat! We promised them time to play at the Nats playground which they loved, then we headed home minutes before the game ended, beating the rush of people on the Metro.
The ride home, Taryn was super goofy and we laughed a lot. A man behind us commented to his wife saying, "When was the last time you laughed that hard? It's contagious!" Taryn is our silly happy girl, always up for a laugh :) 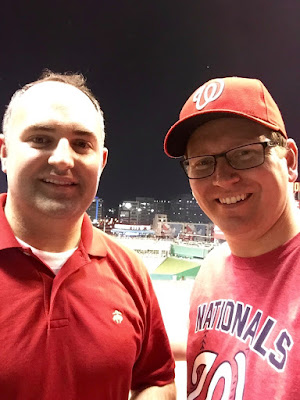 Tyson also had an opportunity to go with some guy friends to a Nats game just a week before we went as a family. The picture is with Brad Glenn, who recently moved with his cute family to Boston. We're super sad about it! 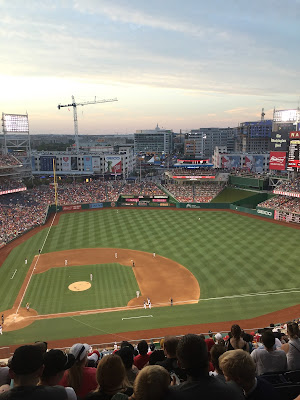 For mine and Haddie's first Nat's game, it was a success! Taryn and Tyson are always coming back of more, as Nat's veterans. We're excited to go again (for free again!!!) in a few months. The benefits of donating blood and saving lives :)