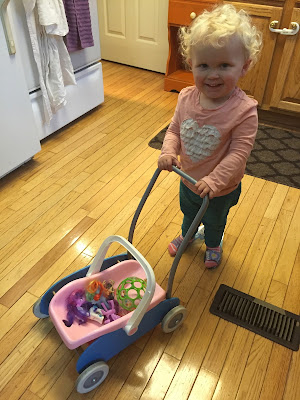 I took this photo the night before she turned 2. She was roaming around the house with her wagon full of special toys, talking to them. I just got caught up in watching her play and thinking about how fast these two years have gone by. I love her princess shoes that she insists on wearing too. They make the most adorable little clinking sound while she walks around. 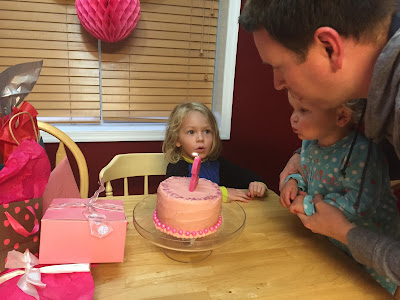 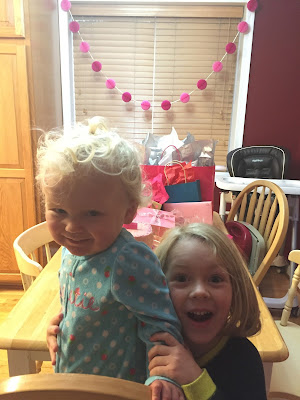 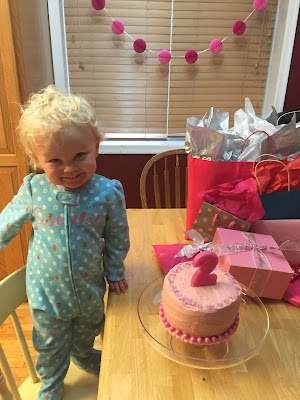 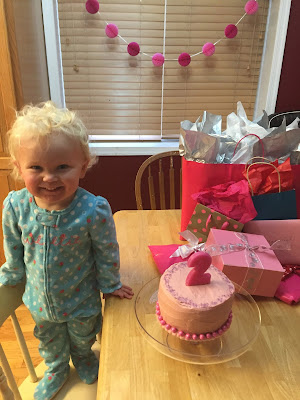 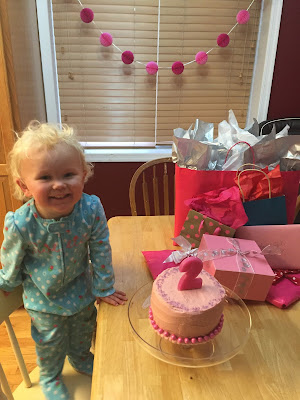 She is already a natural in front of the camera. Haddie just loves to smile! 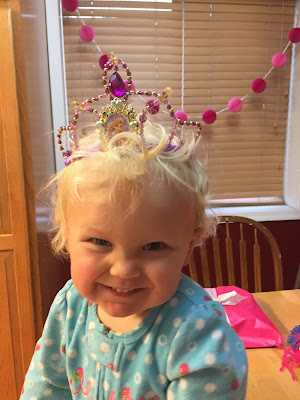 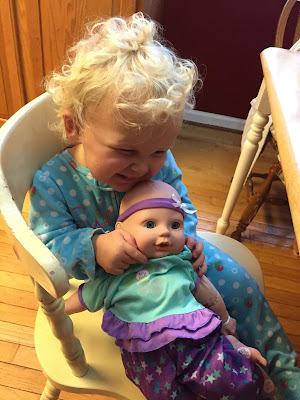 Every time we went to Target, Haddie would ask to hold this baby while shopping. She was always really good about saying goodbye to the baby at the end of our shopping trip (seriously- our girls are amazing and being able to understand that they can't have every toy and saying good bye to them at the store!) We knew she LOVED this baby! Grandma Smith came to town after being in Albania and with just a few days before Haddie's birthday, she asked if she could give this baby to Haddie. So thanks Grandma!! She was super happy to have this new little baby to take care of. The baby can be fed with a bottle and makes a sucking nose, snores, crys and giggles. It's pretty terrific! 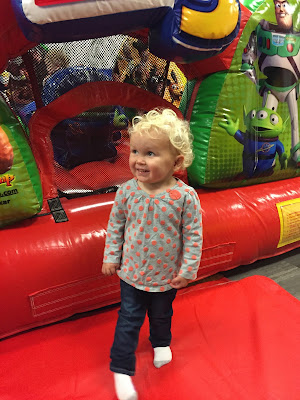 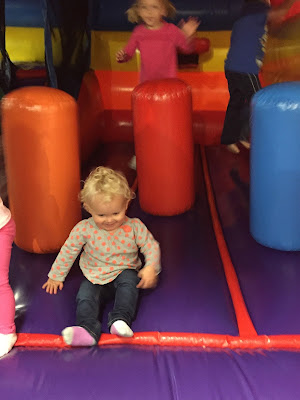 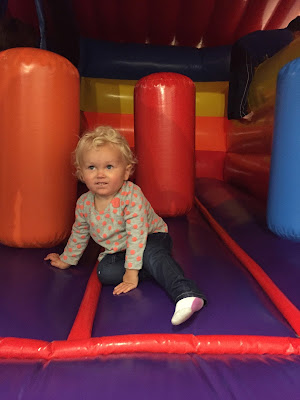 We took Haddie to a bounce house because it was pouring rain for days so we thought it would be a great indoor activity. Both of the girls loved it.  We were on the look out for Hurricane Joaquin but luckily it headed back out to sea so we could relax bit more but we still had to make it through all the rain.  There have only been a few times in my life where I have experienced constant rain or drizzle rain for days. And I still don't like it! 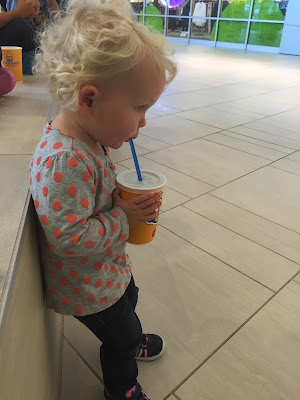 We got some Auntie Ann's lemonade and then all of a sudden my 2 year old look like she was 10 years old! 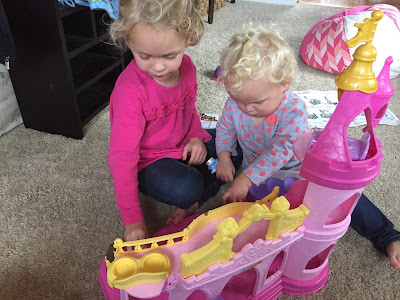 Grandma Jackie and Grandpa Scott sent this "Little people" castle and it occupied the girls for all 8 hours of General Conference that weekend. It was amazing that there was hardly a fight between the two. I have to get a picture of the baby doll Grandma and Grandpa Smith gave to Hadleigh. The baby cries, laughs, and talks baby talk. You can even feed the baby a bottle and the mouth motions in a sucking way. It's incredible and Hadleigh is in love with it. She loves her baby dolls,  constantly informing us that "Baby sleeping- shh!" or "Baby wake!" (baby awake)


Hadleigh woke up last Saturday morning, the day of her 2nd birthday, and was beaming the second we started singing "Happy Birthday." I know that some shy away from attention and for whatever reason, the terrifying birthday song, but Hadleigh was as happy as could be. She immediately tried to blow out her candle when Tyson placed her down at the table after hang retrieved her from her crib. All she wanted was to eat the cake. All big sister wanted was to "help" (or take over completely!) Hadleigh open her presents. Taryn really was a great help, after lots of little talks about making sure to ask if Hadleigh wanted the help etc…

Hadleigh is all girl all the time. She loves pink, dresses, fairies, My Little Ponies (just like Taryn) and singing in the car. Her new favorite phrases are, "Wah you doing, Mama?", "Haddie do it" or "Wah happen Mama?" and "Where Ganpa go?" (grandpa) She LOVES nursery…like…she doesn't even want to miss a second of it! Changing a poopy diaper of hers to difficult because she doesn't want to leave her beloved snacks "ceweal" (cereal) and "raisin" but with lots of coaxing and a promise of a quick return, it somehow gets done.

Hadleigh is a little ray of sunshine every where she goes. She has so much life and charisma in her little body. She will bring a smile to anyone around with her silly smiles, goofy faces, and exaggerated expressions. Hadleigh will follow Taryn to a "T." Anything and everything her big sister does, she has to do. From swinging on the big kid swing to trying to put on her own shoes, she wants to do and say everything her big sister does. It warms my heart how much Hadleigh looks up to Taryn. I have so many tender pictures of Hadleigh watching her big sister and trying to mimic her. They are growing a beautiful relationship together.

My favorite moments are when we go to pick Taryn up from preschool and Hadleigh embraces Taryn with the biggest hug, as if they haven't seen each other for years! She also has a mighty might scream that drives Tyson and I insane. Thankfully she doesn't use it all the time but I'm pretty sure that when she does, any dog in the whole world can hear it!

Her favorite book is "All Fall Down" which she can recite (more of sing) to you
Favorite song: "The Prophet Song", "No more monkeys  jumping on the bed (acted out as well- of course!)"
Favorite food: Mac and Cheese- any form of it.
Favorite toy: Her special baby and My Little Pony figurings 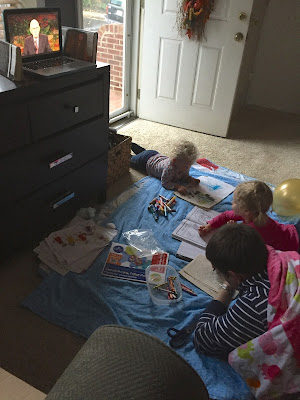 We love our little Hadleigh and all she brings to our family! Happy 2nd birthday sweet girl!
Posted by Brianna at 8:05 PM