She's going to be a soccer player :) 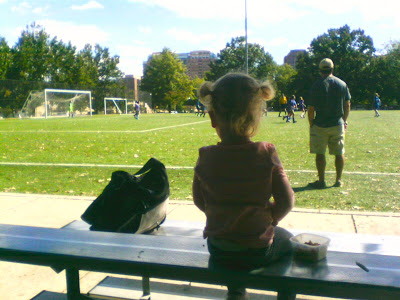 Saturday was a special day for Taryn and Tyson.
They spent the morning together- just the two of them- doing what Taryn loves most. They visited the library and built the world's tallest block tower ;) then they played forever at the park together. Tyson wanted to show Taryn what soccer was all about so they headed to the fields next door to the park. Taryn was ecstatic about soccer!!!
She kept asking Tyson who the people were- the goalie, the coach, the players etc...She was jumping up and down with excitement every time the ball was kicked or the whistle blown. When Tyson asked Taryn if she wanted to play soccer when she's older she said, "YES!"
They sat and watched the games being played for a good long while. As they left the field, Taryn asked Tyson to "Wait!" as she stopped behind the goal net to continue watching all the action. Love at first sight for sure. 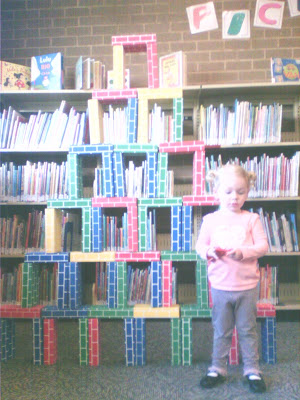 Taryn could spend all day at the library reading different books and playing with the toys (especially the little stuffed beagle dog.)
Posted by Brianna at 12:50 PM