Feeding the Ducks in Alexandria 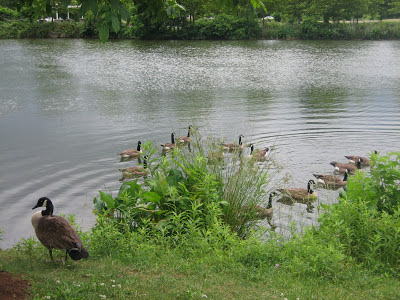 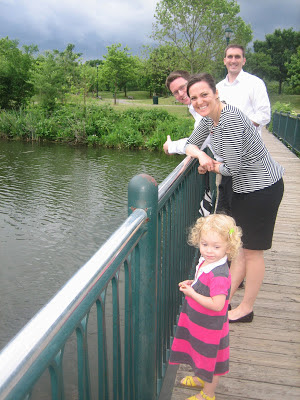 My sister & brother-in-law had us over for dessert on Sunday night. They had just discovered this great park near their apartment and took us their so Taryn could feed the ducks, turtles, and fishes. The canadian geese were so happy to be fed (even though some decided to hiss at us while we were walking to the bridge) and the turtles were swimming and climbing on each other so they could get the food. Some geese even started walking on the turtles shells close to the surface of the water so they could have the first grab at the bread.

Notice the dark, rain heavy clouds in the background?

After we finished off our bag of old bread, the clouds opened up and dumped a bucket of never ending water on us. We were soaked so quickly. Tyson and I both thought back to our time living in Arizona during the monsoon season. There, the rain comes quickly and in LARGE amounts, drenching everything in sight and leaving the biggest puddles you have ever seen. I remember going for a run in August around 5pm years ago and within 10 seconds of the rain starting, I was completely soaked to the bone. Same thing happened here on Sunday.
Taryn held on for dear life as my sister and I tried to keep her under the "family of four" sized umbrella. The boys were totally soaked and finally gave up trying to stay under the umbrella. Instead they made a run for the car. 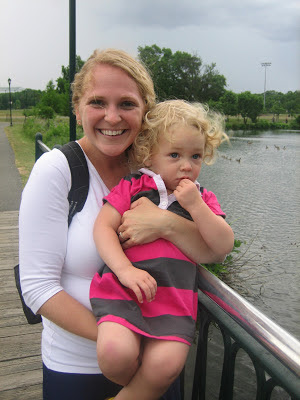 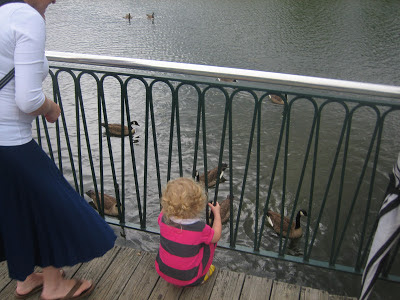 We were laughing. We were soaked. And Taryn sat in her car seat saying,
"Mommy, I wet."
Over and over again.
It was hilarious and it took two days for my Rainbow sandals to dry out.
We borrowed clothes from Brittany & Seth to get out of our sticky wet ones. Taryn ran around in just a diaper, completely happy, talking about how the rain came and she got wet.
Having warm pizookies with ice cream was the best way to end our Sunday night adventures together.
Posted by Brianna at 6:46 PM