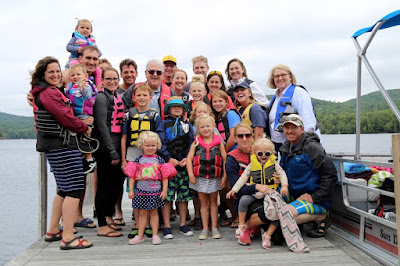 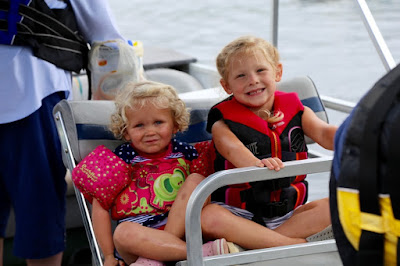 We loaded up 8 sail boats with couples and kids, with the littles on the platoon boat with Grandma and Grandpa and lunch!

We got a quick lesson on sailing and then off we went. Tyson and I had no idea what we were doing. Neither of us have ever sailed before and it was hard! And a bit scary because our sail boats were tiny, in my opinion. But apparently for sail boats they are the perfect size?! I like my water vessels to be large, further away from the water for me! :) 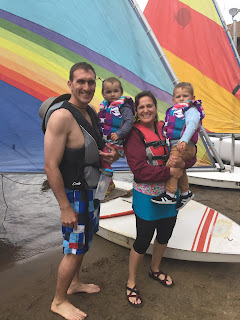 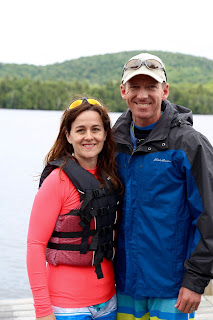 Cameron and Jana were expert sailors. Cameron has sailed before and zigged and zagged like a professional. He beat us all to the little island we were going to for lunch. 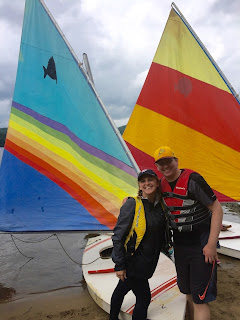 How did we do? Well, by the time we got to the first point in our journey (about 10 minutes away from the docks we had just left) we took a hard turn and capsized. Did I mention that Taryn was on board too? Well that icy Blue Mountain Lake water shocked all of us to the core. My first instinct as we were flipping out of the boat was to grab Taryn. I had her by the life jacket when we hit the water. As I came up out of the water, I realized I was caught under the sail and I panicked not knowing where Taryn was. Thankfully, grabbing her somehow forced her out of the sail's path and she was already out from under the water and gasping for breathe in the cold water when I hit the surface. It took a minute to calm her frantic screams. I held her tight and told her I would never let her go and she was safe. I teared up at this point realizing that I was her mother, the only person (besides Tyson) who could calm her down and reassure her in a moment of crisis. That weight of motherhood rested in my heart and I knew it was a privilege.

Tyson tried to flip the sail boat over by we had no idea how to properly. Thankfully, one of the sail boat guides was on a motor boat and zipped to us within a few minutes. Taryn had calmed down (and warmed up because she told us she had peed in the water - hahah!) The guide told us how to flip the sail boat over and we climbed back in, sans Taryn. She was TOTALLY over sailboating and asked to go back with Grandma and Grandpa. The guide hoisted her in the little motor boat and happily took Taryn to the platoon boat that was puttering around the lake. 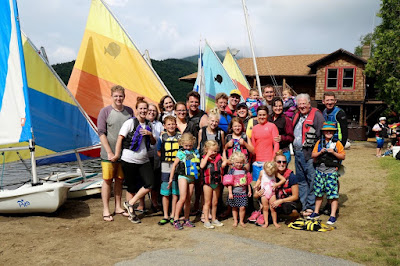 It was a fantastic experience to sail as a family on that lake.  Everyone worked together with their boat mates to make sure we made it to and from that little island. Tyson and I said it was the best marriage counseling lesson ever ;) But seriously, we were challenged to communicate almost non stop so that one of us wouldn't get whacked in the head with the aluminum sail, tip the boat from moving the rutter to far, and our personal weight balance. It was really hard on the first trip to the little island. I remember audibly declaring that we (Tyson and I ) needed to remember to communicate and be patient several times, mustering up all the calm I could in my voice to try and bring peace to the stressful situation. Tyson and I declared we didn't care for sailing because we couldn't get a hang of it.

But we learned a big lesson.

On the little island as we sat and ate the most delicious hot sandwiches my mom had so carefully and thoughtfully prepared.Tyson discussed with my brother Cameron some tips about sailing as we all at. Tyson ran to me declaring he had figured out what we were doing wrong, thanks to one specific tip from Cameron. We set sail again in much better shape than before. We were really flying down the lake! We changed our attitudes about sailing and really started to enjoy ourselves, partly because we weren't in constant fear of capsizing again.

It takes communication, persistence, good attitudes and a willingness to learn in order for you to succeed at anything. So many parallels to the Gospel, if you ask me. 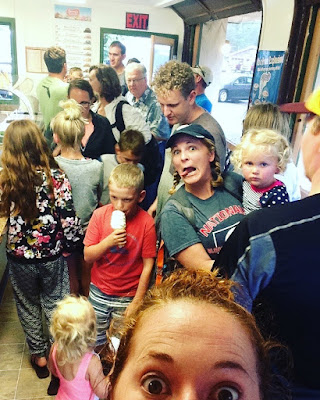 After a great day of sailing, we headed back to our cabins, passing this teary tiny ice cream stand. It was pouring rain but we pulled over, all 3 cars- 2 extended vans and an Explorer. We filled the rock parking lot and debated on whether or not we should go out in the ran to get ice cream, after being cold from the lake and our drive home. Eventually we all just ran in and completely overwhelmed  the little ice-cream shop. 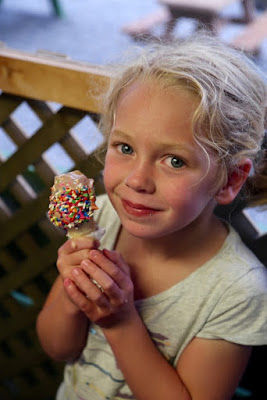 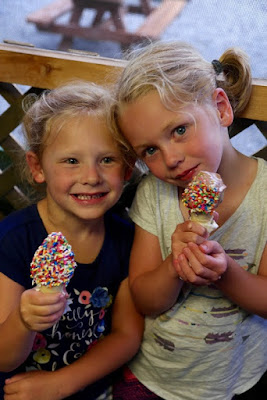 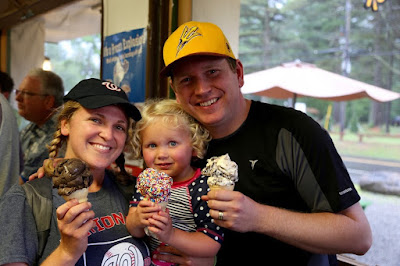 Seriously yummy ice cream! Haddie ended up loving my dark chocolate ice cream more so we swapped because her's was so good too! 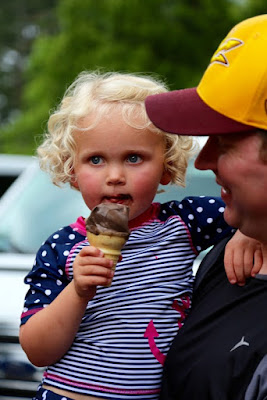 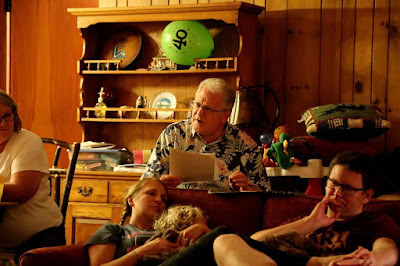 That night back at the cabin, we had a surprise party for Brooke who had recently turned 23 years old and graduated college and Cameron who had turned 40 years old. Megan put on a great party and had lots of photos printed up of Brooke and Cameron to string about the cabin. 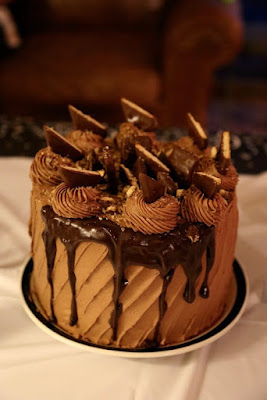 I made a S'mores cake to celebrate that night. 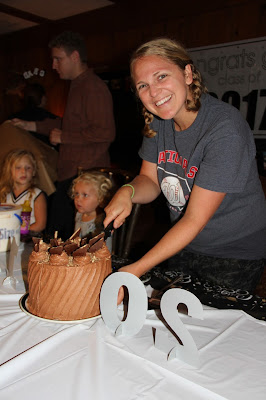 As you can see from the picture above, Haddie had worn herself out and crashed on the couch, snuggling with me. My Dad pulled out a talk he had recently been asked to give in church about   "raising children who enjoy working hard." When given this topic a month prior, my Dad had asked for our examples of how he had taught us how to work.
He told of Ashleigh working hard in the yard on a Saturday and painting our giant white wall (something I remember well- it was a HUGE WALL!) My Dad turned to Ashleigh and said, "Have you learned anything from all this hard work in the yard etc..." Ashleigh replied "Yes. When I can afford it, I'm hiring gardeners." Haha! But my Dad also included that Ashleigh mowed her own lawn, having learned from Dad how to do so, up until she had 3 children! Now she has gardeners. :)

I recounted stories of how Dad taught us to properly plant flowers and take care of a yard. Now I take pride in every flower and plant I'm able to grow!
Cameron told of how he learned to properly clean a car from the inside out. It was our Saturday chore every few weeks to wash and clean out the car. My Dad would come back out to inspect the car, but would  send you back to work if he found a paper wrapper from a fast food cup. Dad wanted the job to be done right.

His talk, like always, was so beautifully recited and planned. My Dad has a gift of public speaking. His stories and principles draw out real emotions and the phrasing is so well done that many of my siblings (me included) have asked for copies of the talks he has done- which he keeps in a giant binder. But what stood out to me the most, was that my Dad did not say these words to be boastful. He was saying them as a way of teaching how important hard work is for children.
Many people from the ward said they were impressed how my Dad could deliver such a message without being prideful. He's been asked to give this talk in several wards since.

It was a great day and was finished off with one of the many fantastic talks my father has given.