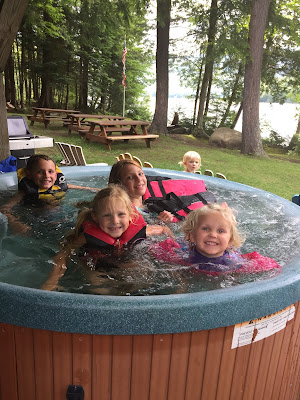 Is there anything better than getting together with family?!
Our girls have been looking forward to this trip in the Adirondacks for months! 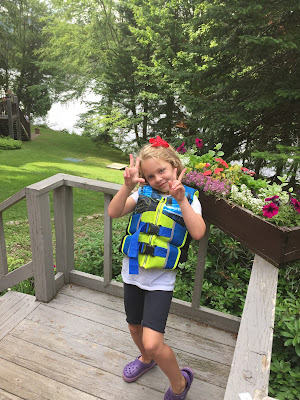 Love that girl and all her spunk!
We arrived on Monday and members of my family continued to trickle in as the day went on. The kids took this time to explore the cabin site, the water, running around playing with each other and enjoying life. 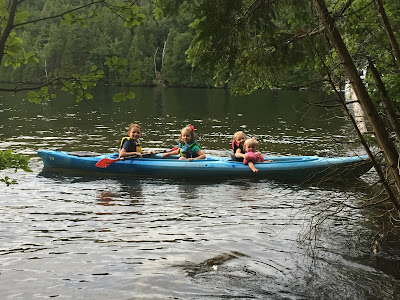 The kayaks were an instant hit for the kids (and adults!) The kids couldn't wait to get out in them together. I'm thankful that Merrick is so strong because he was able to keep all those kiddos close by but yet give them the sense of being on the water, without all the parents worrying about them drifting across Lake Placid.
They all had a blast. 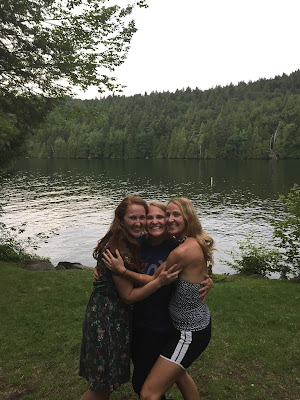 Reunited with Brooke and Kenzie. Kenzie just returned from Singapore with her little family, where they had lived for a year. Sadly Ben wasn't able to leave his work there and make it back for the reunion but we were happy to have Margot and Kenzie there to represent their little family. 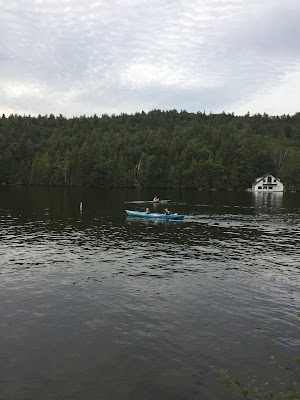 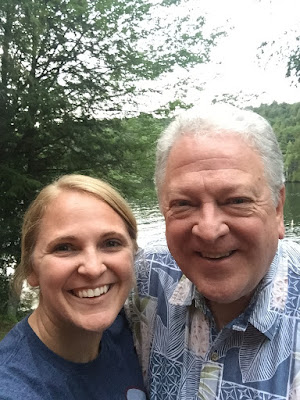 Love my Dad and that he lives for adventures. He's taught me to be brave, explore, try something new, and expand my horizons. I love that about him so much. It makes me grateful that Tyson loves to adventure so much too, because it makes planning our life together so much easier.
Also, I have my Dad's nose! :) 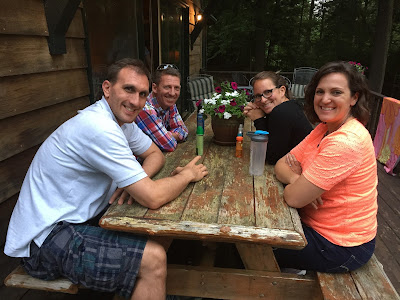 What I love about reunions is the conversations. Cameron, Jana, Brittany and Seth chatted away and there were moments where this table was filled with all sorts of family mixes. I love that so much. Reunions are a great time to ask the in depth questions about what is going on with each other. Because sometimes talking for hours over the phone doesn't do "FaceTime" justice. 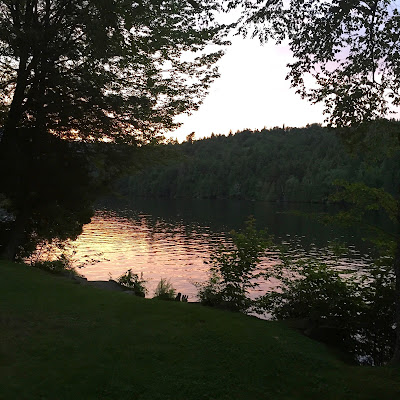 Seriously, this place was out of a magazine! It was so rich in color, the weather was great (even when it rained on and off for a few days) and it was so peaceful 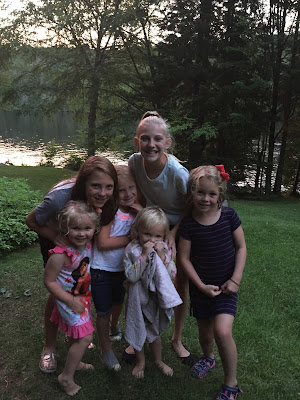 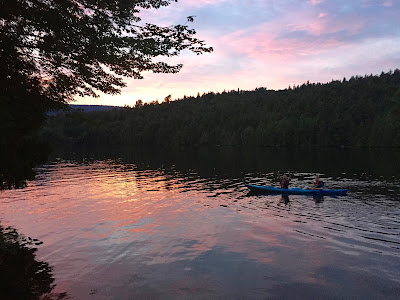 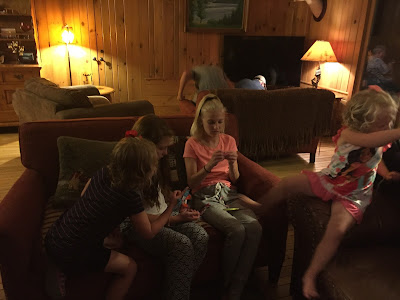 At night when the sun had set, the kids would play games, make duck tape purses and wallets and run around together. Getting the kids in bed at night was always hard. No one wanted the fun to stop! 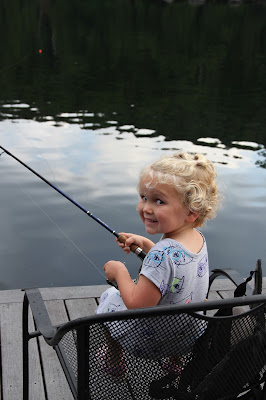 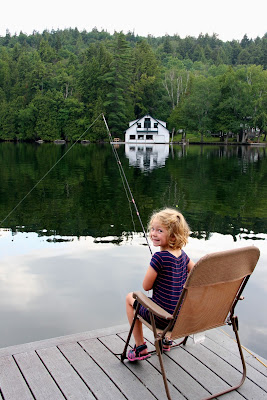 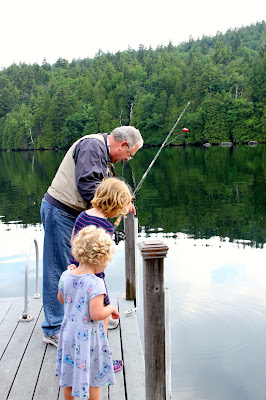 Taryn was ready to walk up bright and early to meet Grandpa on the dock to get the best fishing possible. 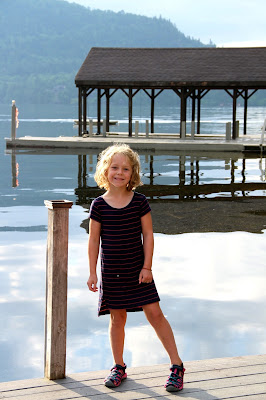 She was anxious and ready to learn! 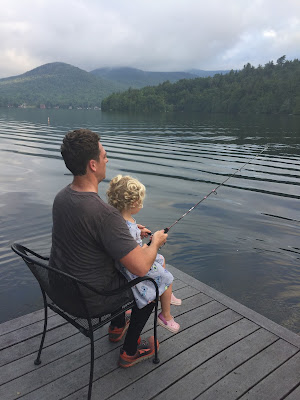 Uncle Tyson and Uncle Cameron were there to help and give great pointers too! 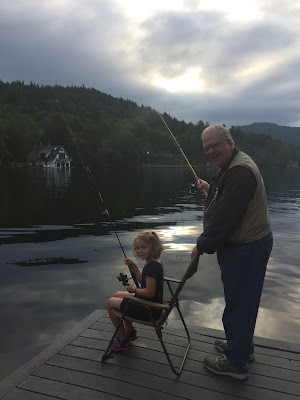 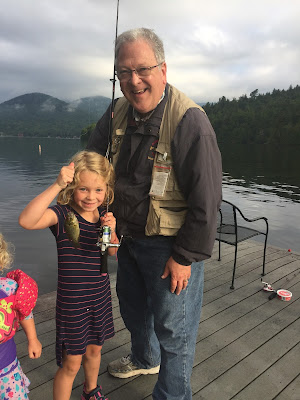 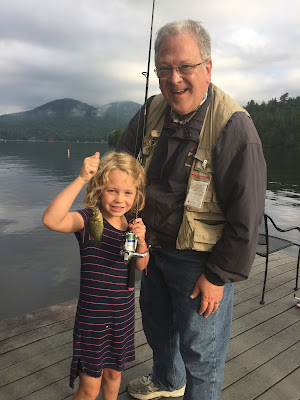 This is the reward you get for listening to the best fishing instructor!
Taryn's first fish! Thanks Grandpa Scott! 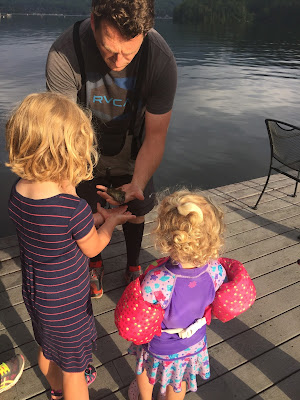 Taryn tried holding the fish and Haddie gave it a pat above the gills. 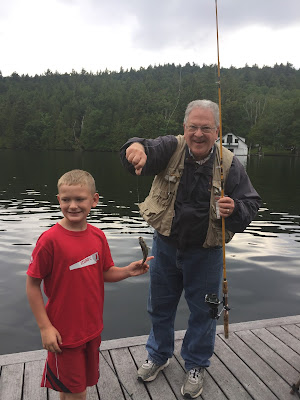 Grandpa helped Jacob catch a fish and many other grandchildren throughout the trip.
My favorite thing about my dad and fishing is that he gets the love for the sport from his Dad, my Grandpa Scott. That vest my Dad is wearing belonged to my Grandpa Scott, and so did much of the fishing gear my Dad still uses today. 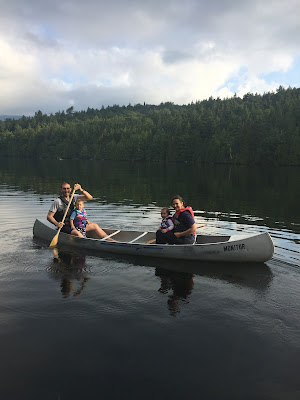 The best time to be in the water was.... well...anytime of day really. It was such great lake. But the morning waters were especially calm in the mornings.
Seth, Brittany, Cora and Braden took to the water in the morning while most of us watched from the dock and fished.

We had the whole 2nd day to be at the cabin, enjoying everything around us. Some people call it a day to "adjust" but I'll just call it a day of "fun!"