Although this will be a shorter story, it is still very note worthy.
The First Day of our Trip- Getting to Cody, Wyoming. (because I already mentioned what we did when we finally got there!) 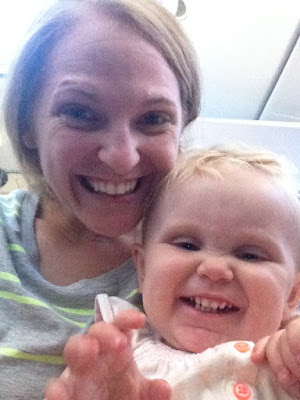 On the first airplane, before all the yucky stuff.

We got on our first flight at 4pm Friday the 19th of June. Our first flight was 4 hours long and we were totally prepared, we thought. We had snacks, games, phones charged to play with, dvd player, special little new toys etc…. Tyson and I sat across the aisle from each other, each of us having one girl seated next to us.

We were doing great.
The girls kinda slept for most of the flight and played well for the other half. Towards the end, it was a really turbulent ride and I was feeling sick. That's the down side of traveling for me because I am getting progressively worse when it comes to getting car, air, or motion sickness. So because I have thrown up in the past, I gave Hadleigh to Tyson while we landed and I tried to focus on not loosing it. We landed and I thought I was in the clear, which, I guess I was. But Tyson was not.
Hadleigh threw up all over Tyson and it was nasty!!! 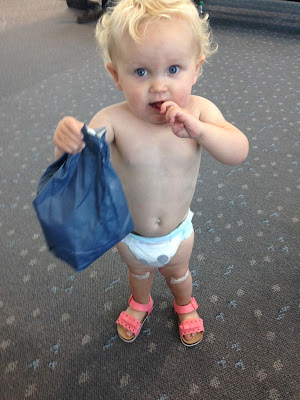 Before our second flight and a change of newly purchased clothes, Hadleigh posed with her throw up bag filled with gross clothes we ended up throwing away (good thing it was all 2n -3rd hand)

Tyson does not do well with throw up at all. Really, it's right up there with spiders for him. So this really was the worst case scenario. Thankfully I had thought we might need an extra costco sized bag of wipes (seriously! Yes- I went with the prompting though it's super heavy) and I am SOOOO glad I did. The only thing we didn't pack was an extra change of clothes for everyone. Each flight in the past, we have always packed an  extra change of clothes for each of us in our carry ons, just in case our bags get lost. But packing for this trip was SUPER last minute and Tys and I decided to ditch the extra carry on clothes because we have never used them in the past. 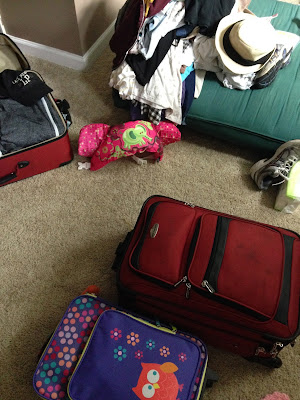 Packing the day off. Super stressful.

Anyways- we got off the plane and I sent Tyson looking for new clothes to change into because he smelled so bad and Hadleigh was already stripped down to her diaper. Apparently no one sells shorts, just shirts, so Hadleigh had a shirt dress and Tyson bought a matching Denver shirt for himself. Still half stinky, Tyson rode the next flight. It nearly killed him to be in stinky clothes that long. He is a VERY VERY clean person especially when it comes to clothes. He said he could only smell throw up the whole time. Ugh. We had about 5 throw up bags ready the whole 2nd flight.

We landed in Cody, Wyoming stinky and tired. Then straight to pictures right after (no change of clothes for us!) It was a LONG day!!!!