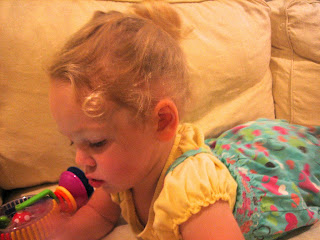 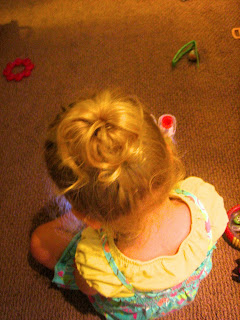 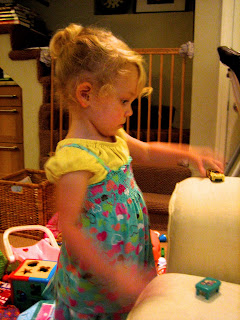 I have a picture from when I was around 3 or 4 where I look exactly like Taryn does in these pictures. It's pretty awesome to see so much resemblance and know that she is our little girl. Who would have known my first daughter and I would look so much alike.
I've been debating on whether to cut Taryn's hair or not for months now. I mean, she is almost 2 1/2 years old and has never seen the sight of hair cutting shears. At first I thought I was doing her a really cruel injustice, like she would look back on her photos as a child and say, "Really, mom? Why did you let my hair get so bad." But when I finally tried to put her hair in a pony tail (and she actually let me!) last week, I was so happy I never cut it.
Those curls! Making it seem as if her pony tail was actually in a bun! I only wish she would let me do her hair like this every day. It does make her appear to be at least 5 years old and I don't know if I am ready for that yet.
She's lucky that her hair and the humidity get along so well.
Posted by Brianna at 7:15 PM