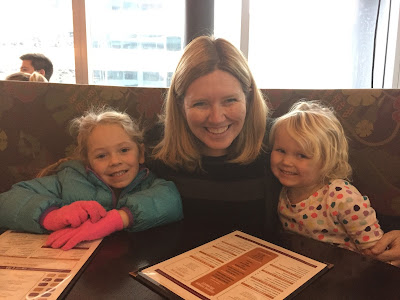 Janette and Ken came out to visit us as their Anniversary trip. We kept asking them, "Are you sure you want to spend your Anniversary with us??!!" We were so excited to have them stay with us and see lots around the D.C. metro area.
Our first stop after picking them up from their Saturday red eye flight- Founding Farmers. Ken had been told it was a great spot to eat at and suggested it. I was happy about that because it's been on my "To Eat" list since we moved here! It was delicious and a fun way to start our day. 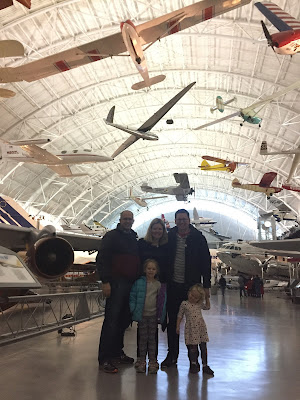 Our second stop was the Dulles Udvar Hazy Air and Space Museum. It was my family's first time and Janette's first time. Ken had visited with the Scout Jamboree he chaperoned. But it was all of our first time seeing the Space Shuttle. 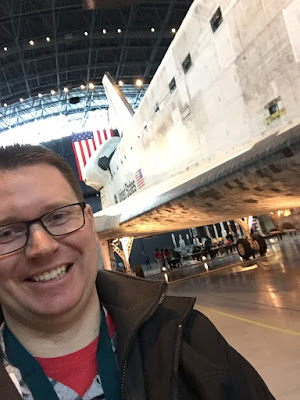 It looked pieced together to me, not like it would survive in space. But what do I know?!
It was gigantic and made me feel very small. 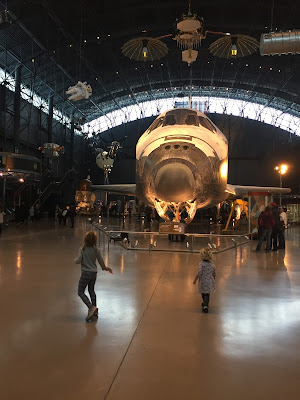 My babies looks so small!!! 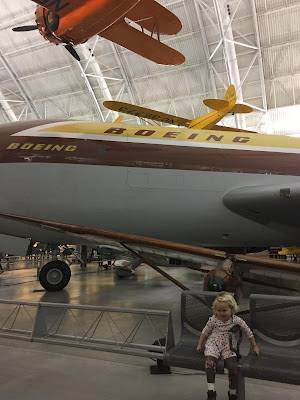 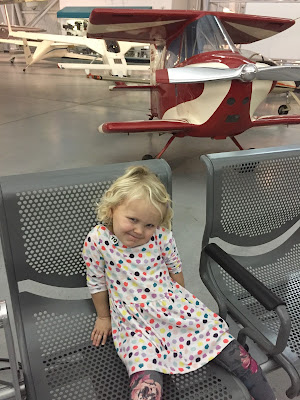 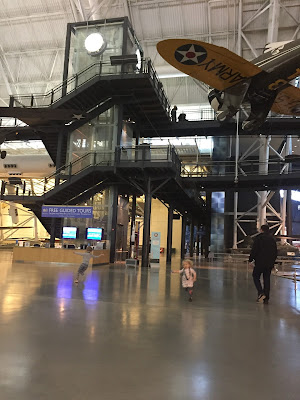 Janette found out about this program for visitors where you can learn to build your own airplane and test it in flight. We listened at several stations throughout the Museum about draft, lift, rudder, wings, propellers etc...Everyone built an airplane that was slightly different. Janette and Haleigh's airplanes survived the flight in the simulator!

The girls ran around the museum with their airplanes, making all the proper noises, with their participation medals (which were really cool!) around their necks.

After a great time at the "new" Air & Space museum, we headed home to rest just before we picked up our babysitter and left for our dinner reservation in Old Towne Alexandria. 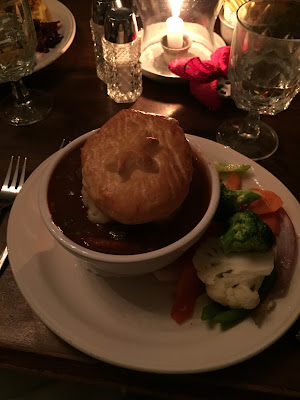 When Tyson's brother, Todd, came to D.C., he ate here and highly recommended it. We thought it would be a fun place to show Janette and Ken and for Tyson and me to try for the first time.
We were a bit under dressed but the colonial feel was so cool. Gadsby Tavern was where George Washington ate frequently, Thomas Jefferson has his Inauguration dinner, and several other Presidents and founding fathers ate. I ate "George Washington's Favorite," a dish with cranberry duck, duchess potatoes and some kind of cabbage I don't think I cared for. Tyson ate the Gentlemen's Pye (notice the old time spelling) complete with stew and Yorkshire Pudding.
Again, a yummy meal with great company!

Sunday was a great day - going to church and enjoying or restful day. We played lots of games throughout the long weekend and had some delicious food too. 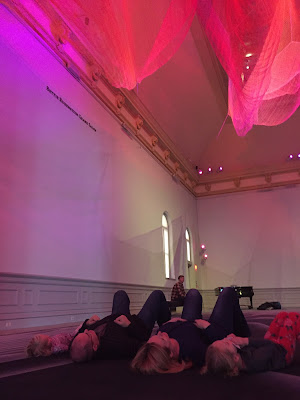 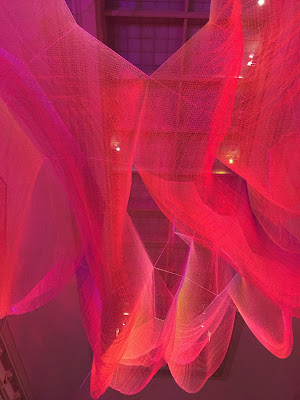 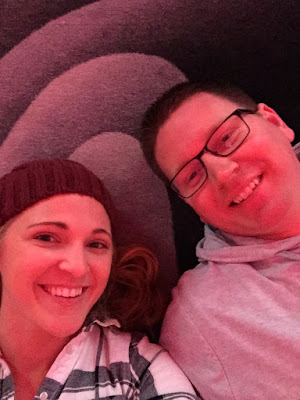 On Monday, Tyson took off work and we took Taryn out of school so we could go and see more with Janette and Ken. We took a tour of the Capitol, given by our friend Terry who works their. It was such a great tour and we learned a lot. I loved that two weeks later, The President & President Elect walked right where we had stood in the Capitol for Inauguration day.

After lunch at TAYLOR (so good!) we went to the Renwick gallery which a lot of fun. This Tsunami art installation is still one of my favorites. You lay on the ground to get the feeling of what a Tsunami looks like from the ocean floor. 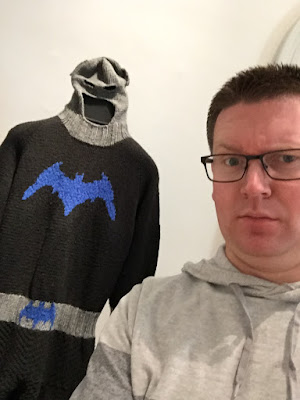 Then we visited the Hirrshorn Museum. I knew Janette liked Contemporary art so I thought this would be a win. Well, the museum shop was a total win! But the art displays had us either busting up laughing from awkwardness (who puts an old naked man spread eagle in front of the Elevator door!??!?!), running from naked bums with orchids in them ??? and language, and wondering "HUH??" throughout. It made for some good laughs! 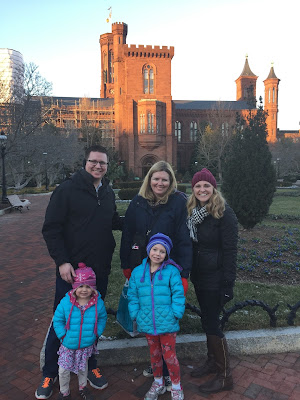 We saw some sights like the museum for the Qur'an

Did I mention that the temperature dropped into the 20's the whole time they were visiting, then shot back up to the 50's days after they left? It was SO COLD! It had also snowed the first day we had them here. I was pretty scared because our car doesn't handle the snow well at all. We differently had some scary moments (especially picking up and dropping off the babysitter with all the icy roads!!!) But everyone was a trooper. I was touched by a lady in D.C. who saw us walking around with the kids. She stopped us and offered us Hand Warmers. She said she carries extra ones around for those who look like they need them. When she saw our girls, she knew we could use them. Those hand warmers saved the girls! They loved playing with them in their pockets and it kept their little hands super warm. That lady was an angel! 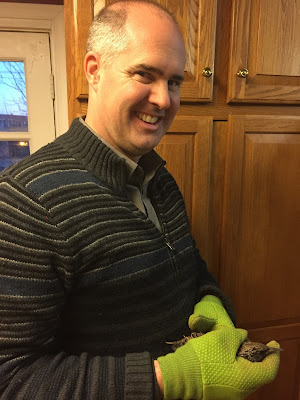 When we came home, Janette found a bird trapped inside our basement. We still have no idea how it got in but Ken was able to catch it (he makes it look easy!) and release it outside. I haven't found any bird poop in my basement or house- amazing! I think it's crazy that we can't figure out how it got in. 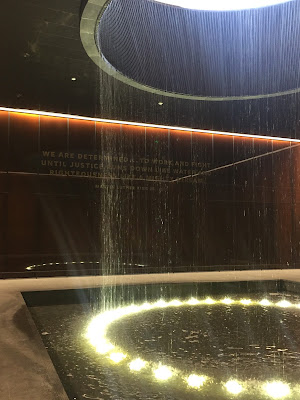 On Tuesday, Tyson went to work, Taryn went to school and Haddie was at preschool and playing with her friend Gwen. So I took Ken and Janette to the Engravings and Printing Bureau for a tour. After that, we tried our luck at the new African American History and Culture Museum. We got in as "Will Call" (Thanks to the freezing weather!) It was really interesting and I can't wait to visit again and again. What an incredible story this museum tells. Above is the beautiful waterfall in the museum with inspirational quotes all around.
We ate a great lunch at the museum cafeteria of collared greens, mac and cheese, fried chicken, white  gravy, spiced apples, sweet potato pie and more deliciously seasoned chicken. Great idea, Janette & Ken!

We headed back home to pack up and get Haddie so we could say goodbye at the airport.
We loved having Janette and Ken visit. We were definitely feeling the inch of needing to see family. We're thankful they took time for their Anniversary and spent it with us :)
Visitors are always welcome!