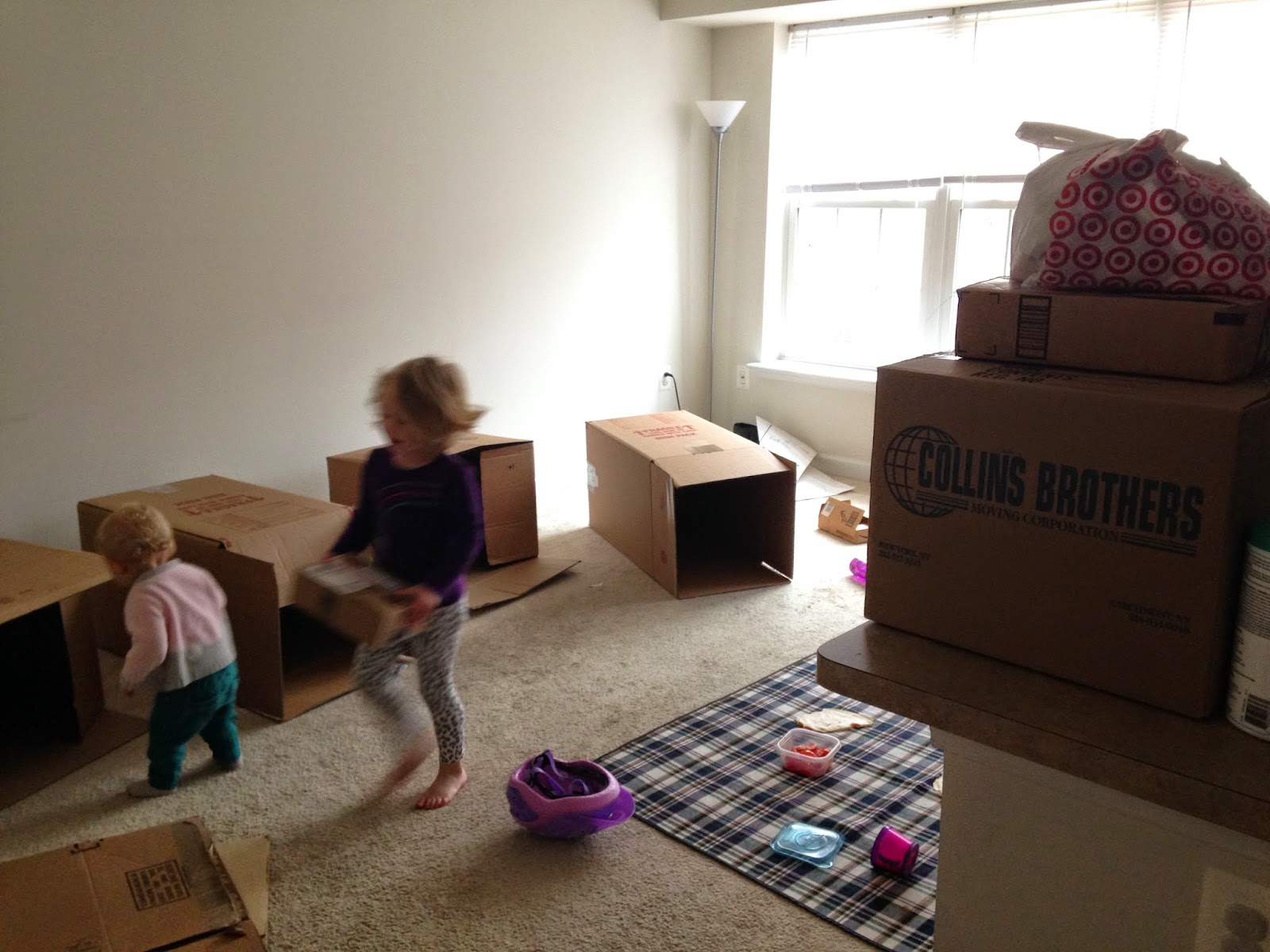 I built them a city out of boxes so I could get some cleaning/boxing down with the last items in our old apartment.

On the last Friday of March, I called my sister to ask what I could do to help her with her move that was the next day. She was moving back to Alexandria, just about 10 minutes away from me, and she being 23 weeks pregnant with twins I knew she would need to be kidnapped so she wouldn't be tempted to help out.

We got to talking and she asked about the new home we recently decided to move into. When I told her I had been making a few trips with finished boxes just with our car….and the two girls…she
1. thought I was nuts and
2. volunteered her moving truck and that we share the expenses the very next day. Tyson's Saturday course would take him away from 10am -6pm so it would be up to me to pack everything in the house in less than 24 hours, otherwise we would have to wait a few more weeks to move and it would have cost us more money with utilities and the truck rental- because no one out here owns a truck/trailer! Ya- I can see how others would think we were crazy. And yes- we are. But there were lots of reasons why we wanted to move in then and not later. Lots of them have to do with saving money, and lots of them have to do with our busy schedules, our landlord, and taking care of other business.

I had already booked up our Friday and couldn't budge anything around so the entire day while the girls and I were out running errands and making visits I thought, "How am I going to do this?!?!" Tyson and I have moved a lot so we know we need to be prepared when friends show up to help load the truck. I was far from that. That night at work I was so anxious and I didn't sleep very well after getting home either. Tyson was back at home taking his practice exam which takes a few hours then he was off to bed to rest for his all day class.

Besides having just a few boxes still packed from our last move, I started boxing up everything in the house starting at 9am Saturday morning and taking down our bed and Hadleigh's crib. I was told the truck would be at my place and ready to load at 3pm. So in 6 hours, I had boxed up ALMOST the entered house with both girls at home with me (they were angels!!!!) Once the truck arrived, I was busy moving everything from our apartment to the truck along with the help of my brother-in-law and some very good friends willingly to jump in and help us VERY last minute. It was also frigid cold that day- of course- one of the last winter days we had. But it had to be done! My sister, being pregnant, jumped in to help watch the girls in our kitchen and at the same time, threw almost all of my kitchen into boxes as well. 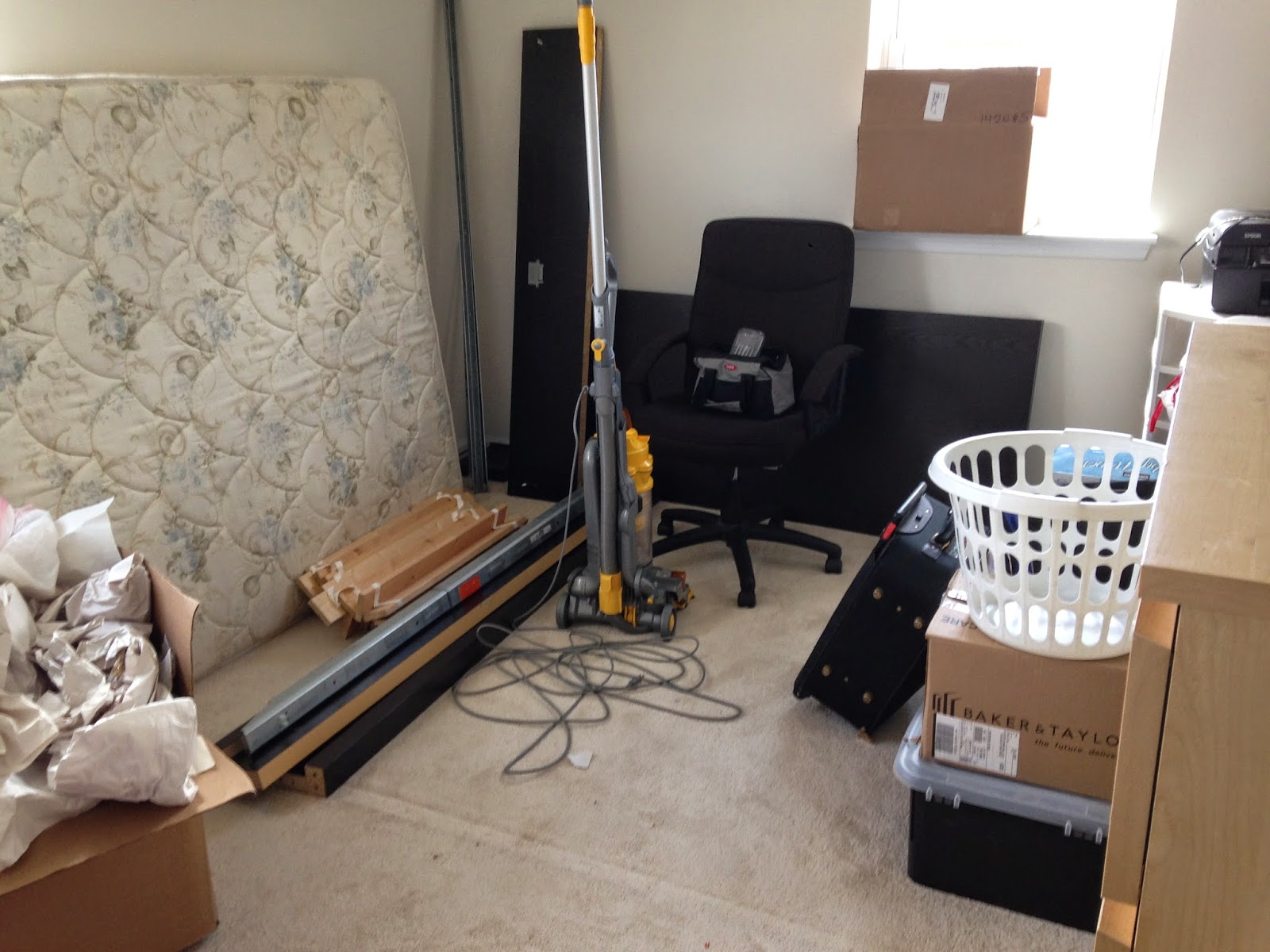 Our bedroom ready to go! 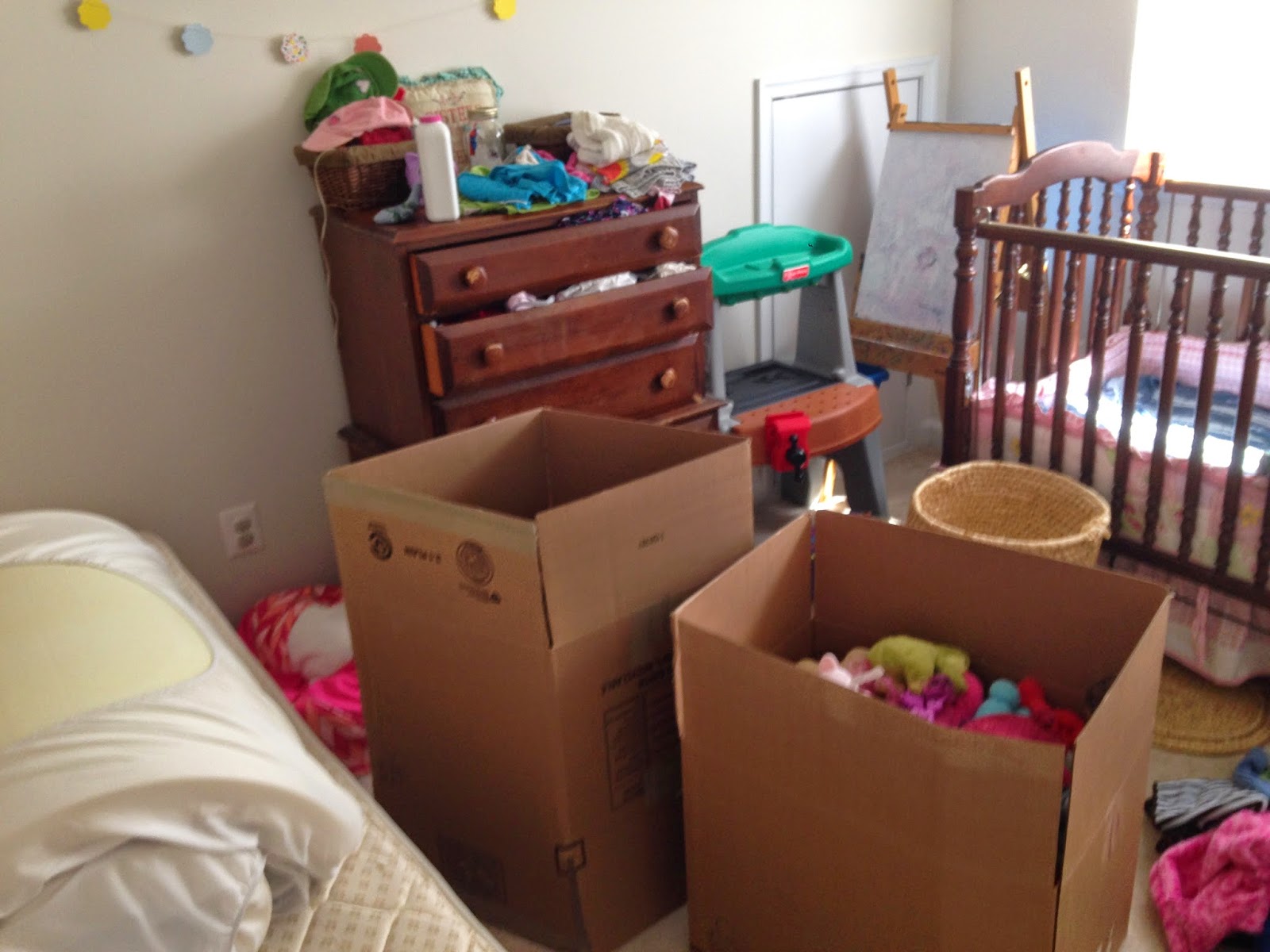 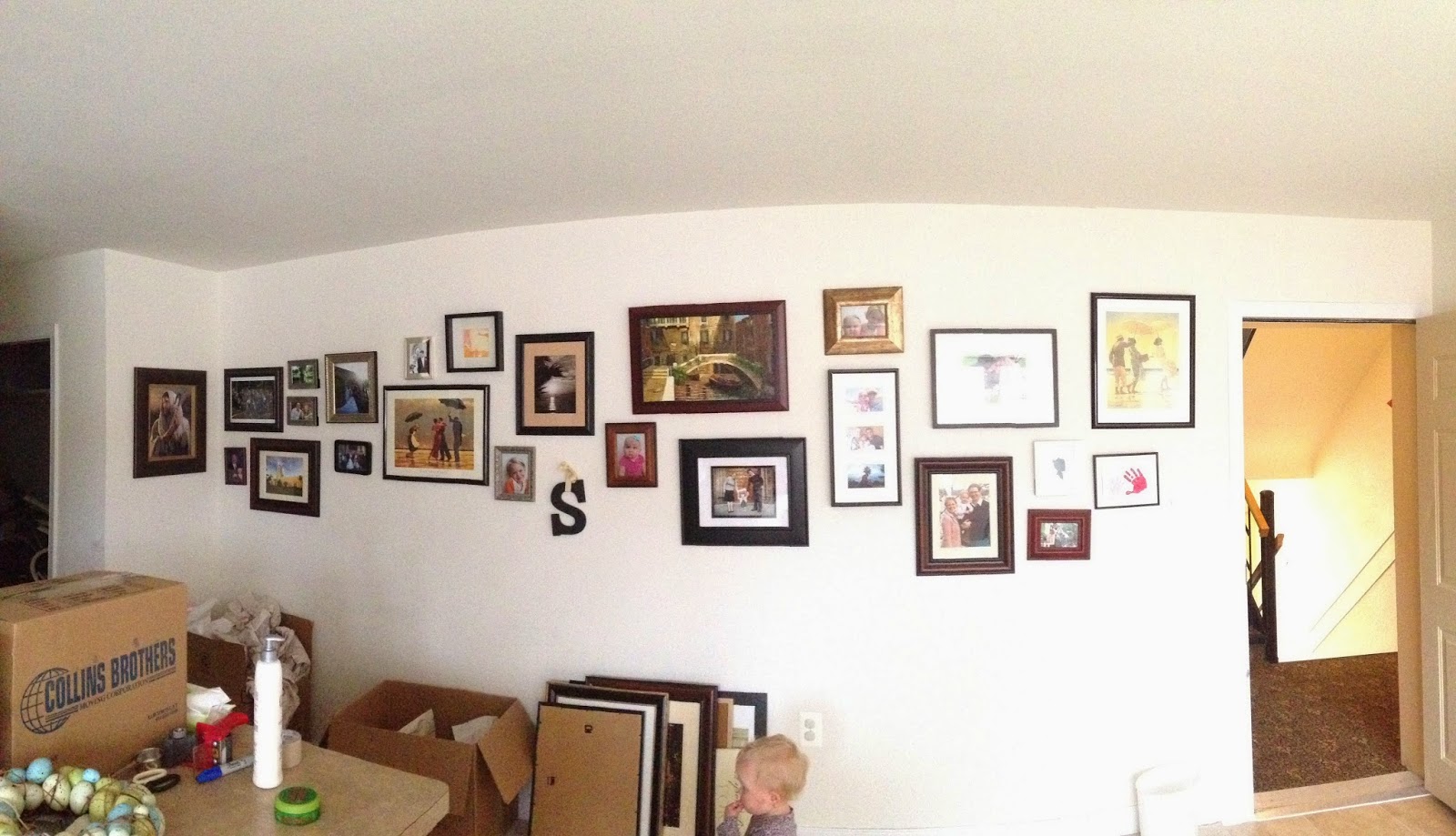 A last picture of my first gallery wall! I started it 4 months after moving into this apartment and it took 3 days to finish. But I have loved it so much!!! Now to recreate it with some kind of twist to fit in our new place. 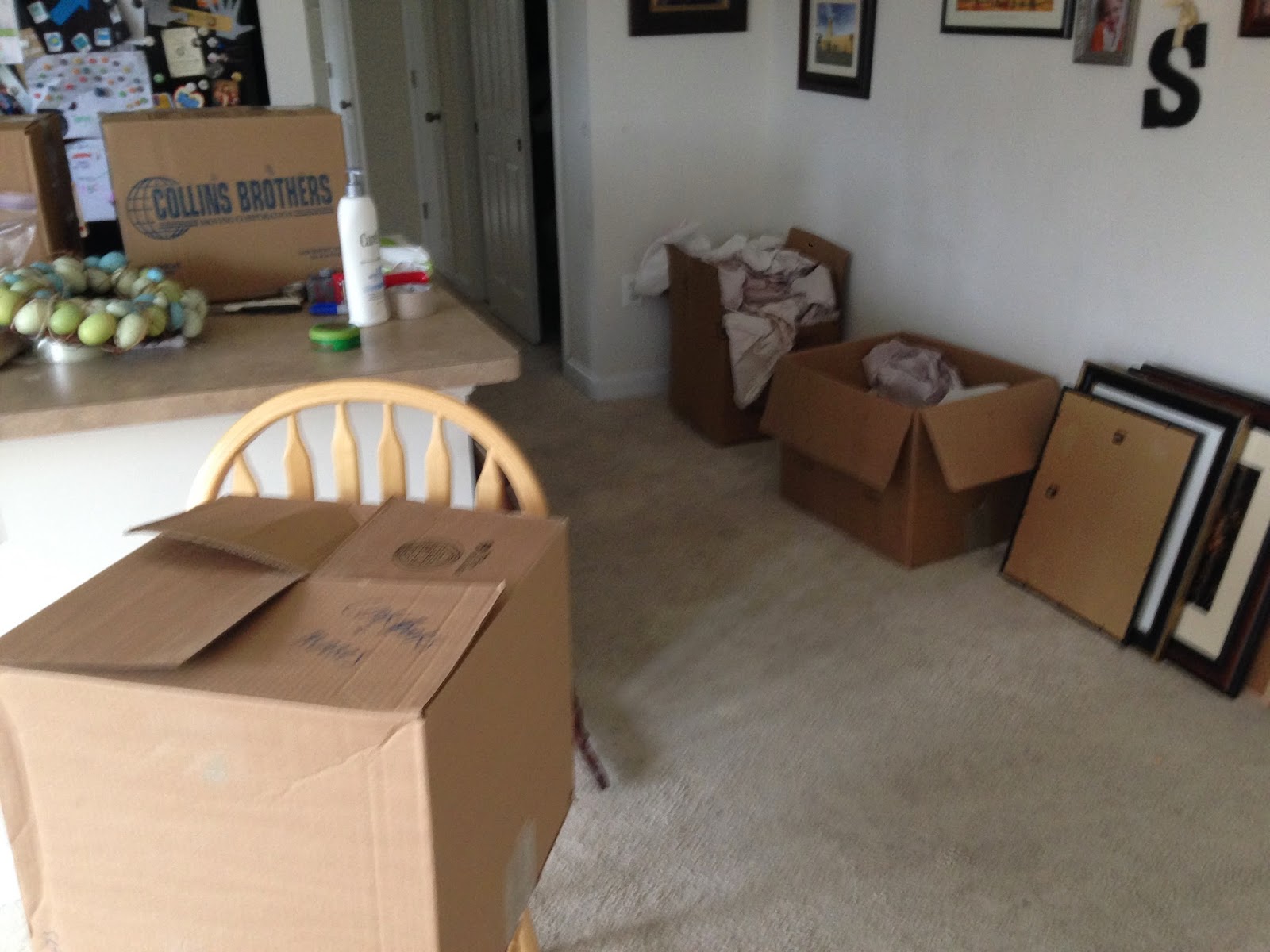 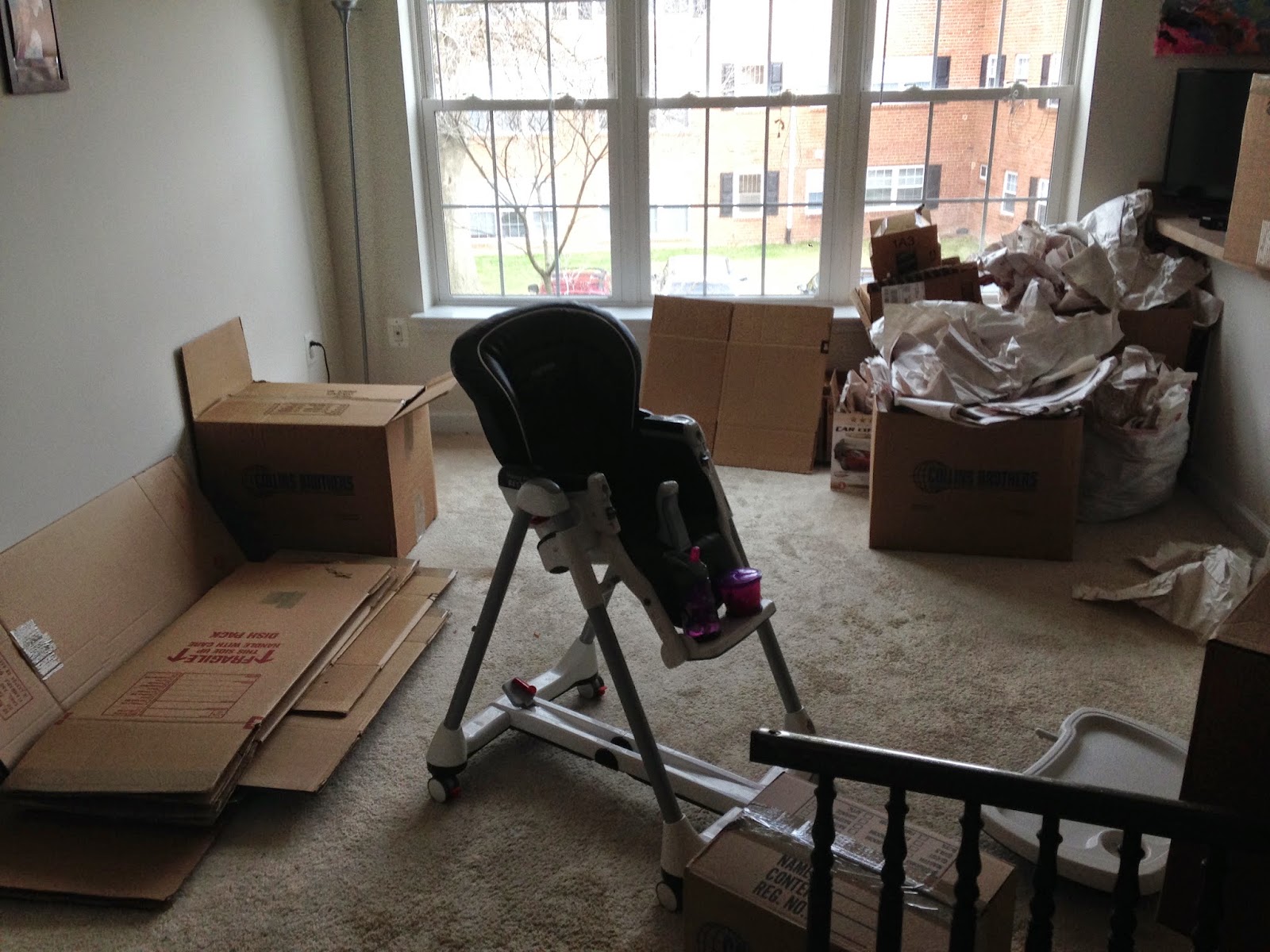 I couldn't believe how much I had gotten done.  We were coming from a 2 bedroom/1 bath apartment and it had plenty of storage that we completely took up. Maybe because we've moved 5 times in 5.5 years of marriage, I'm just too good at this moving game now. Haha!

I was so grateful for the help we received to get everything done. It was exhausting but I can't tell you how completely worth it it has been.

After a week's worth of full time mommy and part time work at nights until 2am,  I look forward to my Saturday and Sundays to really catch up on rest. But because we had moved, I had to push through to Sunday. THEN…..on Sunday morning I wanted to mentally prepare for the upcoming week so when I glanced at the calendar. I was shocked to see I had completely forgotten about how I signed up to feed the missionaries…that day!! Everything was in shambles, boxed up. Luckily I remembered where most things were, it was just a matter of finding the boxes and shifting things around. And I had to think of a meal that didn't require lots of time and attention because we didn't have any of that at our disposal and we really needed to go to the grocery store.  So pancakes and eggs it was! I know, like the missionaries don't eat that all the time on their own (or was that just Tyson who did on his mission??!) I made buttermilk syrup and had piping hot pancakes coming off the griddle when they walked in. It was 7pm by now because our church starts at 3pm this year.  Tyson is amazing at entertaining and I left it to him while I listened with one ear, maneuvered around boxes, and attended to the girls and making the food.

Well, the girls were going a little crazy. I can only say that it was probably the move, visitors, long hours at church, and the approaching bed time that made them go a little bonkers. It was a rough dinner. Not to mention that I was almost all out of all purpose flour so I used self rising flour- no big deal unless you forget to omit the baking powder AND salt. The pancakes tasted a little off but were still edible and the missionaries liked them and had plenty- phew!

Now after the missionaries shared a message about Easter that we loved, they left and my little family stood in the kitchen laughing along with the girls who were now in better spirits. They were having a bed time snack while Tyson was asking me a question while unpacking his clothes for work the next day. Then…..we heard the giant spill……

I held my breathe. As I turned around, Hadleigh was covered in BUTTERMILK SYRUP!!!! And so was our kitchen floor. With boxes everywhere now splatter with stickiness, I surveyed the mess. I tried….like really really tried to laugh about it. We had managed to laugh our way through the night and I remember cracking a little smile, trying to muster up a laugh.  But it quickly turned to a frown and I burst into tears. I covered my face and fell on the ground. I only allowed myself to break down for 30 sends because that was all the time I had. So I got up and got to work. Tyson had dropped everything and was already being my knight in shinning armor by cleaning up the mess. I peeled of the jammies now soaked with syrup form Hadleigh and cleaned her up. Luckily, the jammies she had on were oldies with holes in the toes, having been a hand me down from my sisters neighbor, my niece, Taryn and now Hadleigh. I had no problem tossing them in the trash. That "little" event had just broke the camel's back.

Once everything was cleaned, the girls were put to bed at 10pm, when their usual bed time is 8pm. Tyson and I had to continue unpacking a few more things to prepare for Monday morning so by the time we were in bed, I think it was midnight. I was beyond mentally and physically exhausted and sore from the whole weekend. The next week dragged on as the boxes seemed to just multiply instead of disappearing after unloading them. I felt like our functioning level moved to "Survival" mode. I have grown very appreciative of weekends and what it means to recharge your batteries!!! 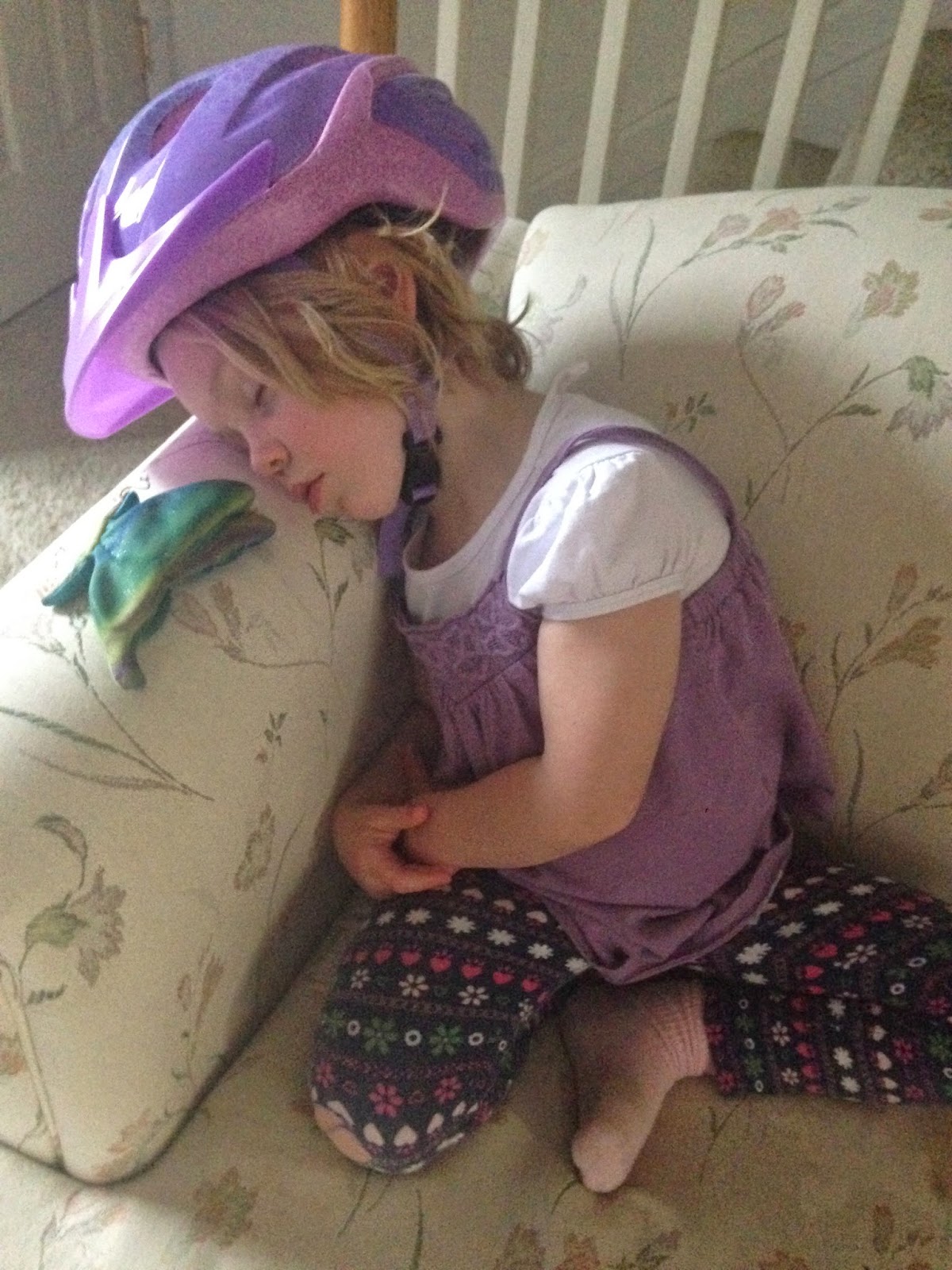 After one very hard day for Taryn, she crashed on the couch, no time to take off her helmet from scootering! 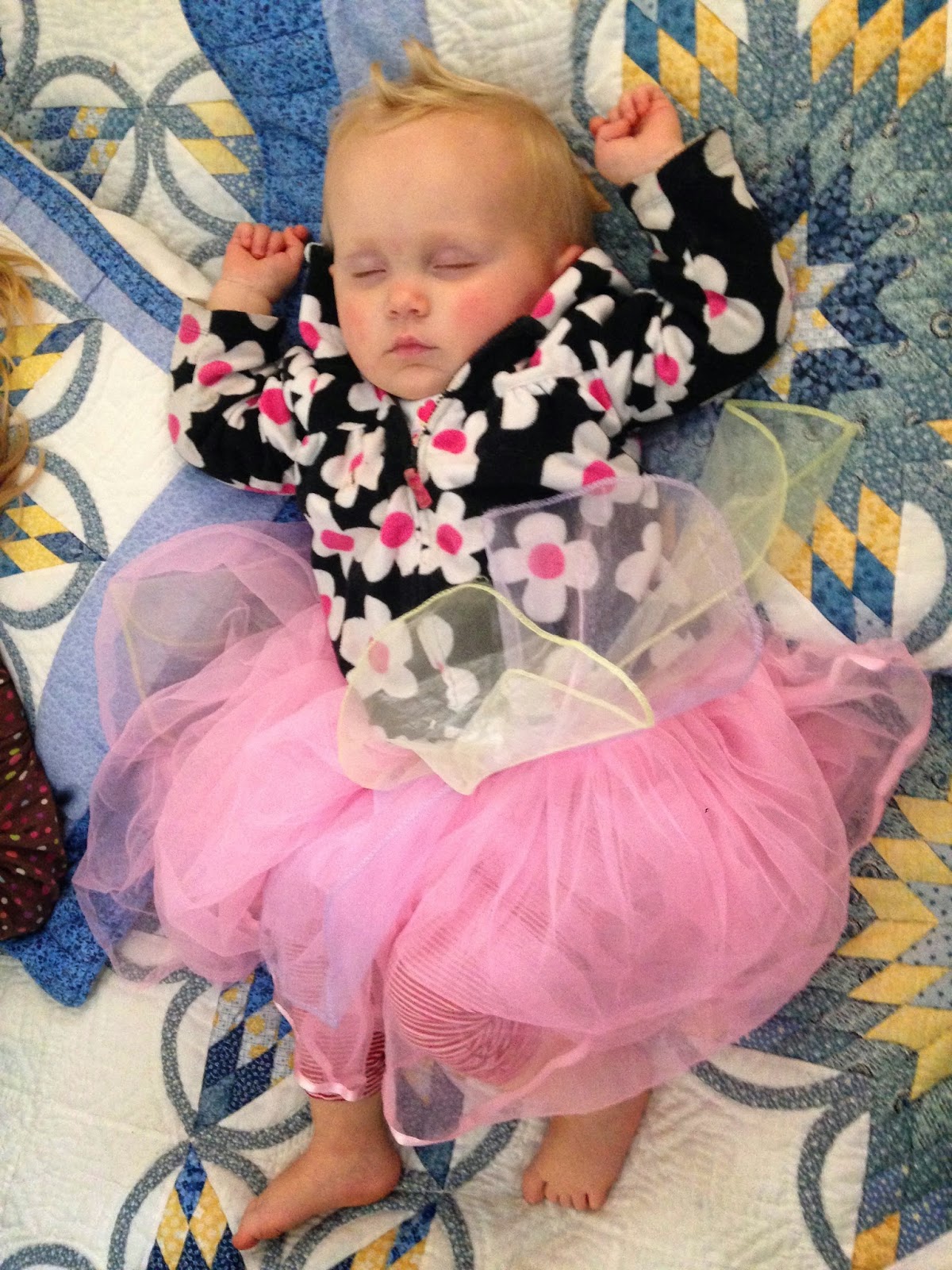 Exhausted from playing all day! She crashed on my bed before I could get her into her crib.


So the past 3 weeks have been a blur, but things are settling down, yay!!!! Tyson took his big Customs Exam yesterday!! This test was a big financial decision for us and Tyson put so much mental preparation into it. I am so proud of him and all his hard work, requiring nightly studying, LONG practice exams, and classes that took up his Saturdays. Now we wait for official results….