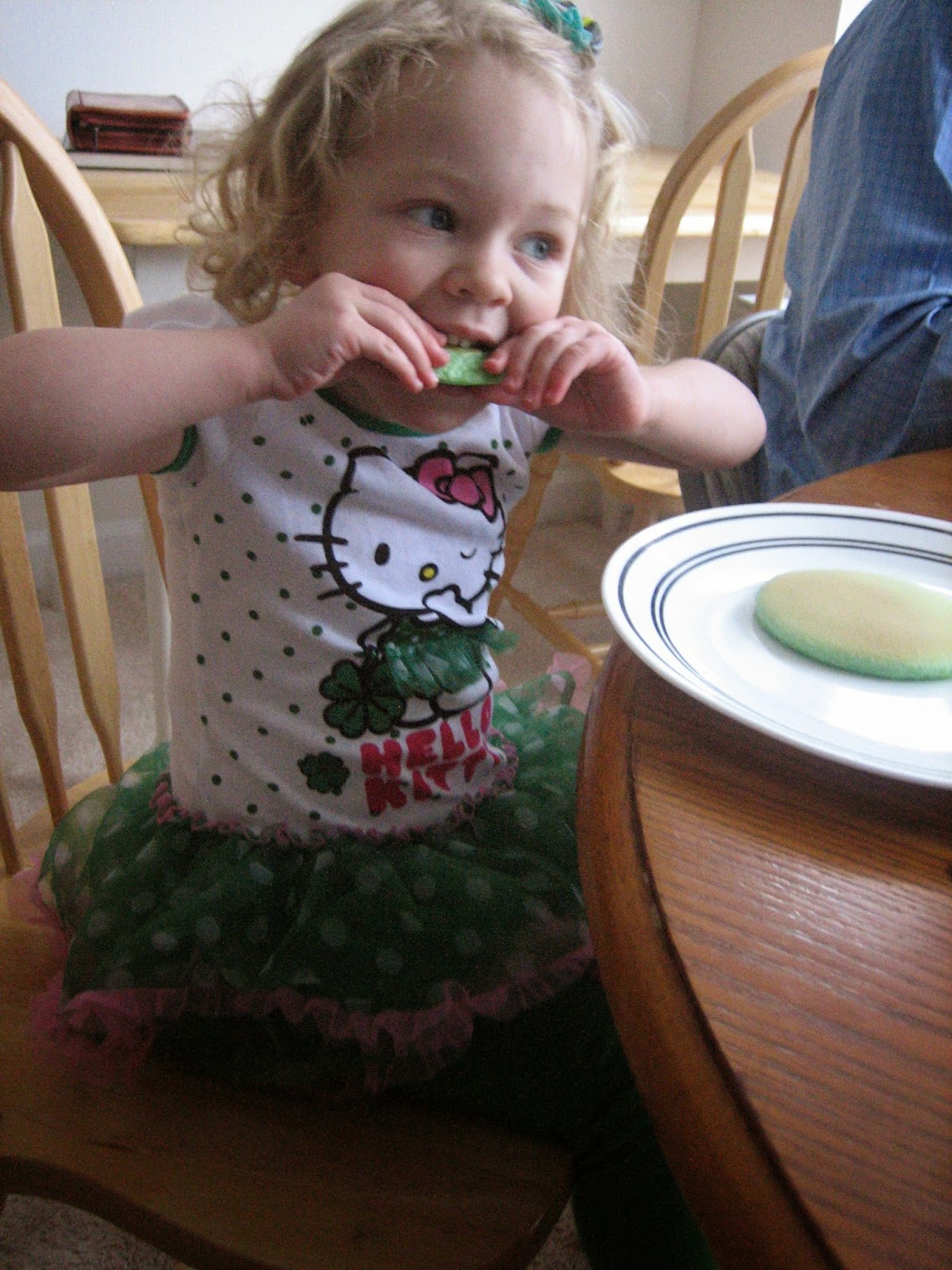 Although we were hit with another snow storm last night (WHAT?! It's the middle of MARCH!!!) and spring is in hiding for the next few days, we enjoyed our St. Patrick's Day to the fullest. I was super bummed all weekend knowing that this snow storm was probably going to cancel my turn for Preschool. I had fun crafts and fun green foods to eat. But just because no one else could come doesn't mean we skipped out on the fun! This entire day started off great with green pancakes, prepping my first corned beef & cabbage dinner ever (which rocked!!!), and lots of rainbow & shamrock crafts for Taryn.

Taryn was loving the camera this morning.
She gave me the best expressions and I'm so glad I just kept clicking away and laughing. 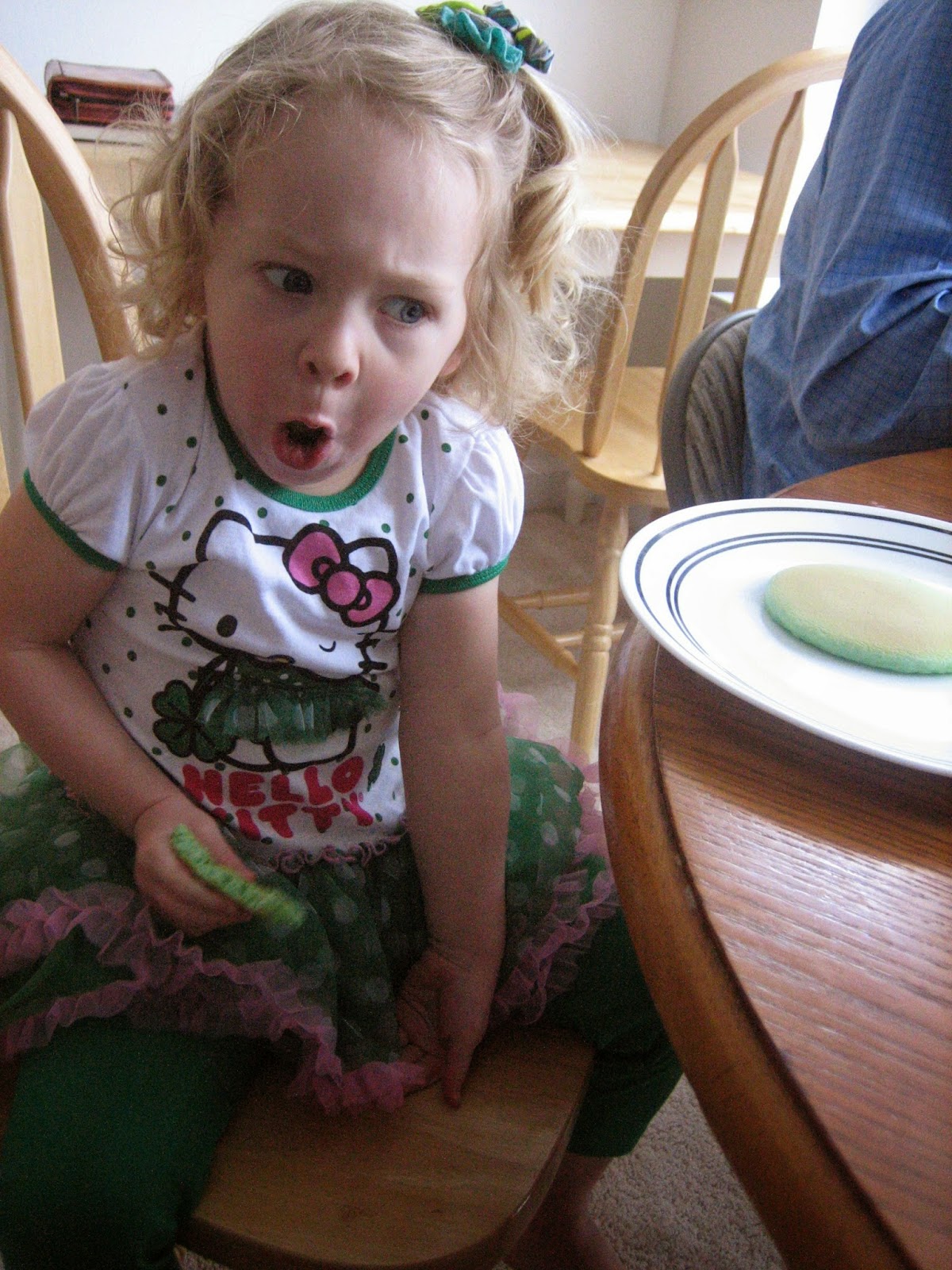 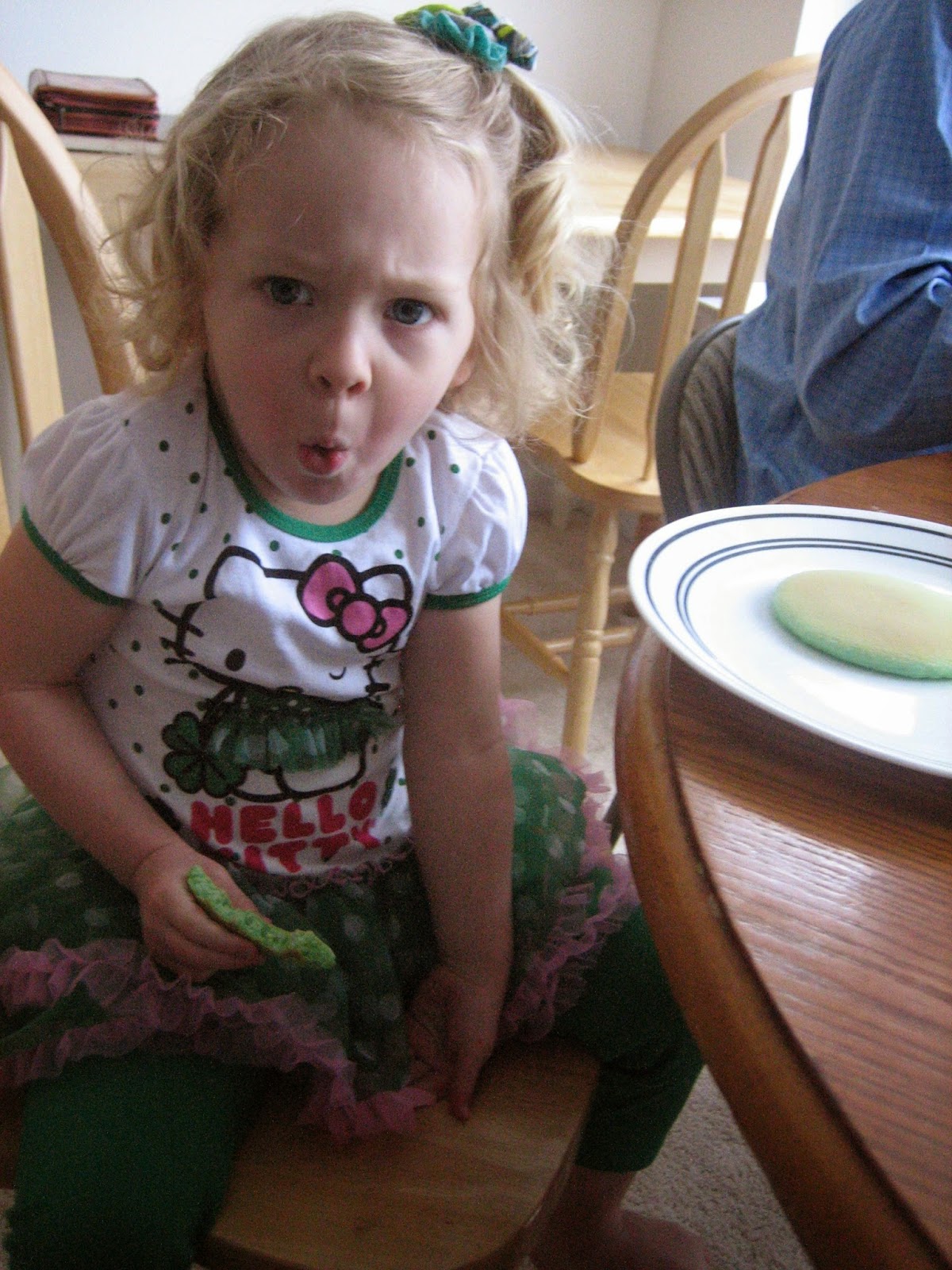 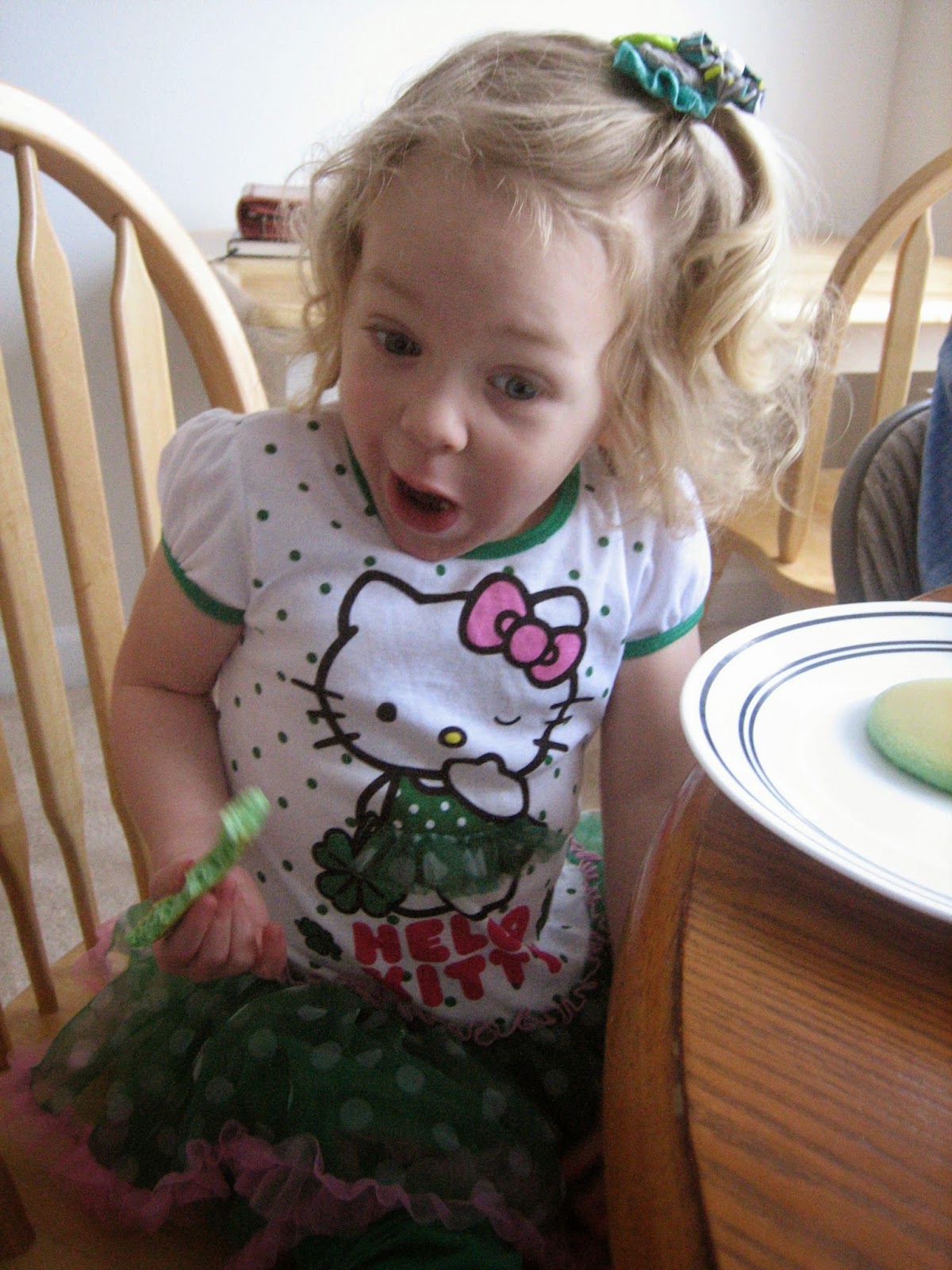 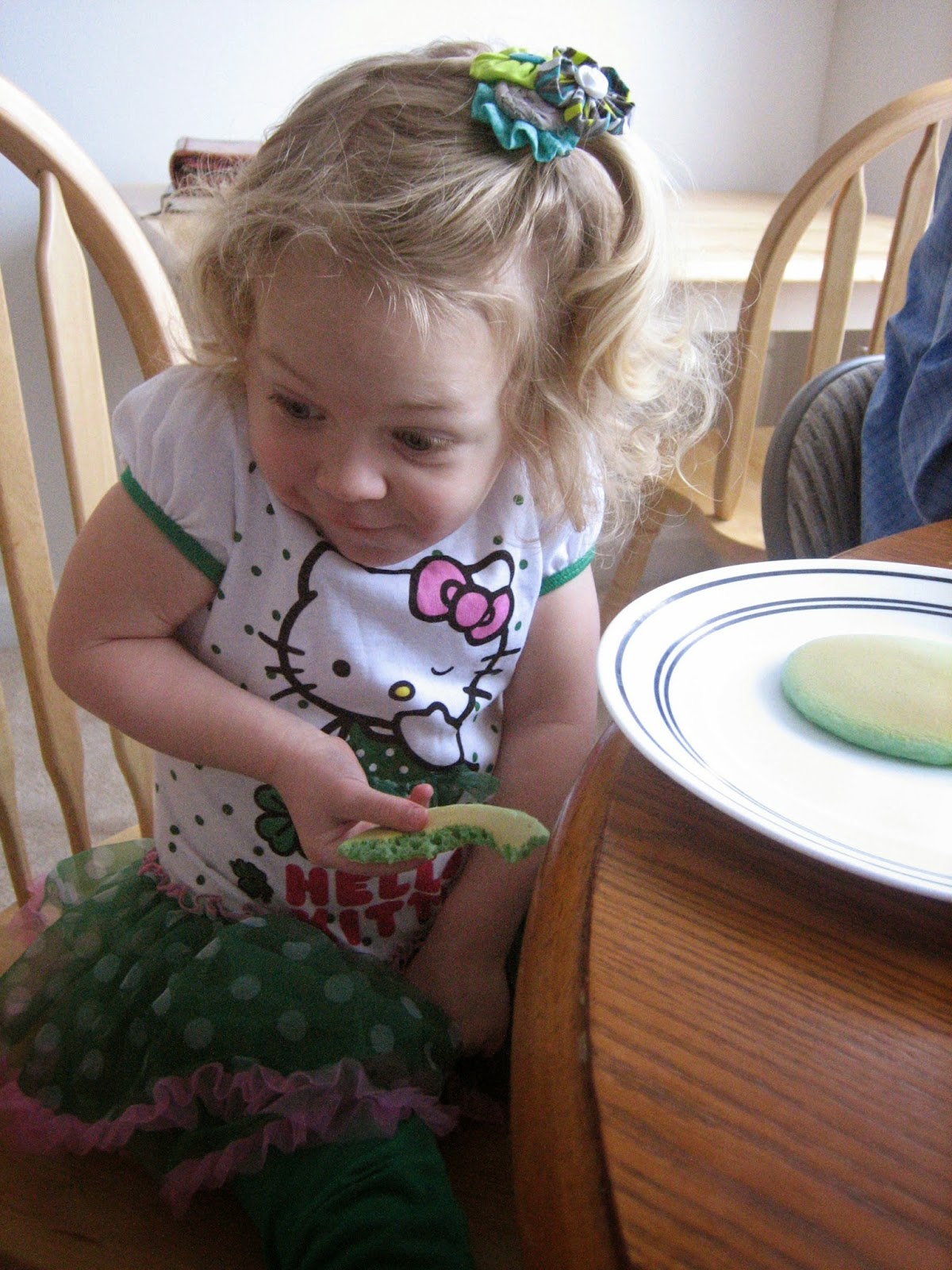 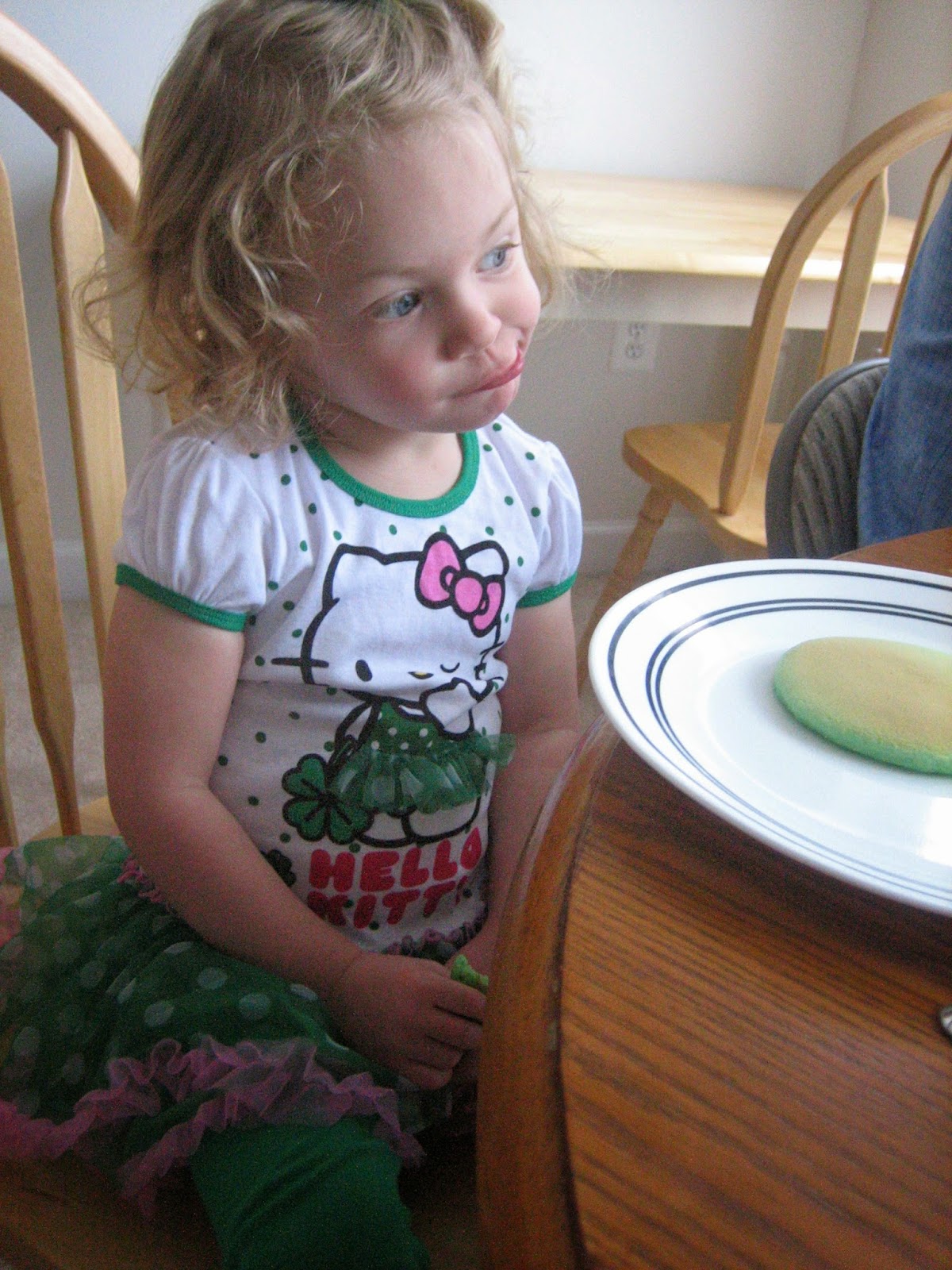 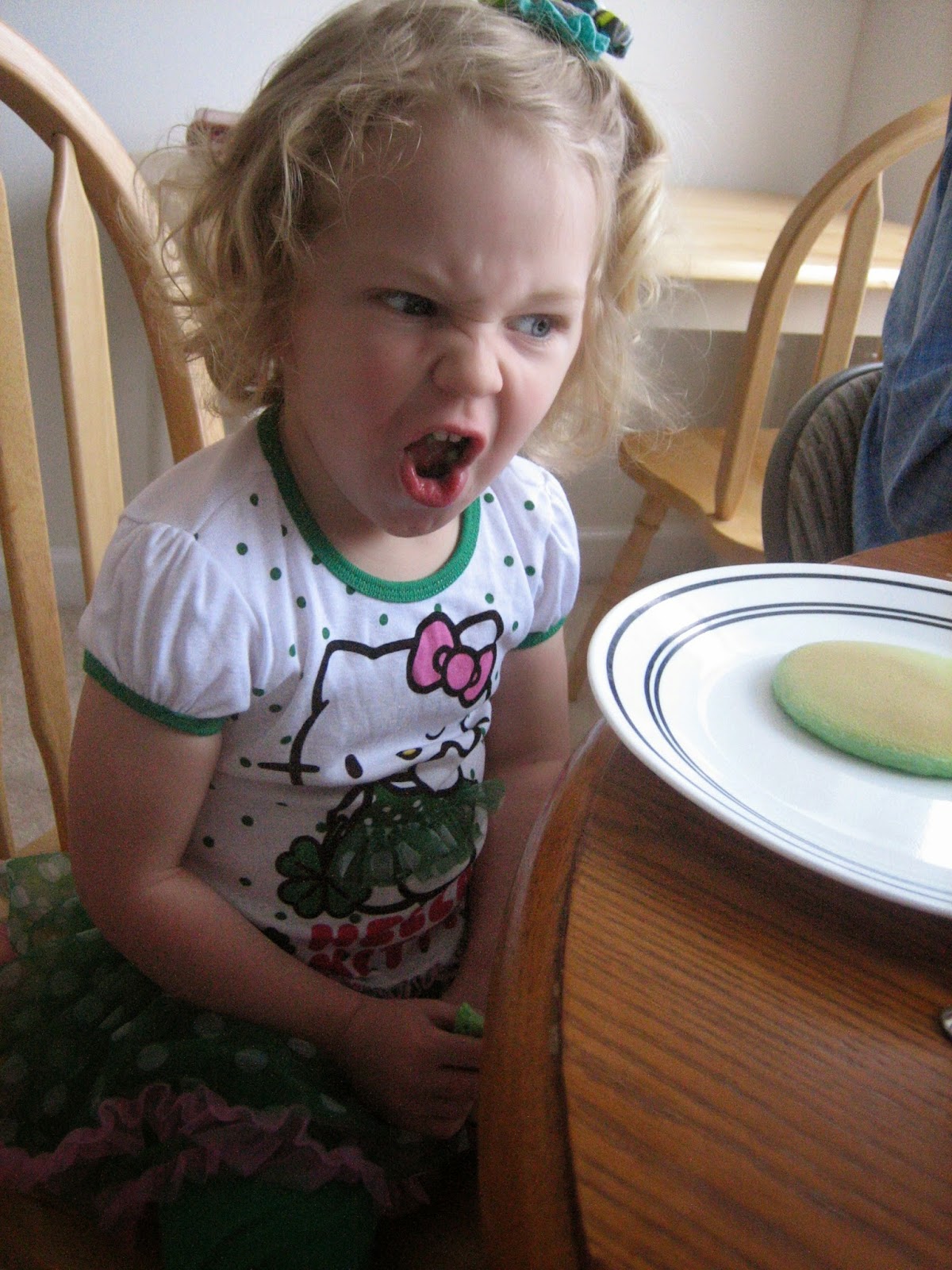 Then Taryn asked to take a picture of me. I kinda love this one because it shows our morning (and Hadleigh's cute clover leggings I got for $0.73 brand new at Old Navy!!!) Everyone else was dressed and ready to go, and I was still in my pajamas (the one that got the girls dressed & made breakfast & Tyson's lunch) I guess deep down because I knew it was a snow day, I wasn't rushing my shower/ changing before breakfast. Actually, it was really fun to have a snow day on a holiday. I was fully prepared with fun foods & crafts so the day went by fast and we had a lot of fun :) 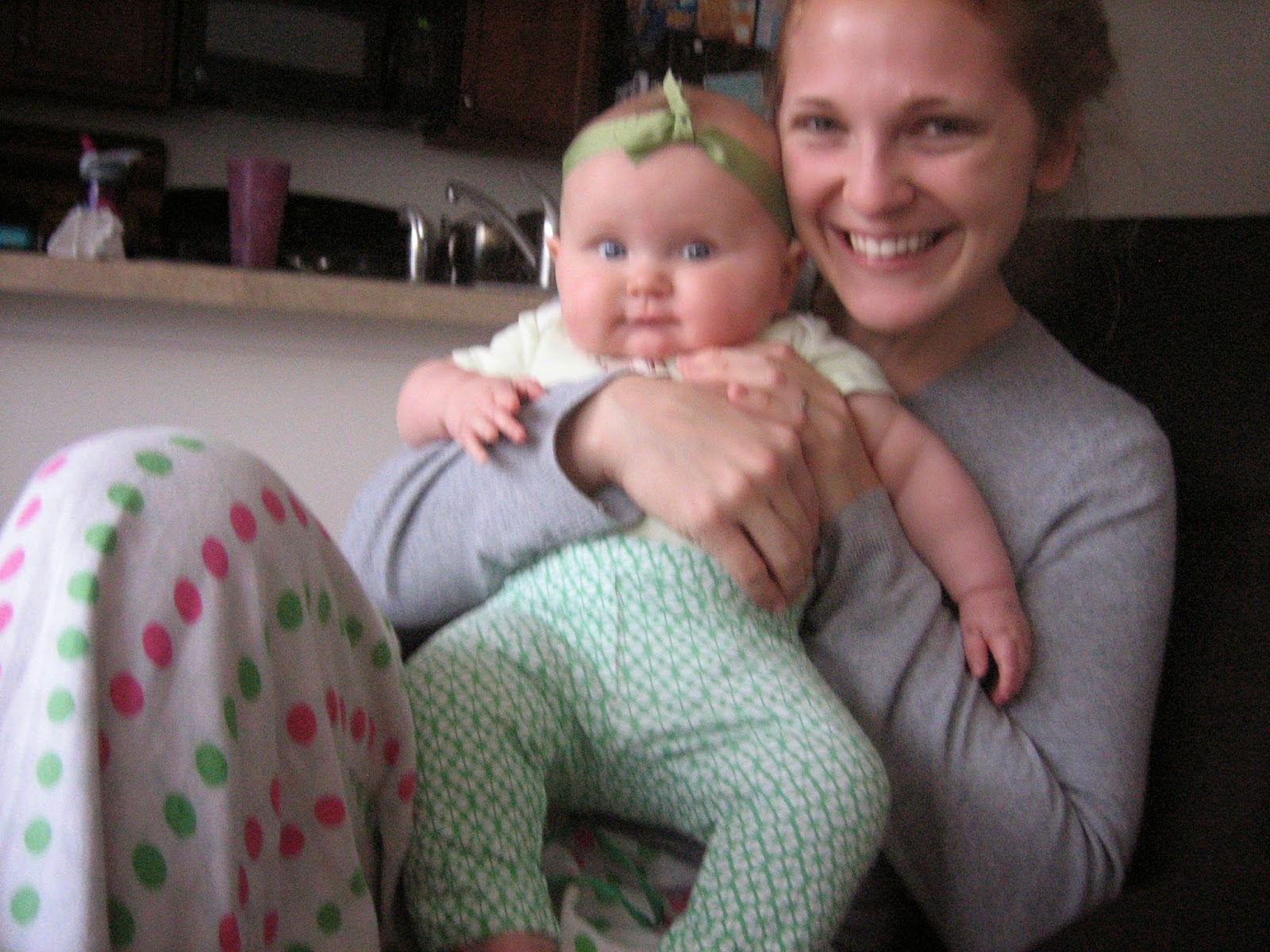 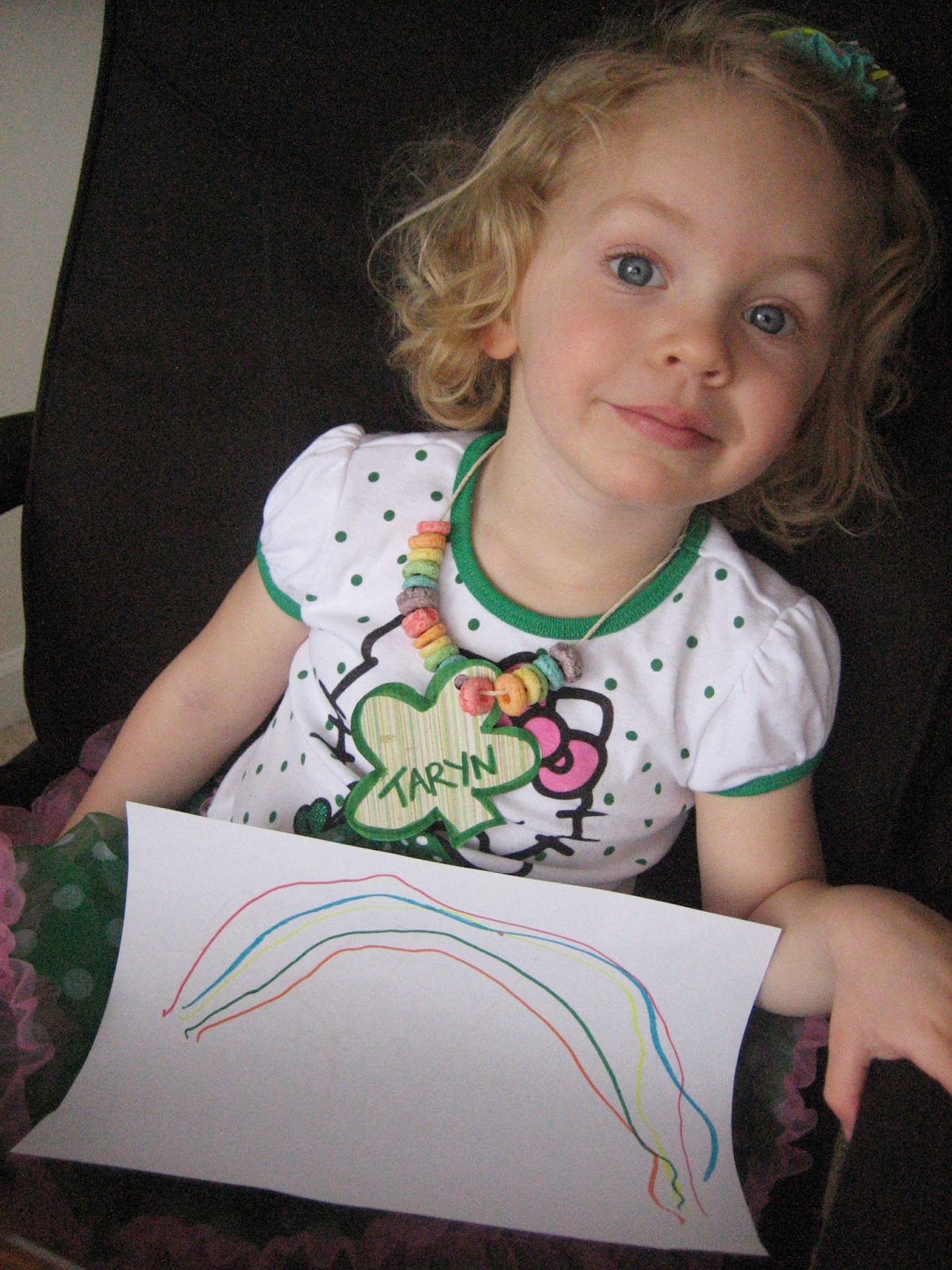 Some of the crafts
Rainbow fruit loop necklace (she preferred to eat them but did manage to string some of the cereal on!) We sorted out the colors, talked about the colors of the rainbow and the order they appear.
Drawing her rainbow- although her colors ended up out of order/overlapping, she still made a great rainbow. Taryn is not a big fan of sticky hands so she wasn't keen on the glue & tissue paper for her clover- oh well (Taryn's is on the right) 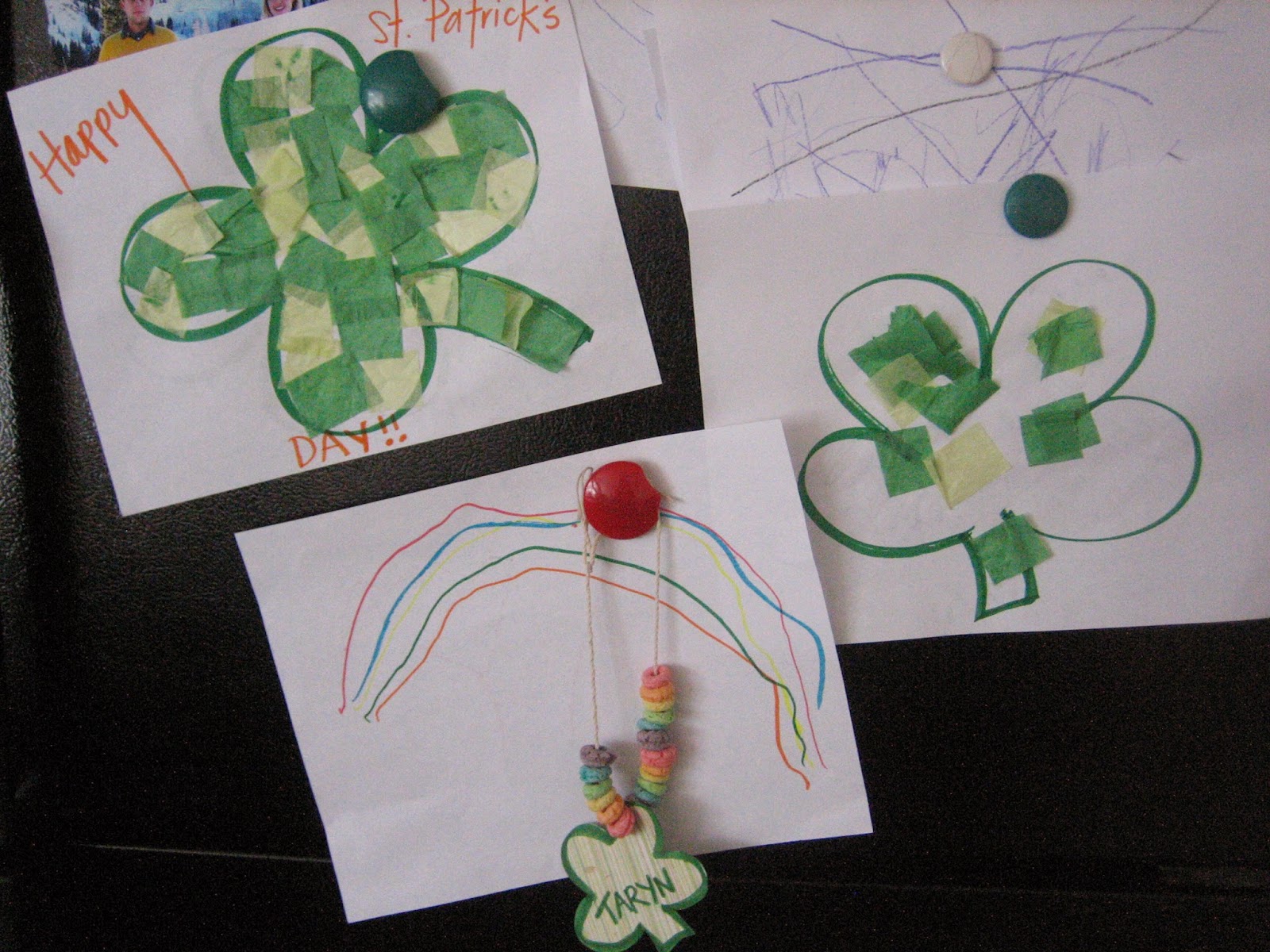 Later on in the day we spent time at our friends house for a little gathering. Taryn twirled in her little green tutu and showed off the shamrock necklace I found just moments before leaving the house. It was a birthday present from the Grandma Scott who recently passed away in January. I'm so glad I happened to pull out an old bag of jewelry that has been packed away forever and that I decided to sort through it. Such a fun find! Taryn was in love with the necklace and wanted to show everyone!


Tyson and I ate a late dinner of corned beef & cabbage due to the delayed transportation but it was still delicious! I decided that I will make that meal every March 17th and that I will be trying to make Irish soda bread next time too.