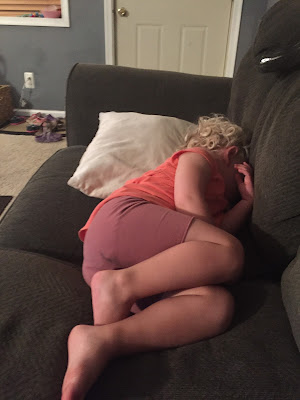 ^^^
That's how I've felt this past few weeks- just like Haddie napping after a long day. I've been so tired from working nights, the girls having bad dreams and waking up a lot, the humidity and heat being unbearable and me just wanting to stay inside to play.
I really don't enjoy being home so much because the sunshine feeds my soul, and my kids. Everything has been a little off because we haven't been able to go outside much lately. I know if we had daily access to a pool (or the beach!!!)  it might be different but we're trying to keep things interesting despite the hot hot humid weather. Car rides are hard because without a garage, our car gets HOT and it takes awhile to fully cool off. I don't blame the girls and their recent complaining of having to run errands. I promise, I don't want to go outside either.
Thankfully, this week will be in the low 80's with little humidity. Perfect for my morning runs (which makes me happy) and lots of outside time for all of us. I'm so very excited! 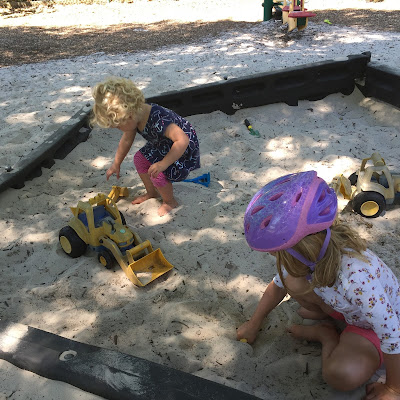 Two years ago a took a very similar picture of both girls in the same sand pit, Haddie with her feeding tube and Taryn was just barely 3 years old. The weather in August 2 years ago was fantastic, so I'm wondering why August is not cooperating this year! 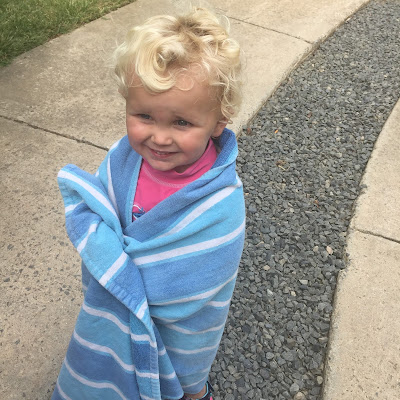 Swimming' babe!
Thanks to good friends who have us over to swim. We love them and being wet in the Summer. 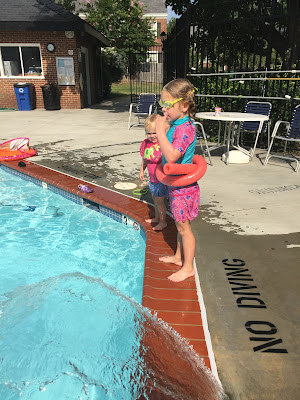 This was right before they jumped in several times together. Haddie beating her fear of jumping in by herself and Tayrn being a pro a swimming.
*She does have a noodle around her waist in this picture (more for play and learning to tread water in the deep end) but she is a fantastic little swimmer and is totally capable of jumping in and swimming by herself. 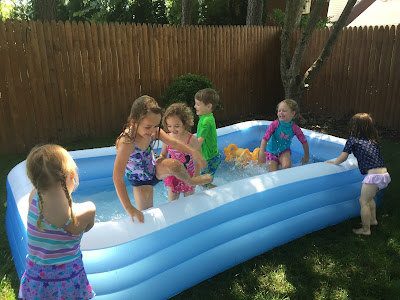 Even blow up backyard pools rock, especially with friends! 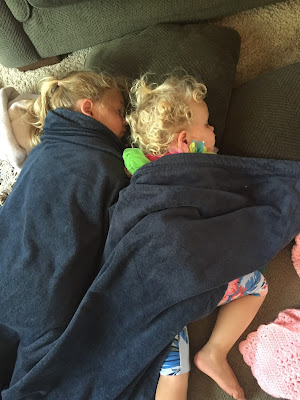 Sleeping buddies. There has been such a great break lately of fighting for them. Yes, they still push each others buttons, but it really hasn't been as bad lately. If they can play together for almost an hour without fighting, I think that's a total win. I love hearing their giggles, make believe stories, and watching them dress up. They are the cutest sisters. 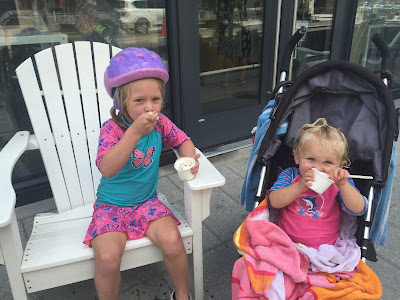 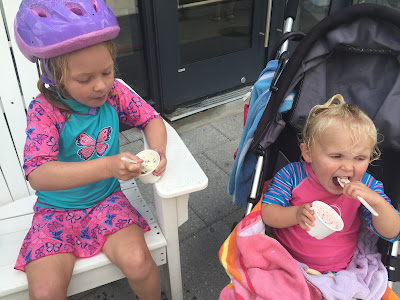 I have to admit that when Summer hits, I'm a sucker for a quick ice cream run (normally McDonald's $1 cones) because it just helps on those hot days. I don't even need to order one because the girls will eat about half and then ask me to finish off the rest of the ice cream for them so they can have just the cone. So I get a whole ice cream without even having to pay for one. If Tyson is there, we just wait patiently until the girls say, "I just want the cone!" and we split the job of finishing the ice cream. It's a pretty tough job ;) 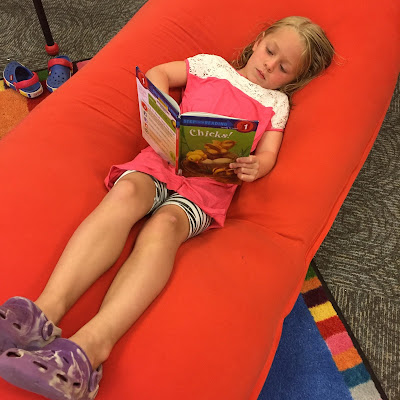 One of her favorite spots. The new bean bags at the library. 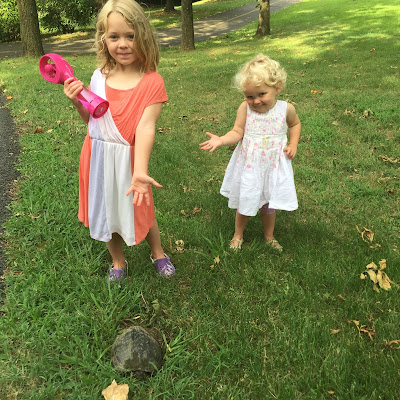 On one of our early morning runs, another runner (seeing that I was pushing a double stroller filled with two kids) pointed out a turtle to us on the side of the trail. We spent about 5 minutes watching him and trying to agree on a name. The girls wanted "Contee" and "Snap." 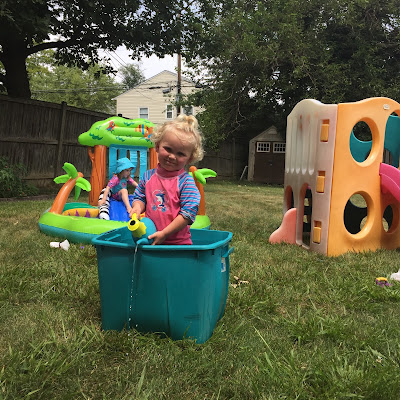 Nothing's better than a bucket full of water to sit in :) 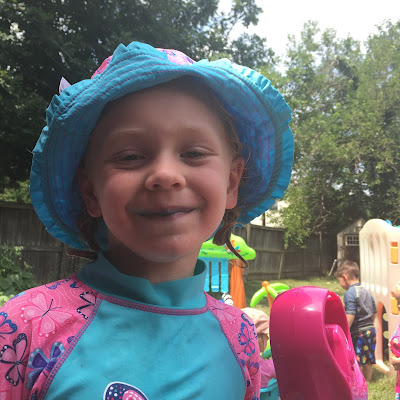 Big backyards are rare around here. So when our friends have apple space and invite us over for a blow up pool party, we are there! Shaved ice is the cherry on top! 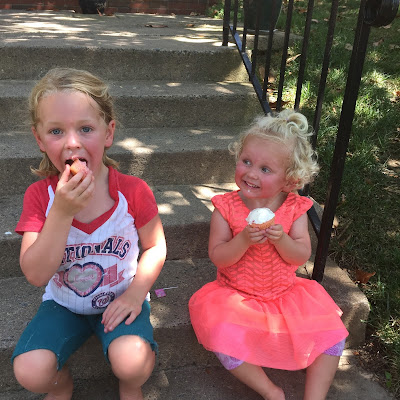 A fun birthday party for one of Taryn's preschool friends. Just look at those red faces. It was sooooooo hot that day. The hostess did an amazing job at freezing fruit for a cold treat, having mini paper fans as the take away, and putting the party under lots of shady trees. We were hot but the girls had fun seeing friends and jumping in the bounce house. 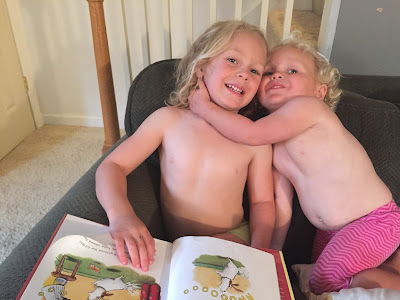 Pardon the nakey girls :) I just love those moments when they snuggle up together while Taryn "reads" a book to Haddie. She's learning her phonics and picking it up really well. 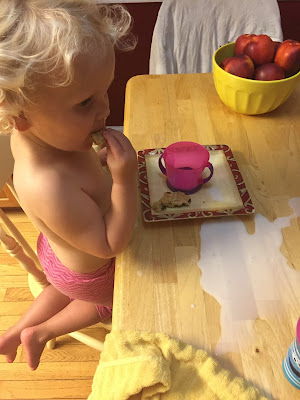 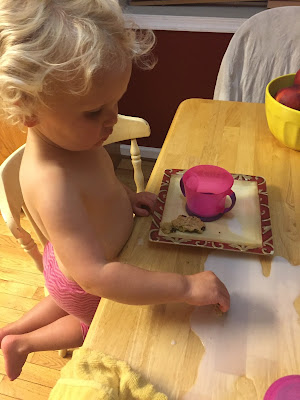 No need to cry over spilt milk. Just dunk your cookie in it :) 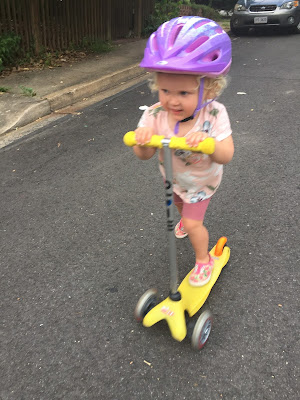 When it's too hot to go outside during the day, we turn to scootering on our street right before or after dinner. It's a little more bearable when the sun isn't directly overhead- but still so humid. 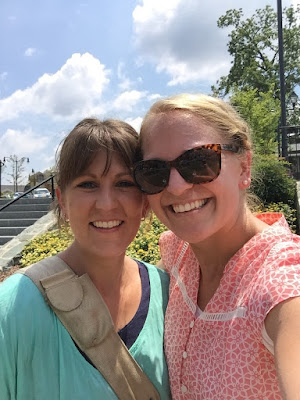 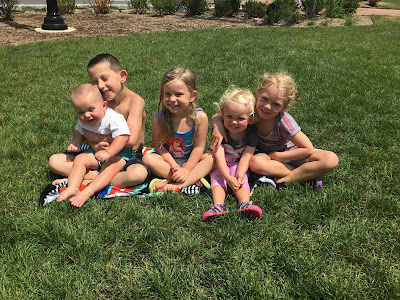 A few weeks ago I met up with a college friend from Arizona. Sarah and her family moved to Fairfax for a time and we were so excited to introduce our kids to each other. It's fantastic that you can connect with someone via social media and feel like you haven't lost much contact with them. It had been 7 years since I had last seen Sarah (just before her 1st child was born.) I love great friends who inspire you to do good and be better.